Nighttime photo excursions worth the effort


Sometimes one is too tired at the end of the day to take the time to go out and shoot nighttime pictures.

Nevertheless, the Friday night of our West Coast October 2012 trip, we decided to head out and enjoy the scenery, but managed to only get three of four great sites into our schedule.

The fourth shot would have been in Marin County on the hills above the Golden Gate Bridge which overlook the City by the Bay, but we didn't get there.

But the other three are well worth the effort.

Our first stop, which was nearest our motel on Columbus Ave., in San Francisco, was Coit Tower. The location offers a spectacular view of the Bay area from the Bay Bridge on the east to the Golden Gate on the west.

At night, the tower offers a great shot in and of itself at nighttime. We walked around the area, taking a few shots. Upon driving up the hill to Coit Tower we discovered that the city has begun prohibiting parking in the area on Saturdays and Sundays. And I understand parking tickets are about $78. 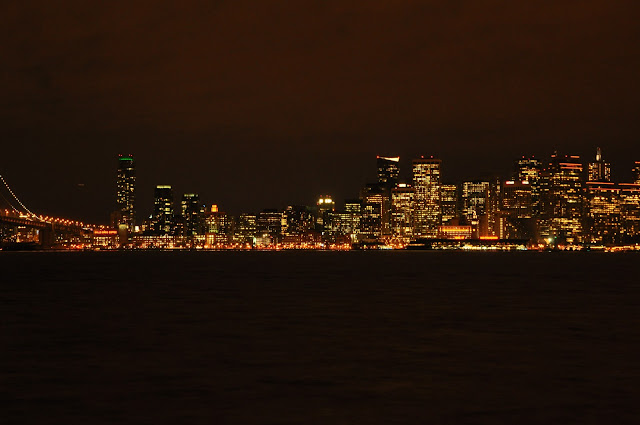 We then headed out to location No. 2 -- Yerba Buena Island. We took the Bay Bridge toward Oakland, and were in the far left lane of the five-laner. Even for a Friday night, traffic was heavy.

I didn't know if the exit to the island was to the left or right. I worked my way over to the far right lane thinking we would exit from there.

I was wrong. The roadway sign indicated the exit was to the left, so we made our way back through heavy traffic  to the left side.

Our last destination was Twin Peaks, far to the west side. One can take Market Street from downtown and follow it seemingly for miles and miles. It turns into Portola and then just follow the sign that says Twin Peaks exit.

We missed the turn and realized that, after heading down the hill toward the coast.

We retraced our steps, and amazingly, there was an easy to observe sign showing us the way.

The winding drive took us to the overlook that had hundreds of other tourists with the same idea.

That nighttime trip wasn't the first time we had visited those locations before, but it doesn't matter how many times one visits those spots, its always an adventure. And what a view from each!