Journey continues among the 'giants' 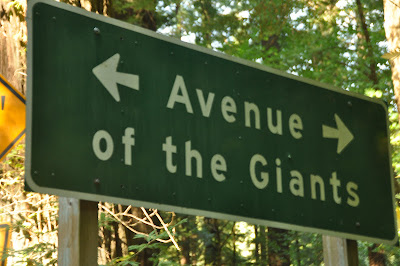 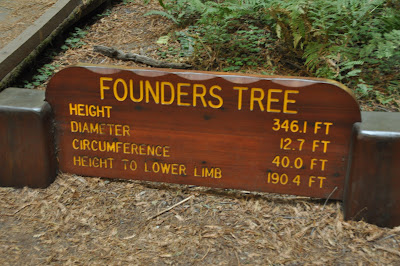 The good, the bad and the interesting.
A drive in northern California offers nature’s finest in the viewing of the giant redwood trees.
And then man has to put his signature on what Mother Nature has perfected.
California route 254 runs throughout Humboldt Redwoods State Park along a stretch of trees referred to as the Avenue of the Giants. And there are giants everywhere.
The stretch of road extends southward from Fortuna to just north of Garberville and parallels US 101. 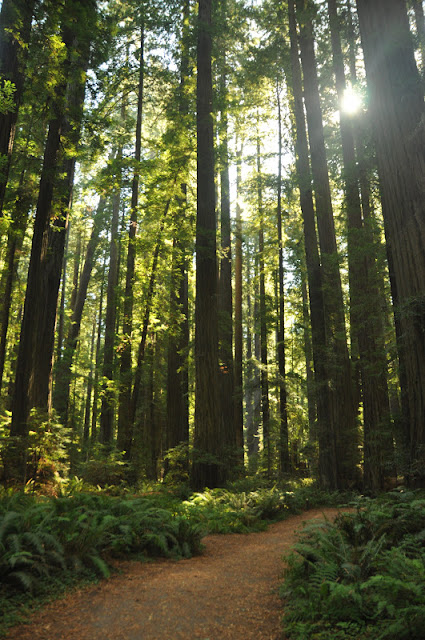 One can view towering trees still stretching toward the sky, those that have been hit by the wrath of Mother Nature and man, and a few that draw thousands because of the unique cutout that allows motorists the experience of driving their (small) vehicles through a tree. 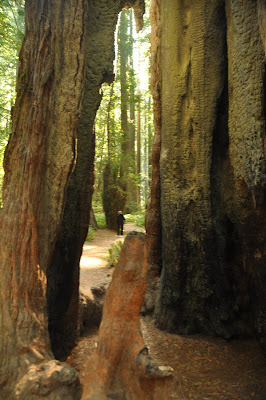 Wifey and I decided to take the half-mile walk around Founder’s Grove which is easily accessible to those with handicaps. The Founders Tree, which is 346 feet tall, is featured. We took our time on the trail, taking in the beauty of the giant trees and the foliage along the ground.
Among the trees was another fighting for life although hit by lighting and heavily damaged by fire. 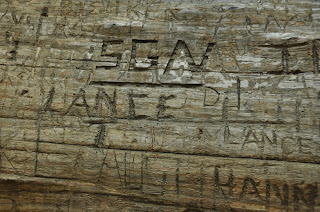 And then one comes upon the unnecessary signs of man’s visit --  an abundance of names and initials scrawled into some of the behemoths. 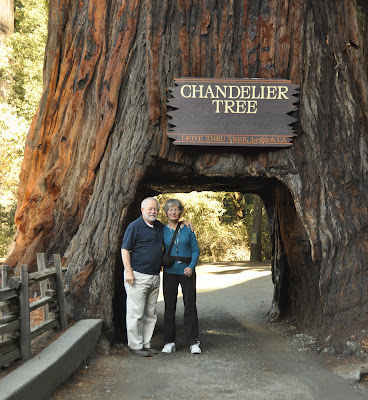 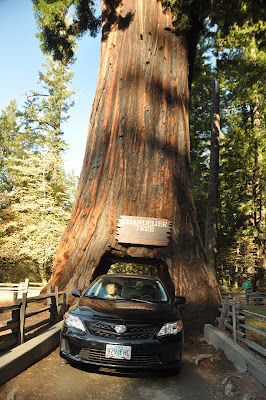 And as we motored farther south, we decided to pay the price and visit the drive-through tree, referred to as the Chandelier Tree. Although not in the park it was still an interesting experience. There is a small fee that allows access to the area which also offers a souvenir shop, a lake and picnic area.
But nonetheless, a visit among the giants was, as expected, an awe-inspiring visit.
Next post: Nov. 6, 2012

There are big trees.

And then there are BIG trees!

To find out the difference, one must travel to northern California and visit the three areas that host the largest stands of redwoods.

The three areas are: 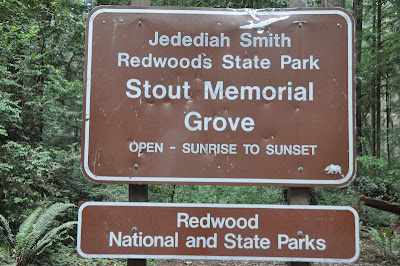 -- The second is the Newton B. Drury Scenic Parkway which passes  through Prairie Creek Redwoods State Park, an area that begins about six miles south of Klamath, CA on US 101 and the third:

-- The well promoted "Avenue of the Giants," a 31-mile drive through the heart of Humbolt Redwoods State Park, that runs just north of Garberville to just south of Fortuna. The road parallels US 101. 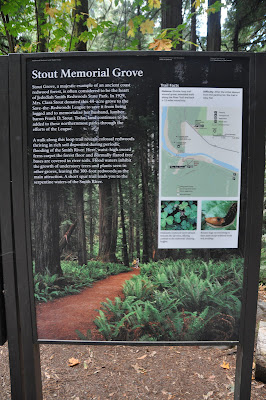 On a previous trip to the northern coast, my wife and I only got as far north as Mendocino. For years we have thought about making the trip farther north in order to see the big Redwoods.

Earlier in our trips out west we did visit Sequoia National Park in southern California which hosts stands of giant trees.


But this most recent trip was dedicated to the northern area and also touched on Oregon, going as far north and spending the night in Coos Bay.

We stopped in Crescent City and visited the park visitor's center and garnered information on what to see.


The ranger wanted to know in which direction we were going and what was our destination for the night.

We told him it was Eureka, which was to the south. I don't know that I should have said that, but everything worked out OK.

It was about 3 p.m. in the afternoon and I guess he wanted to make sure we reached our nighttime destination before the sun went down.


He directed us to the two stands of redwoods that were farther south, telling us that if we visited them, we would have seen two of the three largest stands of trees.

I asked him where the third was and he indicated it was just a few miles away.  I had previously read an article on the internet about such a stand just south of the Oregon border.

I asked for directions and am I glad I did.

We immediately headed to the Jedediah Smith park and were extremely impressed.

The byway was a six-mile gravel road that had a speed limit of just 15 miles per hour. But who would want to go any faster.

Those traveling the area will find it hard to drive faster, not just because the road isn't built for a higher speed, but that the trees are so awe-inspiring, one must take it easy just to be able to grasp their grandeur.

The road's path was determined by the location of the giant behemoths as it wound in and out, among and around.

The trees look even bigger when one gets out and has their picture taken with one of the giants.


We took our time, and even though the sun was going down, we had plenty of time to experience that park as well as Prairie Creek where we saw a herd of elk.

We spent the night in Eureka and the next morning got off kind of late. We managed to take in other sights and about half of the Avenue of the Giants before we had to set out for the coast and Shelter Cove where we had reservations for the night.

The next day we backtracked and covered more of the "Avenue of the Giants" which we will touch on next week.

Closing out trip with another tradition 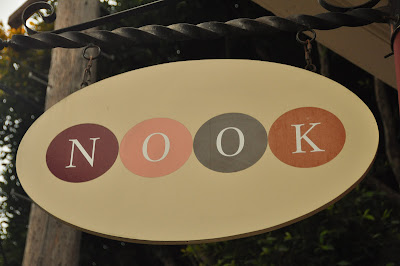 On the last day of our nine-day odyssey to the West Coast, we decided to try and fulfill a tradition (one of many which we try to accomplish each time we visit San Francisco).

And that was to visit a coffee shop on the corner of Hyde and Jackson streets -- The Nook. 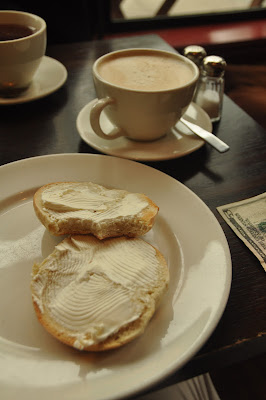 We discovered the spot a number of years earlier when we had accommodations across the street.

It was the third coffee shop we visited on our trip and still remains a favorite. One of the other two was in Montara, which we had visited previously, and the third in Mendocino (there will be photos of those two later). 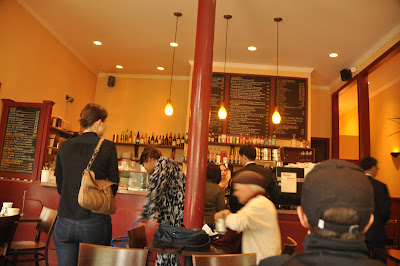 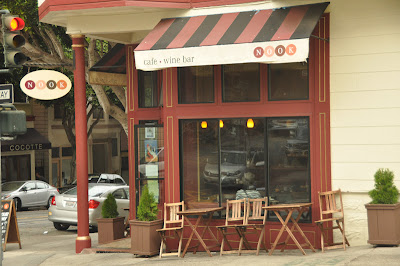 We left our Columbus Avenue location and moseyed over toward Hyde on our trip to the airport.

The stop depended on whether or not we could find a parking spot. Luckily, I managed to squeeze into the only spot available near the eatery.

The coffee, tea and bagels were great. It is nice to be served a drink in a "real" cup rather than the paper ones, although they were available for carryout. 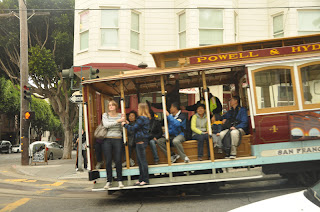 A couple of cable cars made their way around the corner from Jackson Street heading to Fisherman's Wharf while we imbibed.

It was a good way to start the day and end our trip. Both wifey and I were happy to finally be headed home although, as she well knows, I do have a love affair with the geographical area that is called California.

Wifey and I are into our hectic nine-day vacation to the West Coast and tonight, Tuesday, we experienced  a beautiful sunset from the third floor of the Tides Inn in Shelter Cove, CA.

Of course, there was a cool, if not cold, wind blowing off the Pacific Ocean that was almost as chilling as the drive to the Cove from Highway 101.

I have done a lot of mountain driving in the Smoky's in the east, and this was just as much fun. For about 23 miles, it was up and down and  around and round, hills and curves and more hills and curves.

We arrived in San Francisco early Saturday via United Airlines. The wait for a rental car seemed rather horrendous as the line was extremely long.

Finally we were out the door, picked up a "transporter" in Burlingame and headed across the bridge and up Interstate 80 headed for Yreka for the first night. (Note: a transporter is similar to a wheelchair but not as bulky. It is easy to maneuver. My wife suffered a stroke last year and although ambulatory, we felt that in some instances, it would be more feasibly for me to push her than let her walk long distances at a slower pace.)

It was a long day. We got up at 3 a.m. Mississippi time and got into Yreka sometime around 9 p.m. California time.That was about an 18-hour day. We were bushed.

The traffic through Oakland was pretty heavy but started thinning out once we got north of the town. We took the I-505 route and then hit I-5.  We kept the pedal to the metal and made good time.

Through the first four days we stopped in Yreka, made a scenic byways drive in Oregon, spent the night in a bed and breakfast in Coos Bay and overnighted in Eureka.

We'll pass on additional information over the next few weeks of what we did and also include some pictures.

Tuesday in the first night we got in early to our accommodations and we really are enjoying the downtime, other than having to make a post on the blog.

Posted by walter at 9:42 PM No comments: 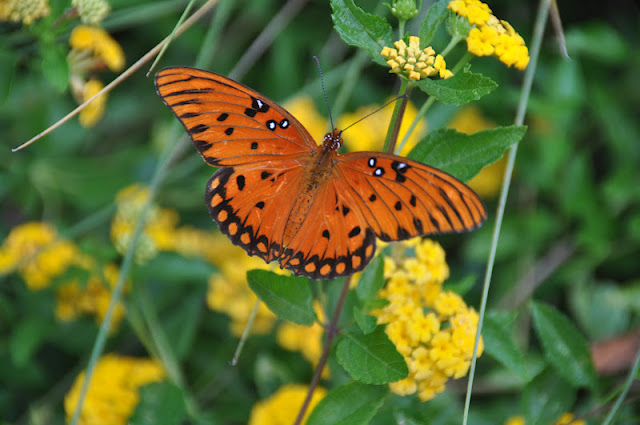 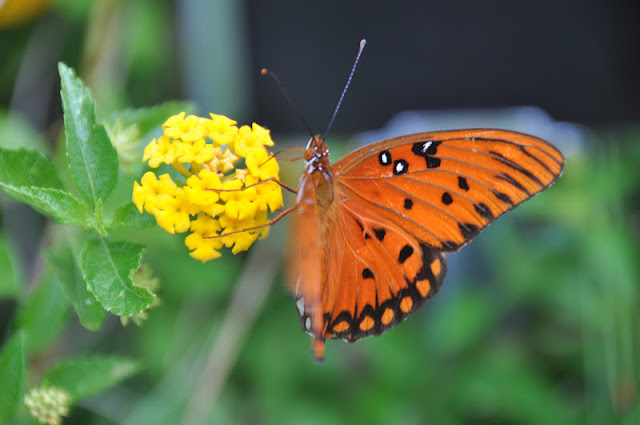 Butterflies were the reason wifey and I took a jaunt to the east  last Saturday. 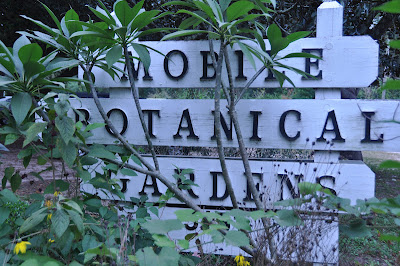 The Mobile Botanical Gardens was hosting a program "Butterflies of Alabama, Glimpses into Their Lives." 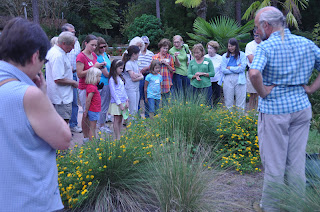 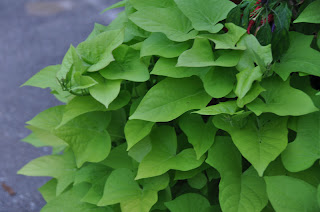 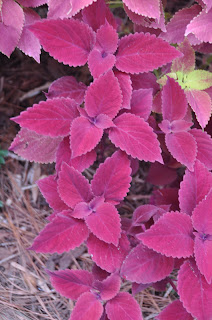 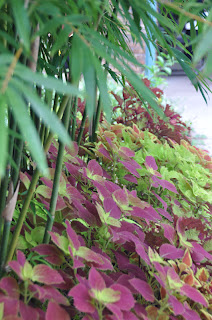 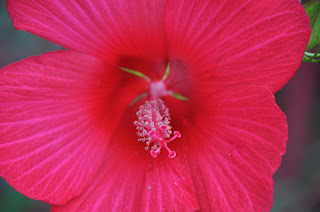 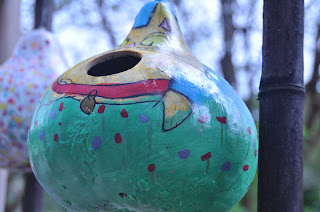 Guest speakers were the author of the book (Paulette Ogard) and photographer (Sara Bright).

About 100 or so people of all natures were in attendance for the two-hour presentation that involved a talk about how the book came about, a slide show featuring butterflies and a short nature walk. 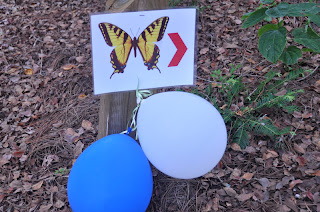 The butterfly book was on sale as well as butterfly-attracting herb plants and gourds decorated by area school children.

We left for the program (a 50-something mile trip) in a downpour. On the way, the skies cleared somewhat and allowed for us to attend the program and traipse into the woods.

We cut our walk short and headed back to our vehicle as storm clouds began gathering once again. When we were about a block from the gardens, the skies yielded up another torrential downpour. 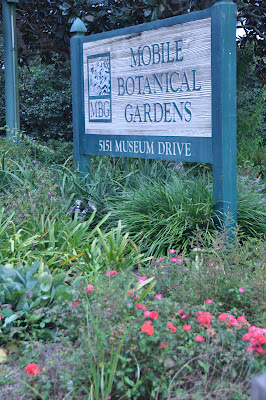