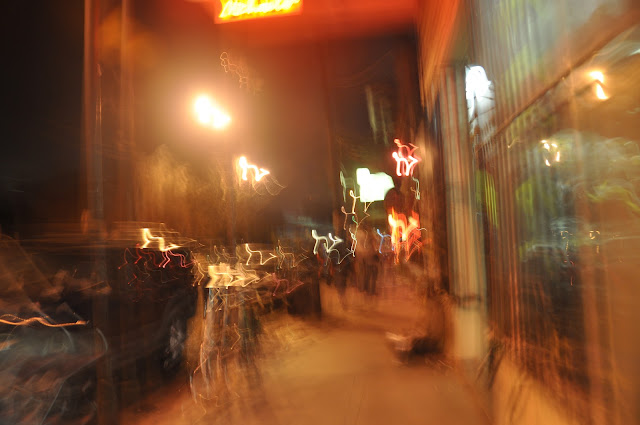 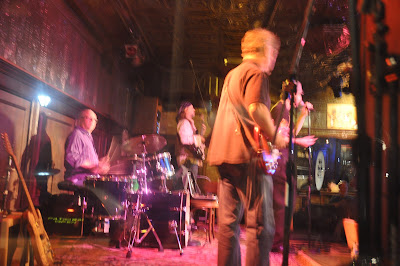 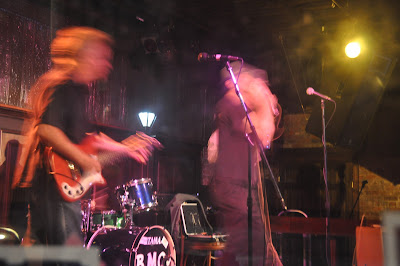 When planning on taking nighttime photos, it always helps to have a tripod.
Sometimes I am out at night on a trip and don't want to carry one. But after I try to shoot some nighttime shots, and they come up blurry because I can't hold the camera still, I wish I had used a tripod.
But for those who consider themselves to be artistic photographers, we can try to pass off shots that aren't really that good as "art."
Such was the case recently on our second trip to New Orleans within one week. We had taken in Mardi Gras parades on St. Charles Avenue on Sunday and went home that night.
The next Thursday we decided on an overnight trip to the Big Easy.

My, how things change. Our favorite hostelry wasn't offering any cut-rate prices on rooms and we had to pay to park. (After all it was the few days following Mardi Gras.)
We tried to justify it. That's the way life is. 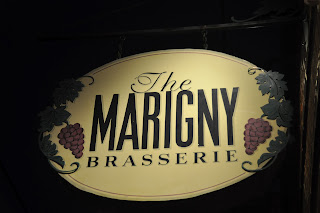 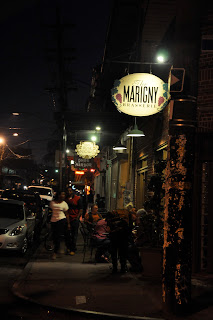 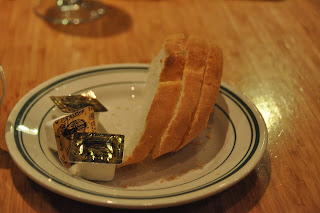 Wifey and I revisited the Marigny Brasserie on Frenchmen Street in New Orleans. It was about a six or seven block saunter. I say saunter, but it was deliberate steps, or an attempt at that, when one has suffered a stoke which my wife did almost a year ago.

The sun was going down, therefore I took along a flashlight to help in the more darkened areas of the sidewalks. We managed the roundtrip without any major issues, except I had taken off my lens cover at the eatery and had to return later to retrieve it. 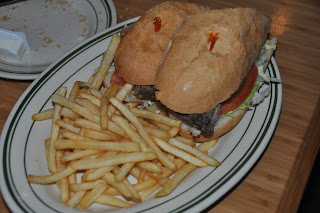 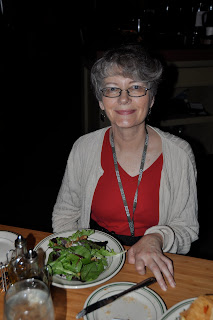 The brasserie has a lot of eating options, but we took the easy way out. They were out of buns, so I took a hamburger on French bread. I also had French fries and coffee, which I considered to be very good.
Wifey opted for a salad. Most of the time she just drinks water.
On the way back we cut off of Frenchmen Street and headed west on Decatur which runs by the Cafe du Monde, another of our favorite haunts which offers beignets and cafe au lait  along with chocolate milk.
After getting wifey settled in at the hotel, I headed back to retrieve my camera equipment.


I decided to take a little time and shoot some pictures through the windows of a few juke joints that were offering live entertainment. 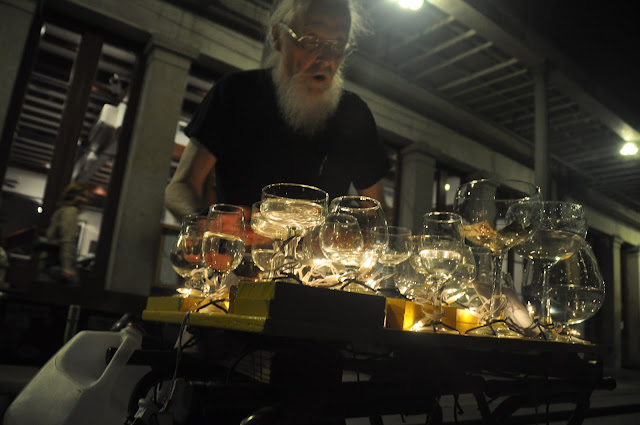 I also headed down to Jackson Square to see what was happening. There were a few entertainers including a street musician who made music by rubbing his finger via a circular motion on the tops of a varity of different glasses that had varying amounts of water in them.
I guess he makes a circuit throughout the country, since I saw him passing this way a few years ago.
I was able to hold steady for a number of shots and then the others that you see, well they're just "artistic."
Next post: March 6, 2012
Posted by walter at 8:54 PM No comments:

Mardi Gras (Fat Tuesday) has come and gone for another year. It is the day (the celebration usually ends up being about three weeks long)  to celebrate before the Catholic tradition of sacrificing and fasting during the 40 days of Lent. 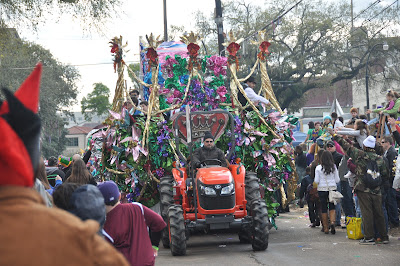 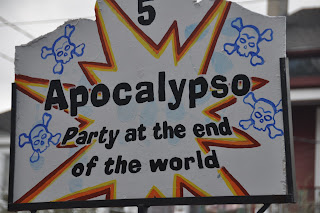 Thousands of people have witnessed the parades throughout the Gulf Coast South and caught or been hit by numerous flying objects including necklaces, spears and moon pies.
The Sunday before Mardi Gras, my wife and I joined our two sons, their families and thousands of others on St. Charles Avenue in New Orleans to witness a portion of the annual party. 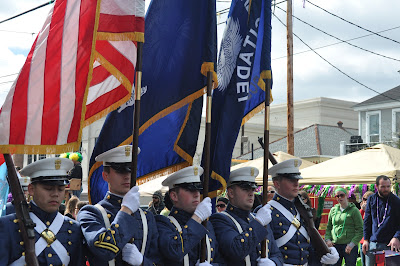 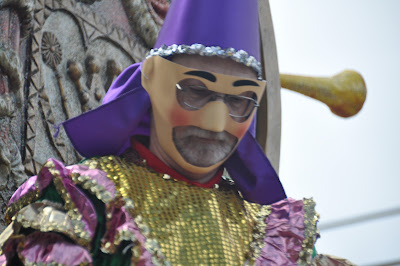 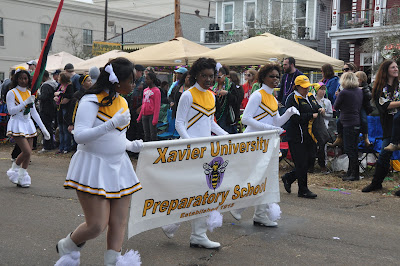 We went away with numerous necklaces, a spear and a few stuffed toys -  not to mention tired, achy bodies for standing all day long with arms outstretched joining others shouting "throw me something, mister."
Typically there are about three parades down St. Charles on this Sunday, but because of bad weather on Saturday, two were delayed and ran the route on Sunday. 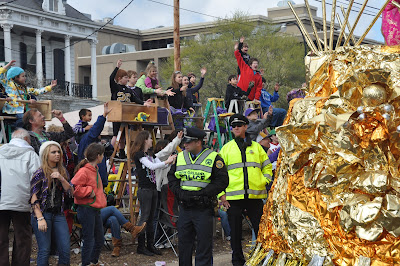 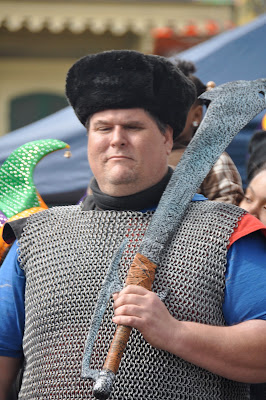 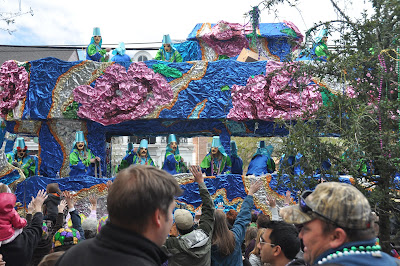 Parades moved through the area from around 9 a.m. until the last one which started around 5 p.m. We didn't see the first two and decided to head home around 4 p.m. missing the last one of the day.
Our home is about two hours east of New Orleans when the traffic's not bad. Going into the Big Easy, we were making extremely good time until getting into the city proper when we hit a backup on all three lanes of Interstate 10.
It was stop and go traffic for about 50 minutes before we exited the interstate and got onto Claiborne.
We missed the turn to get to where our family was and took a tour of a different part of the city before realizing our mistake.
None-the-less, we managed to find a $10 parking spot just a couple of blocks off St. Charles and went off to enjoy the day.
Revelers were almost shoulder to shoulder along the route while others had put up canopies and brought along their chairs and coolers and were settled in for an enjoyable day.
Sunday's weather was great. It was sunny, a cool wind was blowing and everyone seemed to be having an enjoyable time.
"Let the good times roll."
Next post: Feb. 28, 2012
Posted by walter at 9:16 PM No comments:

No way around using petroleum

It's a fact of life.
We need petroleum.
Well, we really don't need it. But that's only if we don't want to live the lifestyle we've enjoyed over the past 100 years or so.
Oil is intertwined into everything we see, touch or eat.
The price of gasoline is rotating back into the news.  Forecasts call for, maybe $5 a gallon, by summer.
Down here in the Magnolia State it is already up to $3.48 (that's the low end gas) and seemingly climbing up a few pennies every other day.
The last time we saw gas over $4 was back in 2008. That was the year my wife decided to retire.
I had previously told her when she retired we were going to take a 30-day road trip as far as San Francisco. That's some 3,000 miles one way.  And the decision was made before gas prices began climbing.
By the time we took off on the last day of May, gas was above $3 a gallon.  I decided that I would budget for $4 a gallon. Little did I know it would get that high, and beyond. We were going to California and they always have gas at a higher price.
We were in about the beginning of the second week of travel when we hit the $4 mark. Actually it was way above $4 in Tonopah, NV. -- $5 plus.
We didn't let it bother us -- too much. Maybe the $5 plus we paid would end up being the highest. After all, it was in the middle of nowhere and surely as we got closer to more populated places, the price would come down.
I just wanted to top off the tank and got about 5 gallons. Our tank holds 32 gallons so that would take up to the Pacific Coast, about 300 miles away. Maybe things would be better.
Prices did get better, but not by much.
Planning a one-month trip and the costs involved, even if above what was anticipated, can be handled. We just decided to spend the money.
The Tonopah price was the highest, and California was next.
After we returned home, the prices continued to come down over the summer and got really low -- like about $2  a gallon.
That was good.
But what if prices get up to $5 and stay there.
We'll just have to cut in other places -- and hit the road again.
After all, we like to travel. Check back in about six months and see just how much we decided to bite the bullet and pay the price.
Next post: Feb. 21, 2012
Posted by walter at 12:54 PM No comments:

Trans-Atlantic to Northern Europe -- not


Every now and then -- usually in the beginning of the year, I try to map out trips for the upcoming year.
Back in January, I talked to wifey about the fact that I didn't think I would like to take a trans-Atlantic cruise to Europe.
She said she wasn't interested either.  We had just  been through the news cycle for umpteen times concerning the ship in Italy that had problems where there were a number of deaths.
They compared that ship's troubles with the Titanic. It wasn't quite the same. The Titanic completely went underwater. The ship in Italy didn't.
The Titanic was out in the ocean. This other ship was near land. It had to be -- that's what it hit.
The news media also showed pictures of other ships that had trouble including the one hit by a rouge wave.
That did it for me. No ocean crossings.
But then I got that email offer from Norwegian concerning the repositioning of the Sun from Florida. I had wanted to take the Northern Europe cruise which included going on land in Holland, Sweden, Norway, Germany, the Soviet Union, Estonia and Finland.
And for just $1,966 each (for an inside room) I could get on their ship in Florida, cross the ocean, hit Portugal and then the other ports.
It would make eight new countries on which to set foot.
Then, there was the problem of getting back to the US. A roundtrip airfare ticket from Copenhagen was just under $1,000 each. Checking another site, I could get the roundtrip and a night's hotel for under $900 each.
I guess if I checked a little more I could find an even better deal. And then again there are a lot of logistics involved.
Maybe we would end up using the other half of the ticket, and then again, maybe just file it away.
The thought of a 22-day cruise is interesting. There would be six days at sea from Port Canaveral to Portugal, then three to Holland and another to Denmark.
I think I can deal with that. But what about my wifey?
Well, on that note I guess I'll just have to play it safe and plan another trip to the Smokies.
Next post: Feb.14, 2012
Posted by walter at 9:20 PM No comments: