It is hard to throw memories away

I had occasion twice this week to think about a place my wife and I visited some 31 years ago.

And that was the Nabatean enclave of Petra located in the country of Jordan in the Middle East.

The first time we were at an electronics store looking for an item. The store always runs these beautiful pictures of scenic and historic places in the world on their large TVs, and one of them happened to be Petra.

The second occasion was back at our new home when I was cleaning out some old travel material.

We’re trying to eliminate items because we have downsized.

And its hard to get rid of items linked to good memories. I still had a folder full of material on our trip that took us to Jordan, Israel and Egypt.

We traveled to the Holy Land in 1985.It was the coldest weather in the Southeast in years with temperatures in our part of the woods staying below freezing for a week or so. But we missed most of that because of the trip.

It was Mississippi to Atlanta to catch the KLM airline which stopped in Amsterdam where we changed planes and then it was on to Amman, Jordan to begin our just-after-Christmas excursion.

We arrived in Jordan late in the afternoon as the sun was going down.  Before leaving the airport we heard the call to prayer that is traditional in that area of the world.

Visiting a foreign country is great. The sights, the sounds, the traditions. Some lap it up. Others are so absorbed in their own world, they can’t appreciate people from other areas.

I tried to absorb as much as possible.

With just one full day in the Hashemite Kingdom, Petra was our main goal, although we experienced what we would consider a roadside market, some historical sites and then the horse ride into the wonder of wonders.

As I worked my way through my collection of information on the Middle East, I can remember my wife and I talking about the possibility of returning.

That never happened. And probably won’t.

But I remember those towering walls, the hewn out Treasury and the souvenir stand.

I guess I will keep those memories and my collection of papers just a little bit longer,

Maybe it will be Nashville this holiday season 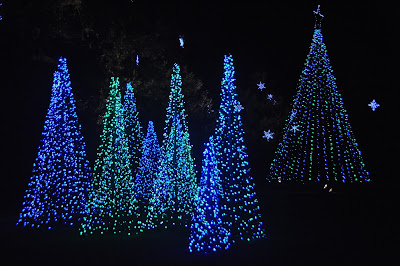 Summer is seemingly coming to a quick end.

It all went by so fast, even though we didn’t seem to do as much as in past years.

Whether it was “climate change” or just “getting older,” the heat kept me inside in the cool air conditioning more this year.

Or maybe it was  because we have moved into a new home and felt like getting ourselves wrapped up into enjoying it.

Years ago, summer was considered over when Labor Day came around. School usually started the next day.

Now, school for some starts around the first day of August. Other jurisdictions wait a few days later.

But summer doesn’t officially end until around Sept. 22nd or 23rd. That takes into consideration the time of the autumnal equinox which is the day that has equal amounts of daylight and darkness.

And after that, it is a quick run through autumn and the arrival of the  winter solstice just a few days before Christmas. That is the day with the longest nighttime hours.

Gosh, only August and we’re talking about Christmas for the second time.

Just the other day, my wife and I wondered what we would do as far as seeing new decorations and experiencing new events this year.

We decided to maybe try our luck at visiting a relative and on the way there or back, during the first week of December, enjoying the lights and sounds of Nashville, TN.

I’ve already gone to the Nashville area’s website that spells out what is going to be happening and it sounds pretty good.

Nashville has a Christmas parade on Dec. 3 which begins at 9:30 a.m.

Numerous other towns within an hour’s drive or so also have parades planned.

And then there is the Opryland Christmas holiday event that will light up the night from Nov. 20th to Jan 2.

All in all, with our really early look into what’s going on, it seems that this will be another great holiday season.

Posted by walter at 8:59 PM No comments:

Marietta's "The Local" draws us back in 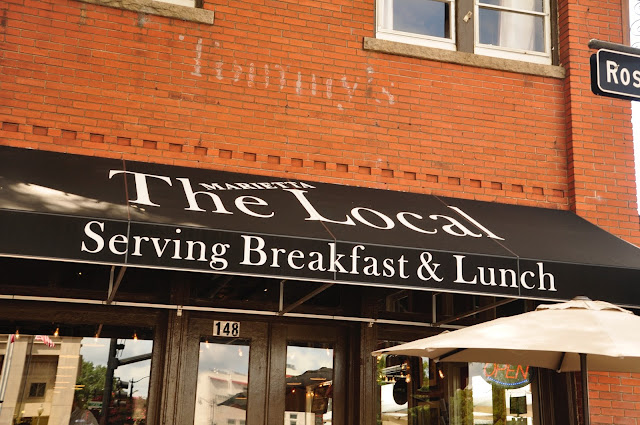 What a difference four days makes!

On Sunday, Aug. 7, my wife and I bowed out of continuing on our quest to eat in a downtown Marietta, GA restaurant.

Why? It was rather hot.

Last week I wrote that we would be making another attempt later in the week.

And it was a good choice. 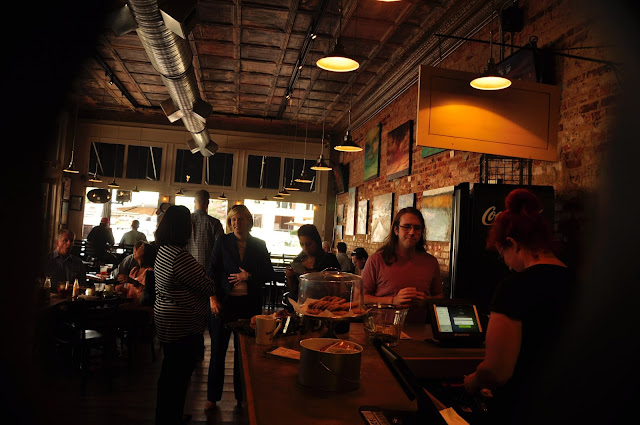 On Sunday, the weather website said that the heat index was at 97 degrees around midday. At the time, there didn’t seem to be any wind blowing and the heat was just beating down on us.

On Thursday, the heat index was a more bearable 84.6 degrees with a nice wind blowing.

Heading back downtown on Thursday morning, we were still thinking of going to a previously suggested restaurant to eat. 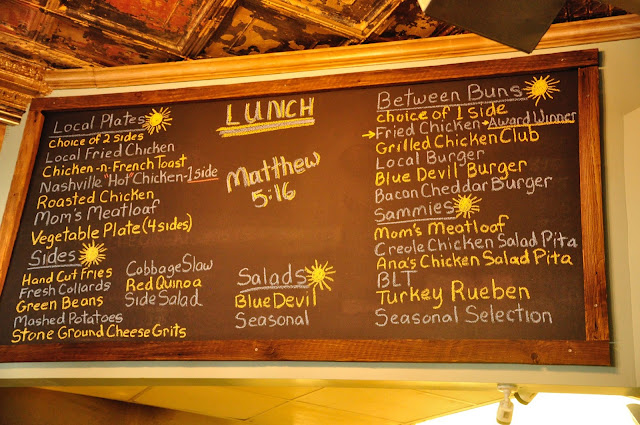 But, my, how we like to go back to old places.

And that’s what we did.

We revisited the Marietta Local which serves breakfast and lunch. It is located on the southeast corner of the downtown square and is located at 148 Rowell St. It is closed on Sundays. 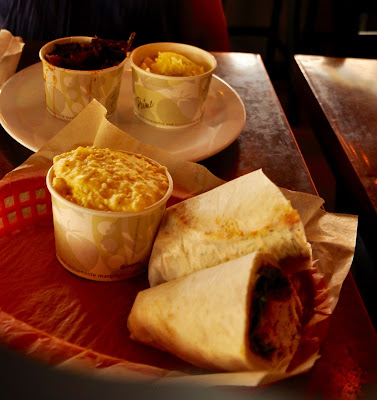 Arriving just before 11 a.m. we decided to wait a few minutes and order something off the luncheon menu. They quit serving breakfast at 11 a.m.

I opted for a Creole chicken salad pita with a side of stone ground cheese grits. Boy, was it good and filling.

My wife chose collard greens and skin on mashed potatoes.  My wife is an old fashioned country girl and likes to try “greens” whenever she can. (I don’t like them and hate the smell when cooking, so I never fix any at home.) 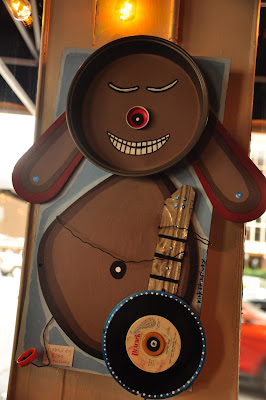 She enjoyed the potatoes but found that most restaurants doctor the greens up so much that they really don’t have that country taste that mom provided for her when she was growing up.

All in all, we enjoyed the visit and look forward to our next Marietta outing.

My wife will readily admit to the fact that as the temperature goes up, my interest in most everything declines.

And that also goes for going out to eat.

On a recent out of town trip, we goofed up.

“We made a mistake,” I told my wife as we crossed the street that goes around the downtown square in Marietta, GA.

It was this past Sunday and we had parked in a handicapped spot on the east side of the square.

We had wanted to get out and try a new place and were looking forward to the adventure.

But we really knew better.

The midday sun began to heat up my body and the sweat quickly manifested itself. But we were still game if we could quickly find a place out of the heat.

We had walked a quarter of the way around the square and stopped to ask a local couple if they could recommend a nice, rather inexpensive
eating place.

They did. It was on the outside of the south side of the square and we headed over to it.

They were crowded. It was the summer. It was a Sunday. And people were out for a good time.

The restaurant person took our name, and then said “that will be a 45-minute wait.”

We said OK. But upon standing in the waiting area at the front of the restaurant, we discovered that was not even cool, what with the door opening periodically which let the outside air invade our space.

There was an empty handicapped parking spot just outside.

I told my wife I was going to get our vehicle and if the spot was open when I arrived back, I would park there, and she could come out and we would leave.

If the spot wasn’t open, I was going to pull off the main drag into a side street and she would get in our vehicle there.

The handicapped spot was open, she came out and got in.

What did we do?

We realized that no matter where we went, we would still have to deal with the heat and I didn’t feel like spending a lot of money on an experience that we weren’t going to enjoy.

So we headed back to our son’s house and had hot dogs that were left over from the previous day.

The ‘dogs’ were great. The house was cool. And we didn’t have to spend any  more money for an outing that was turning into an unpleasant event.

We’re going to head out Thursday mid-morning before the heat sets in and try again.

Hopefully it won't be as hot, the crowd won't be as big, and we'll have a really nice time.

Posted by walter at 8:21 PM No comments:

This time last year, our family had just finished up what we could call our "regular" annual camping trip to the Great Smoky Mountains National Park.

As one could see in the picture above, there was a lot of our family there — sons and daughters-in-law, grandkids and my brother and sister and spouses and a grandchild.

This year is considered the “off” year. One of our sons just goes to the mountains every other year and the other has found that when that happens they like to go in September when their kids are out of school.

This is that year.

By going on line early, we were able to get the same camp sites as last time. They are adjacent and on the river, which we like.

Unlike the middle of summer trips, the “grands” don’t go in the river that much because of the cooler weather.

But the cooler weather is one of the reasons for the change to September. And they manage to get in a couple hiking outings.

My wife and I like to go to the mountains anytime, but the fall of the year seems to invigorate us more.

Plans are to be in Element Campground the last week of September.