"Life is what happens while you are making plans."
I believe this was written on the side of a building in the movie "Cuffs." I haven't taken the time to go look at the movie during the past week in order to be sure.
But I just wanted to use that saying anyway. 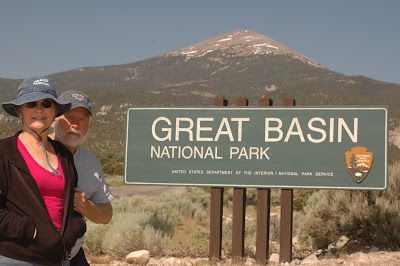 Last week while Linda, my wife of almost 44 years and I were making plans, life happened. She suffered a stoke and has been in the hospital ever since.  She is improving and will be going to a rehabilitation facility today or tomorrow.
We expect a complete recovery and a return to normalcy which means more travel.
During the course of our almost 44 years together, we just didn't make plans for when we were retired and could travel.
We have been on the go all those years. First to Jordan, Israel, Egypt. And later to France and Italy. We have taken a couple cruises and in the early years of marriage took a year off from work and van-camped throughout the US. 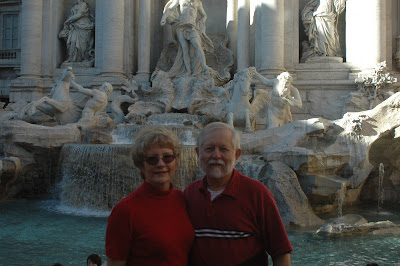 The Smoky Mountains have been an annual destination. And lately we have been making it up that way two or three times a year.
San Francisco is another favorite spot. We have made the trip from Ocean Springs to the West Coast at least 20 times over the past 40 years.
Needless to say, I like to travel and wifey goes along.
And since this is going to be a short post, I want to emphasize, don't just make plans to do things or to travel. Make it happen - today. Put aside the money, live a few dreams while you can.
Life may happen tomorrow.
Next post: May 3, 2011
Posted by walter at 12:03 PM No comments:

A meal and a memory

I don't remember much about the Red Hot.
But I do remember the fact that my wife and I frequented the truck stop often back in the late 1960s when we lived in Aberdeen in northern Mississippi.
The Red Hot was located in Meridian.  It was a "half-way" point in the early days of our marriage when we traveled a lot between Aberdeen and her hometown of Hattiesburg.
Meridian was about an hour and a half drive northeast of Hattiesburg on US 11 and Interstate  59. Aberdeen was about another two hours farther north on US 45.
So coming or going, depending on the time of day, the sign welcomed us along with thousands of others.
The place was always busy, catering to truckers from all across the South heading to or from Atlanta, Birmingham, New Orleans or Jackson, MS or points farther east and west.
I ordered the t-bone steak special which I enjoyed. Don't remember the sides but it had to be a baked potato and some peas along with a roll and some coffee. Those were the most common accoutrements in the South.
Just this past year, upon returning from a trip to the Great Smoky Mountains National Park, we happened to go through Meridian.
And this time we decided to stop and shoot a picture of the iconic sign that still lingers along the side of the highway. The truck stop was torn down more than a decade ago so the land could be available for another larger business.
Looking for the Red Hot on the internet  brought up some interesting items  concerning paleontologists who have been digging in the area of the sign and finding interesting tidbits of the past. Others recall their "best" ever cup of coffee.
Maybe the sign will continue to stand tall, and not become buried like the relics that are being uncovered.
It is unfortunate that once-popular places such as the Red Hot are relegated to just memories.
I guess it is just a sign of the times.
Next post: April 26, 2011
Posted by walter at 9:56 PM No comments:

When does one become antsy about a summer road trip in light of the fact that the price of gas is expected to hit $5 a gallon sometime in the next few months in the United States. We've got about $1.30 more to go down here in south Mississippi where we live before it hits that mark. But it is heading there.
And our vehicle, a 2000 Chevy long-wheel-based, high-rise van gets from 16 to 20 miles per gallon depending on our speed on the Interstate.
It also holds 33 gallons. That means a fillup would be north of $150. We usually can get more than 500 miles on a tank of gas and it takes about three tanks to get to the mountains, do a little riding around up there, and then make it back home.
Sounds like a lot. But wait. When planning a vacation, one needs to take everything into consideration and just balance it out and rationalize the cost of enjoyment.
We're going camping in the Great Smoky Mountains in late June and will be camping at Elkmont about six miles from Gatlinburg. If the government doesn't shut down, the park will remain open and campsites go for around $20 a night.
But for those who have a Golden Age Passport, the price is cut in half. A week's camping costs $70. We were going to eat anyway, so that shouldn't be considered in.
Except we'll have a couple grandkids for a few days extra and have to feed them. But its not that much. They almost live on Kraft macaroni and cheese. But they like pancakes, sausage and eggs along with orange juice.
Lunch is sandwiches and supper ends up being hotdogs or hamburgers along with some side dishes. They also like Smores.
We try to stay in the park most of the time which means, hiking doesn't cost extra. Enjoying the wildlife and nature doesn't cost extra. Visiting historical sites doesn't cost extra. And the waterfalls are beautiful.
We'll pick up a souvenir or two at the National Park Service visitors centers, but then again, we belong to the Great Smoky Mountain Association and get a discount on purchases.
Tubing in the river isn't extra since we have had the tubes for a couple of years. The grandkids enjoy playing in the river which also includes throwing rocks.
For those who want to take rationalization to the extreme, add up the savings back home because the electricity is not being used, the water isn't running and there's no gas waterheater operating. Sure makes a trip sound more affordable.
So a week can cost as little as $700. That's just $100 a day (for two adults and two children), which most people, when traveling, consider to be a good deal. Oh, I forgot. We usually go into Townsend for ice cream which can cost about $2 each.
Don't give up on summer travel plans. Just rationalize !!!
Next post: April 19, 2011
Posted by walter at 11:35 AM No comments:


While in a parking lot of a grocery store in Ely, Nev., almost two years ago, a local resident walked by while we were loading groceries into our long-wheeled base, high-rise Chevy van.
She didn't stop to talk.
All I heard her say was (in referring to our van): "That's the only way to go."
Of course, for the past 40 something years, a van, for us, has (almost) been the only way to go.
The maroon van we had on that trip is still with us. At 11 years old, it is still running good. And I would make that 6,000-plus mile trip again at the drop of a hat.
On our recent skiing trip to Boone, NC, the odometer hit the 200,000-mile mark while we were going through Atlanta.
This wasn't the first van we owned that hit that mark. We purchased a 1985 GMC van in early 1986. We kept that van for 22 years and traveled far and wide with it, although it never made it into California. Las Vegas was the farthest.
Our first van was a 1971 long-wheel base Chevy.
Our first jaunt in it (1973) was a three-week excursion covering some 7,000 miles that took us as far west as Spokane, WA and then down into California and back.
A few years later, in 1977, we took a year off to travel around the US. Our five-year-old was with us and upon leaving our home in Ocean Springs, that vehicle took us all the way up to Canada and over to Maine and then back home for a short stay.
Then it was three months out west traveling along the southern border and into California and all the way to San Francisco. The third part of that trip took us to the Badlands in the middle of the summer.
We went insane shortly after returning, thinking we needed a four-cylinder vehicle to help save on fuel costs. It wasn't the same.
We added a Chevy Astro van to compliment the other vehicle and eventually got rid of both.
And old blue Chevy was another addition in which we traveled a lot. A trip to California had us stopping too often to check the oil and refill.
Vans are so convenient. In the early days (before all the safety regulations) our kids played in the back of them while we were headed down the road. They have a lot of space, and upon building a bed in them and adding a porta-potti and Coleman stove, they become recreational vehicles.
Vans provide good cover when sleeping somewhere out on the road, and cooking in them and picnicking can't be beat.
OK! Yes, they are more expensive when it comes to fuel. Our current vehicle is an 8-cylinder. The previous one was too. But, hey, when you can sometimes sleep in inexpensive or fee locations (like Walmart), it works out to be a good deal.
I cried when we got rid of our first van which was like a family member, having been with us for two trips of a lifetime all over the United States.
I've matured since then, but I still have strong feelings for vehicles that have served us well.
And our vans have done just that.
All I have say about when it is time to travel is a trite play on words about our vehicles and a noted artist -- "Van-go."
Next post: Tuesday, April 12, 2011
Posted by walter at 10:18 AM No comments: