It can't really be that far away

My wife can tell you that for years and years, California was one of the two places that I liked visiting the most.

My, how things have changed.

Age has got a hold on me and I am no longer singing, or humming, “California Dreaming,” the song made famous by the Mammas and the Pappas.

I don’t listen to Tony Bennett’s “I Left My Heart in San Francisco” that much any more.

California just seems so far away now from my home on the Gulf Coast of Mississippi.

The late 1970’s and the 1980’s were so enjoyable visiting there, what with experiencing new places and the really entertaining street artists down along Fisherman’s Wharf, Ghirardelli Square and the Cannery.

The cable cars were so exhilirating. There was one time, I believe it was on a full moon night, that when going “so fast,”  — what eight miles per hour— down Hyde Street past Lombard, it seemed like that moving part of history seemed to have gone airborne after just crossing an intersection.

Those were the days: Long walks, city history, mild days and cool, if not downright cold, foggy nights. I just loved it.

And in a way, I guess, when I think about it, I still love the area.

Chinatown, Union Square, the panoramic views of the Pacific from Louis’ Restaurant and of course the Golden Gate Bridge. They are ingrained in my memory. 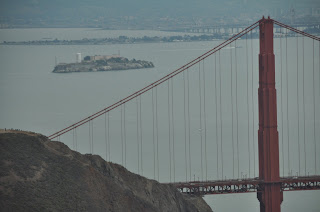 And it is disheartening to hear about the weather problems plaguing the area, first with drought and then with the heavy wind and rain the area is now experiencing.

One day, things will get back to normal, whatever that might be, and perhaps then, I’ll just look West once again and think, well it’s not really that far.

Those were the days

I am using a trip in a couple of weeks to visit our son and his family in Georgia as a reason to reacquaint myself with some old stomping grounds.

Actually, it was  a place that seemed to do a lot of stomping on me.

My wife and I had tied the knot back in 1967, a year after I graduated from college in Hattiesburg, MS.

A Republican in a Democratic domain was owner of the weekly Examiner located in Aberdeen, on US 45 between Columbus and Tupelo.

I became the assistant editor of the paper that had been in operation since April 28, 1866. I just happened to have been born on April 28, but it was in a different century.

There was the editor and myself, who both did news and advertising. I liked photography, so I did most of it.

There was a bookkeeper and a receptionist, who did local items, plus the backshop.

Weekly newspapers can’t afford a lot of staff, so what was there did the work of two and sometimes three people.

After a year of that schedule, the editor sold the paper to two locals, a lawyer and funeral home director. My understanding was they didn’t want a local doctor buying out the paper.

The days seemed even longer and sometimes the nights seemed that way too. And after a year, I decided another calling would suit me.

Looking back, I am glad I changed my routine. What I was doing was about to kill me, or so I thought.

We’ve passed through the area about two times over the past 47 years, but hope this time to maybe do more than past through.

Perhaps we’ll spend a night and some time looking up old acquaintances, if they are still alive.

Posted by walter at 9:22 PM No comments:

Saying goodbye has its moments

Perhaps the biggest trip one can make is from one’s old house to a brand new one.

Even if it is only a mile away.

Last week my wife and I closed on the home that we had lived in for 45 years.

For some reason, we didn’t seem to be tied emotionally to it as much as we thought.

For all those years, it served as a good place to raise our two sons, was close to our church of 25 years and was within easy driving distance of our jobs.

The day before the closing, I went back for one last time to clean out a few more things and to take one last look. And as I write this, I am more emotionally involved than I thought.

That January day was clear and mild.  And as I stood in what we called the “Big Room,” which was part of the last addition to the house, the memories seemed to take a life of their own as the sun filtered in.

It was 45 years - almost a half of a century. There was the good, the bad and the ugly and more hurricanes than we wanted to experience.

But we survived and thrived. The two major additions to our house were nice, but the residence, to a degree, suffered.

Ocean Springs was not an area of which we were unfamiliar, being as I am a native of Biloxi, which is just across the bridge, and my wife is from Hattiesburg, 80 or so miles to the north.

We had envisioned living in other places in the US, but that never happened.

As much as we like to visit the mountains and the West Coast, we always returned to Ocean Springs.

Our new residence was designed for what we needed and what we wanted.

It takes into consideration the experiences of those places that we visited and allows us to enjoy what some call the “Golden Years” in a place that has a semblance of the mountains and the feeling off a vacation home.

What more could one ask for?

Posted by walter at 9:16 PM No comments: