As a follow up to last week's post (and also another), there's good news.
We have relocated one raccoon that was trapped in our back yard.
Another entered a trap last night, and this afternoon we will go relocate that one. I don't know if there are anymore, but we'll probably find out later today upon returning home. They do tend to make noises in the late afternoon and at night.
It's Tuesday, so we are at Coffee Fusion in Ocean Springs, MS. It is one of our favorite places to go to get out of the house. I'm having a large latte with skim milk and sugar-free vanilla flavoring. Linda is having her traditional Darjeeling tea.
Wife Linda, who suffered a stroke on Good Friday, is out of in-house rehabilitation at Singing River Hospital in Pascagoula and is now engaged in out-patient rehab in Ocean Springs.
We are continuing to try to do normal things, although Linda has a ways to go to get back to full strength. On Sunday we traveled to my mother's for  a Memorial Day celebration of boiled shrimp, potato salad and some sweet deserts. My brother and sister and their spouses were also there.
We've been to Wal-Mart, will go there again today and are planning to go to Lowe's later this morning and may stop off somewhere else if Linda is not feeling too tired.
But she's determined and working on it. Out-patient rehab is now at three days a week for at least through June. The other two week days, she's involved in at-home rehab doing exercises that have been recommended.
Back to the raccoons.
A school-bus driving buddy of mine said I could bring my catches to his house which is about four miles away.
He is apparently the neighborhood "raccoon man." When we took the raccoon in the trap toward his back yard (it was about 5 p.m.) 10 or 12 raccoons came running out of the woods looking for the food that he takes to them each day.
He has a trough he dumps the food into and they just line up side by side to partake of the goodies.
Upon releasing my catch, the critter darted into the underbrush as quick as he could.
That was OK by me.
On another note, we're looking forward to our early July camping trip to, where else, the Great Smoky Mountains National Park.
Next post: Tuesday, June 7, 2011
Posted by walter at 9:43 AM 3 comments:

I once thought raccoons were quite cute.
Over the course of our travels, we have come across some interesting situations.
Up at Acadia National Park in Maine, late one night, after we had decided to go to sleep (in our van), there was a little noise on our picnic table outside.
Quietly finding a flashlight, the wifey and son and I got ready and put a quick light toward the table to find three rather heafty critters looking over what we had left out. The light didn't scare them away. They just looked back at us, as if to say, "what?"
Another time, we were at a place called Cave Creek on the eastern border of Arizona. My wife says she recalls a raccoon there that had run into a little trouble, but none-the-less, didn't let it slow him down too much.
She said the critter was missing one of his paws. Apparently, it may have gotten cut off as he attempted to get into a garbage can. But she said she watched him as he worked his magic.
He used his good paw to open the top of a garbage can while managing to work some leftovers out onto the ground.
And then there was the time in Yosemite Valley.
With hundreds of people going to and fro, a raccoon acted like he was just one of the crowd as he made his way from one garbage can to the other in the business district, almost oblivious to the teeming mass of humanity around him.
Yes, they can be cute.
But that's not the way I am feeling just right now.
There is scampering overhead as I sit in the big room of our house.
The sound is in the attic. For a while it gets quiet, and then starts up again.
Those once-little-cute critters have invaded our residence.
Back and forth. To and fro. Noises here, noises there.
First the critter pulled shingles from my roof and gnawed a whole in it. Wifey gave me an indication of it, but I was thinking of something else.
Eventually I realized what had happened. And then it was too late.
I covered the hole in the roof with a light covering of shingles. That didn't stop it. I put a heavier covering of shingles. That didn't work either. I hammered a board and then covered it with heavy wire. That ended that entry point.
I assume, their having been trapped inside the attic, they had to find a way out and they pulled up some metal ventilation strips to get out.
I covered those holes up. They gnawed a larger hole to gain access.
I finally found someone with a trap, so I set out to capture the critter.
And after a week, I have decided there should be a newTV show, "Are you smarter than a raccoon?"
They are smarter than me. I didn't know all the nuances of what it takes to trap a raccoon and therefore I have been trying for a week to find it one morning still in the trap.
No such luckl
They like marshmallows and manage to get in the trap, abscond with their take and escape without triggering the mechanism.
They don't like oranges. One night they chose marshmallows and left apple slices.
I tried an adaptation inside the trap tonight, hoping that will work. We'll know in the morning.
All I can say is, I don't ever think I will consider them cute ever again.
Next post: May 31, 2011
Posted by walter at 9:29 PM No comments:

Sometimes a picture is worth, well, maybe a thousand words.  What about this one?
This animal is used in trail rides in the Great Smoky Mountains National Park in the area of Cades Cove, which is on the west side of the park. After a day of work, he's turned out to pasture and oftentimes, while hanging along the fence line, picks up a few treats from vacationers passing through the idyllic countryside.
Next post, May 24, 2011
Posted by walter at 11:43 PM No comments: 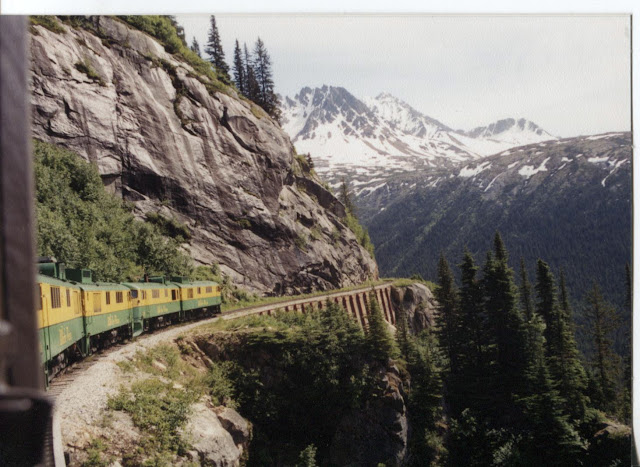 Spectacular! Awesome! On the edge!
Those are just a few words that can describe the narrow gauge journey from sea level at Skagway, Alaska to the White Pass at some 2,865 feet.
The trip has been taken by thousands, most recently by tourists who arrive on large cruise ships. Travelers can get a glimpse of what it was like for prospectors long ago who had to make their way over the pass on foot on their way to the Yukon seeking gold. 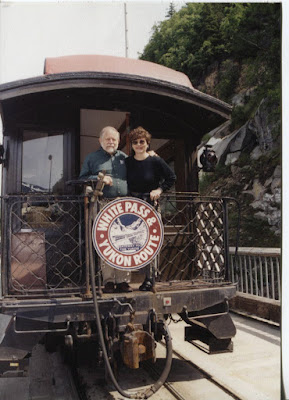 Skagway at one time (back in 1897) was the largest city in Alaska averaging a population of 20,000 people.
The White Pass and Yukon Route Railroad serves up a horse of a different color these days for those who want to make the journey to the pass which is a 20.4 mile one-way trip. 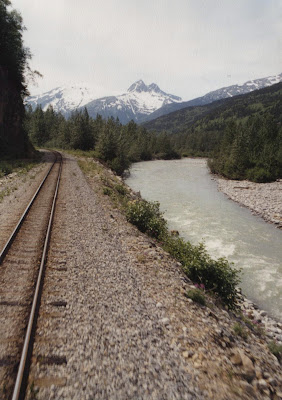 Plop down your cash, hop on one of their cars and you're off.
Memories still linger for my wife and I on a trip we took more than a decade ago.
The climb up to the pass was breathtaking, mainly because at times the train was running along the edge of steep cliffs or over seemingly rickety trestles. The sides of the mountain we were on were almost vertical. 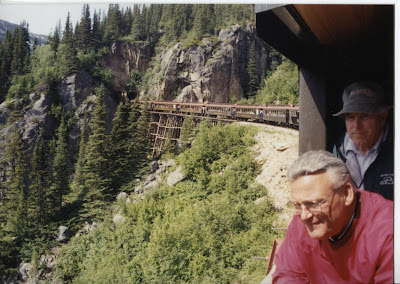 As we climbed up to the pass, vistas opened to the sea.
The main engines which pulled the cars we were on were diesel, a far cry from the early steam jobs. 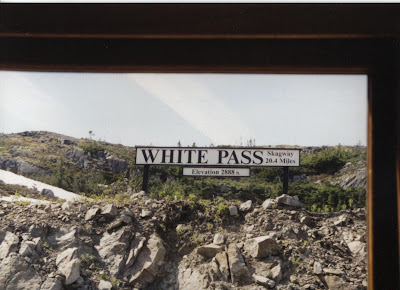 The railway closed down in 1982 when metal prices dropped and mines closed. But in 1988 it opened again catering to the tourist trade. (History of the railway)
Next post: May 17, 2011
Posted by walter at 8:30 PM No comments:

Enjoy things that annoy others

A traditional trip to a well-known place we have visited previously doesn't take much extra planning.
We know where we're going, the basic route, although sometimes there are sidetrips, and the costs  are usually known, within a few dollars.
When planning a trip overseas -- that's a horse of a different color.
My wife and I have planned and taken two such jaunts. One was a one-week stay in Paris. The other was a 10-day trip to Italy including stops in Rome, Florence and Venice.
Both were extremely enjoyable. The weather was great. The airline connections were good and  the accommodations were excellent. Did we luck up?
Maybe we did. But then maybe we look at things in a different perspective.
As the saying goes, "When in Rome . . . do as the Romans."
We can adapt, and some things that other people complain about, we just find interesting.
Looking at reviews on the Internet of what other people think of different accommodations gives one good insight.
But sometimes, we take those reviews, especially if they are not too favorable, with a grain of salt. One review indicated that the elevators in the hotels in Europe were small.
Golly, gee. A small elevator.
On our trip to Paris, we found the elevator in the hotel in which we were staying to be of a birdcage size. There was just enough room for my wife and I and our luggage.
We found it fascinating and interesting. Going up to the fifth floor and then going back down was always an adventure and enjoyable.
We had a small room in the Mercedes and the bathroom was in a triangle shape. Not to worry. We adapted. Our room overlooked Avenue Wagram.
There wasn't much room out on the balcony. But we made use of it spending a number of meals overlooking the activities on the street below including the skaters on their weekly Saturday night jaunt.
Sometimes, things just turn out better than expected. And become a pleasant surprise.
Next blog: May 10, 2011
Posted by walter at 9:20 AM No comments: