Due to circumstances, like lack of stamina, weak legs and knees and perhaps a weaker mind,  I haven't hiked the trail up to LeConte Lodge in the Great Smoky Mountains National Park in a long time.

Matter of fact, it has been bout 20 years since we have put ourselves to the test. Seven years ago, my wife suffered a stroke which keeps her off the trails.

The current test for me is seeing how I feel climbing two flights of stairs.

There is a little pain in the knees and legs and the mind says, "Your best days are in the rear view mirror. Forget about it."

But I do  admire those who can muster up the energy for such a task.

And I do admire those who operate the lodge atop the mountain.

During late spring, summer and early fall, hundreds, if not thousands, make the trek, with some spending the night.

The above picture, which I procured from the site www.highonleconte.com, shows a couple pack animals used this month to take supplies up the mountain. Helicopters are also used to supply the lodge.

I've never spent the night there, but have enjoyed snacks purchased on the top of Mount LeConte.

For those who like hiking mountains and the idea of spending the night atop one in a lodge, take a gander at their website on which someone posts about daily activities throughout the year.

Sweet Home Alabama does it up big 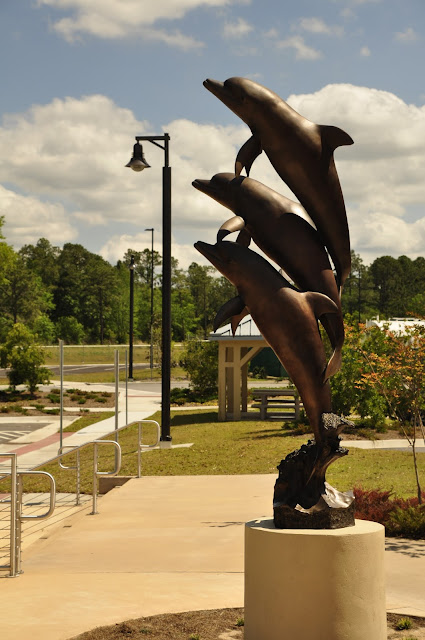 It is really “Sweet Home Alabama” at one of that state’s most recently finished replacement "Welcome Centers."  The facility is located along Interstate 10 near Grand Bay, AL just east of the Alabama-Mississippi state line.

The state just in the past couple of months completed what I thought was about an almost year-long project on the new building.

My wife and I pass the welcome center often when either going to visit relatives in Georgia or just enjoying a trip to the neighboring state. 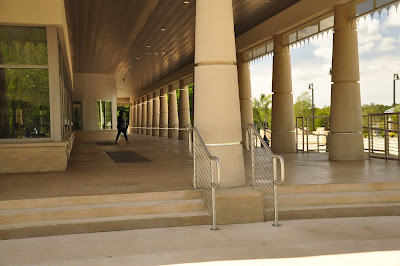 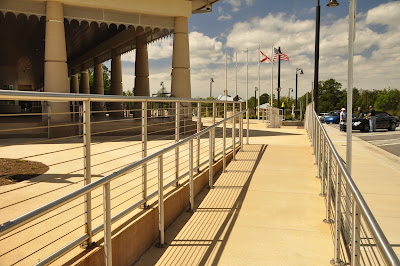 We have another relative that works at the center, but she was off the day last week when we passed through.

Watching the tearing down of the old facility, we didn’t know exactly what was planned for the new one which was situated farther off the interstate.

But the new digs were worth waiting for. We didn’t stop on our first chance since we were in a hurry and didn’t realize that it had opened up.

But we found that Alabama put  a lot of forethought into the building and decided to make it a multi-purpose facility when needed in that it is large enough to be used as a staging area when the need to respond to hurricanes occurs. 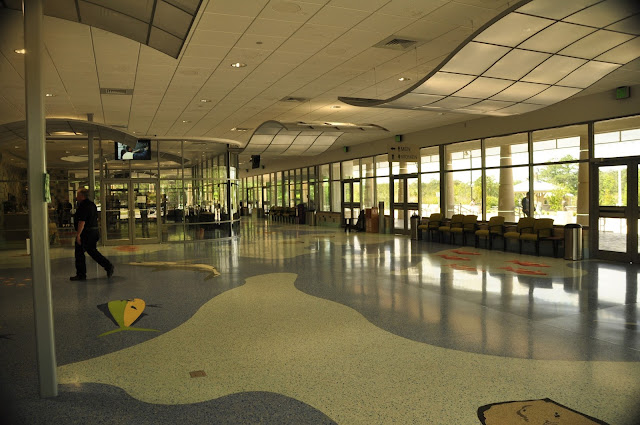 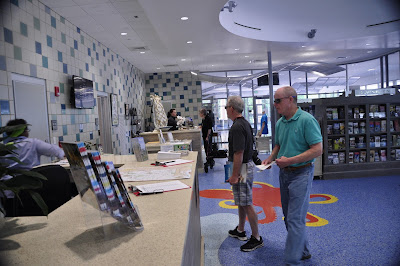 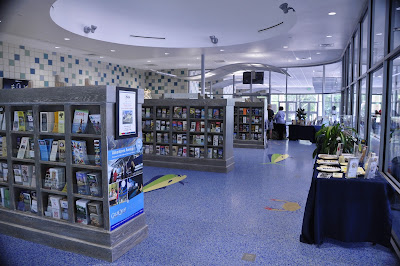 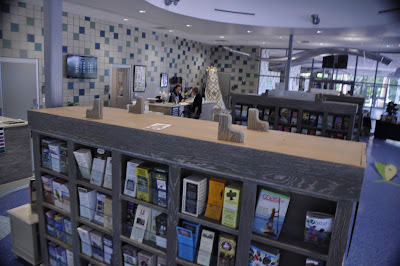 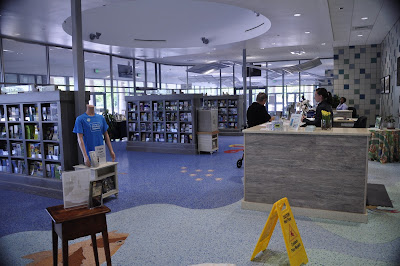 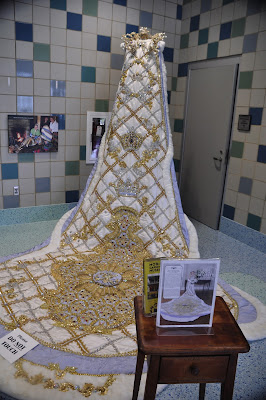 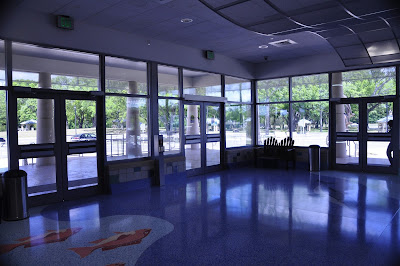 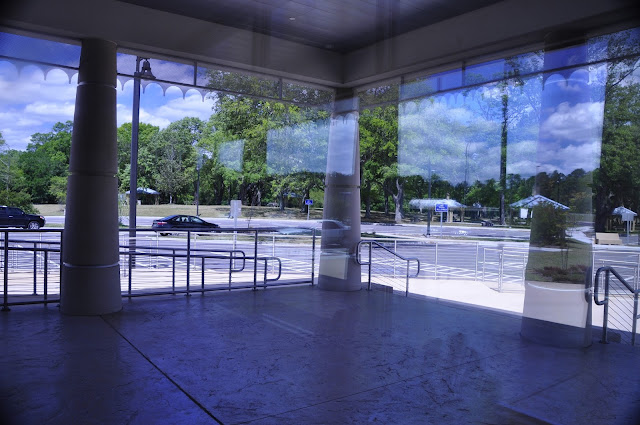 It is a huge facility with high ceilings and a light and airy feeling.

There are numerous displays in addition to the traditional tourist information. Picnic tables still dot the landscape and there are wide walkways, with an incline that allows for handicap visitors to easily maneuver into the area.

Its all new, clean and spotless. 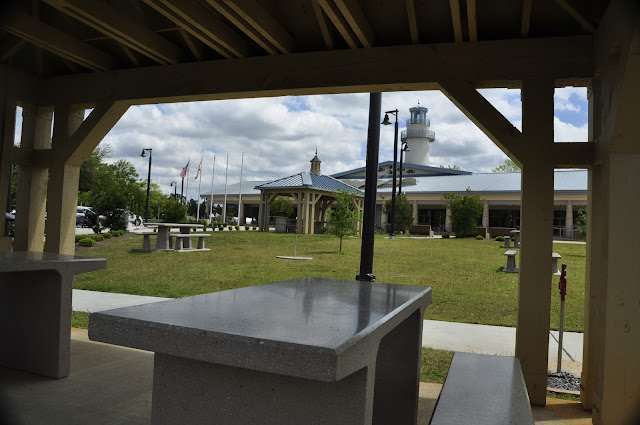 Posted by walter at 9:41 PM No comments: 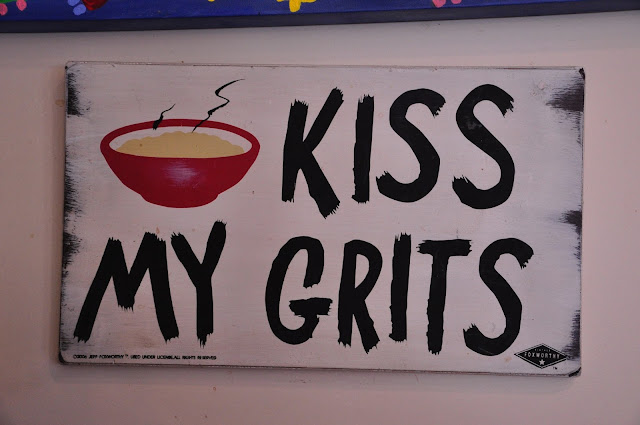 And it shouldn't really, but everyone wants to blame something for not doing what they should.

We were on a trip to New Orleans recently and stopped in at a new restaurant. I've already published a story and pictures about the place, but I was holding back the above sign for a time like this.

It is not really a sign of the times, it is a sign for all times, especially Down South, and said in a milder manner.

Grits are one of my favorite breakfast foods, usually accompanied by eggs, bacon, toast and coffee.

I guess someone way in the past didn't want to get too vulgar, but wanted people to know how they felt.

And "Kiss my Grits" has a nicer flavor than the other.

Atlanta I-85 fire fails to slow us down

Concerning flying anywhere, my contention is that the best time to do so is immediately following and incident concerning an airplane.

Why? Everyone at each carrier should be on heightened alert concerning their own craft and therefore paying more attention to detail as far as maintenance, safety and weather.

Based on that: What is the best time to drive through Atlanta?

How about the day after a major fire that causes part of the interstate to collapse and that part of the highway is closed down.

My wife and I were already planning a trip to Marietta, GA, just north of Atlanta, last weekend when we heard about the fire.

Some people have been arrested and charged with starting the fire under a section of the elevated Interstate 85 that resulted in a portion of the highway collapsing.

I know Thursday night and Friday morning was probably a mess in the city with people trying to find alternate ways to get to work and then get home.

Some schools closed. Some businesses told employees to stay home and try to tele-commute.

That was OK for them, but what about us.

Our options were to not take the trip, find another way around the city or roll the dice and travel the way we normally go.

Prior to heading toward Atlanta on Friday morning, I looked at maps and alternate routes.

We had done something like that before and ran into a lot of traffic and plenty of traffic lights.

I figured that the area around Atlanta was going to be crowded and it would take two, maybe three hours to do that.

We decided to roll the dice.

All I can say is that we made the trip through Atlanta faster than usual.

Traffic at the time, around 5-6 p.m., was rather light. I guess a lot of people got off early and headed home by the time we arrived.

The only bottleneck was when we arrived at the point where the two interstates separate north of downtown, near the location where the fire had been.

I-85 was blocked off both north and southbound. The slowdown was when the I-85 lines were blocked off and people had to merge into the I-75 lanes.

After a momentary delay, although still on the move, we resumed full speed ahead to Marietta. The I-75, I-285 bypass intersection north of town was not that bad.

Having such good luck, we decided to retrace our route on Sunday as we headed back home.

Traffic was at a brisk pace and there was no backup.

But then again that was the weekend.

I guess Monday morning, commuters faced chaos once again as Atlanta tried to get back to the “new” normal.

Posted by walter at 9:00 PM No comments: