The unexpected in a woodland walk 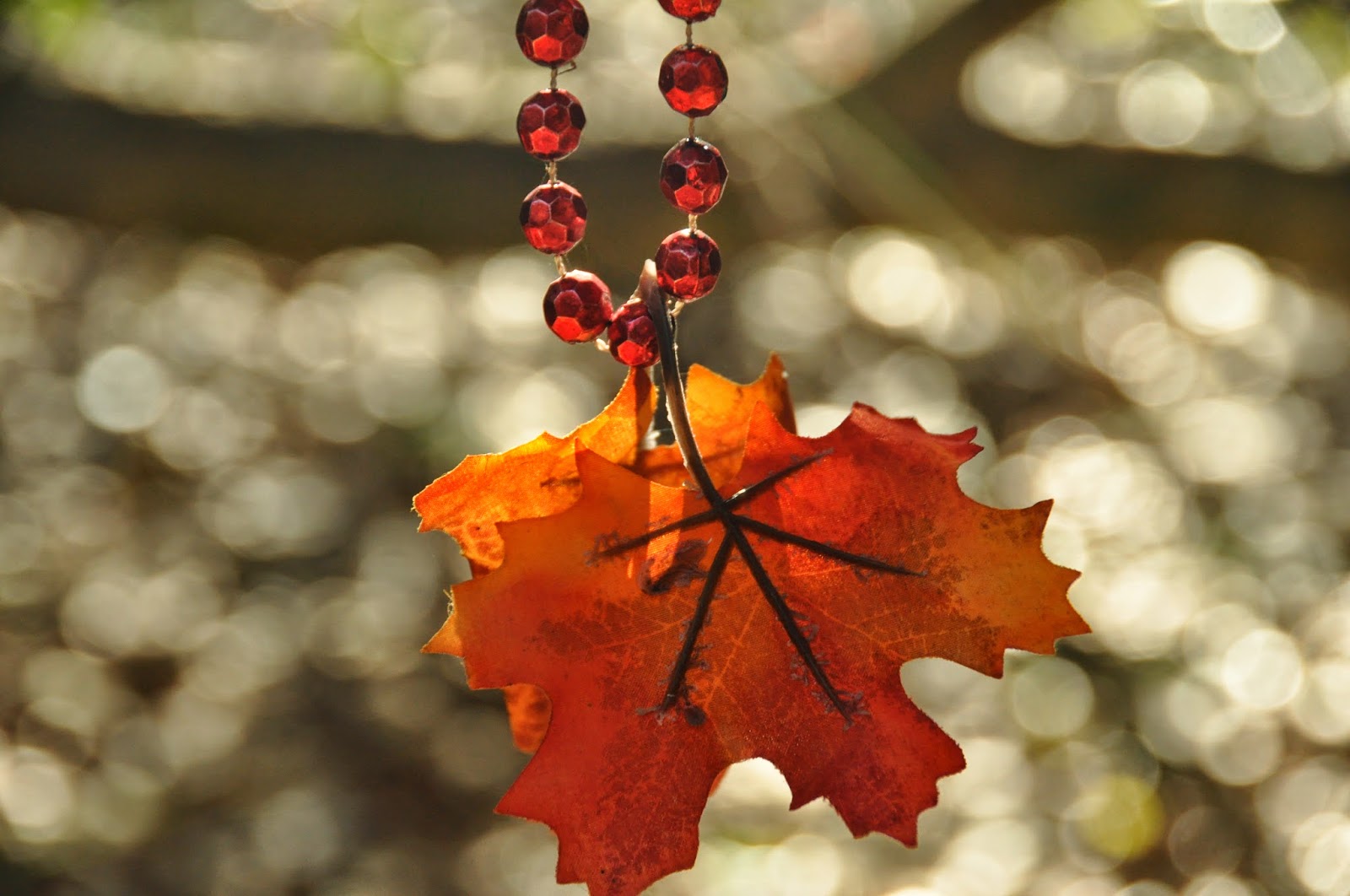 Just what is going on?

That was a question to myself on a recent walk in a wooded location in our community next to the city’s recreation department.

It's about a mile from where we live but in an area of high housing density. But this particular property is woods, about 150 yards across and 300 yards deep. 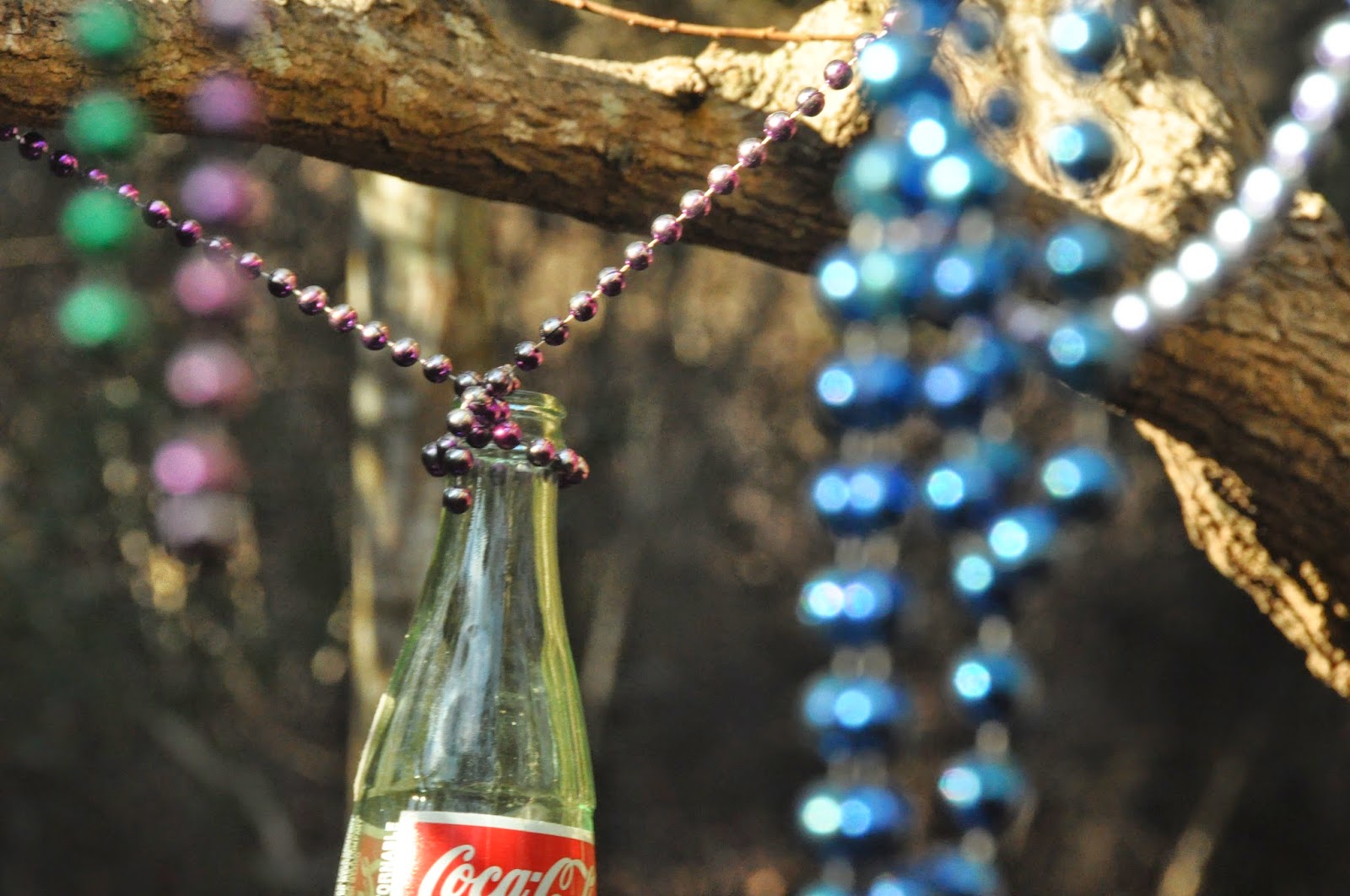 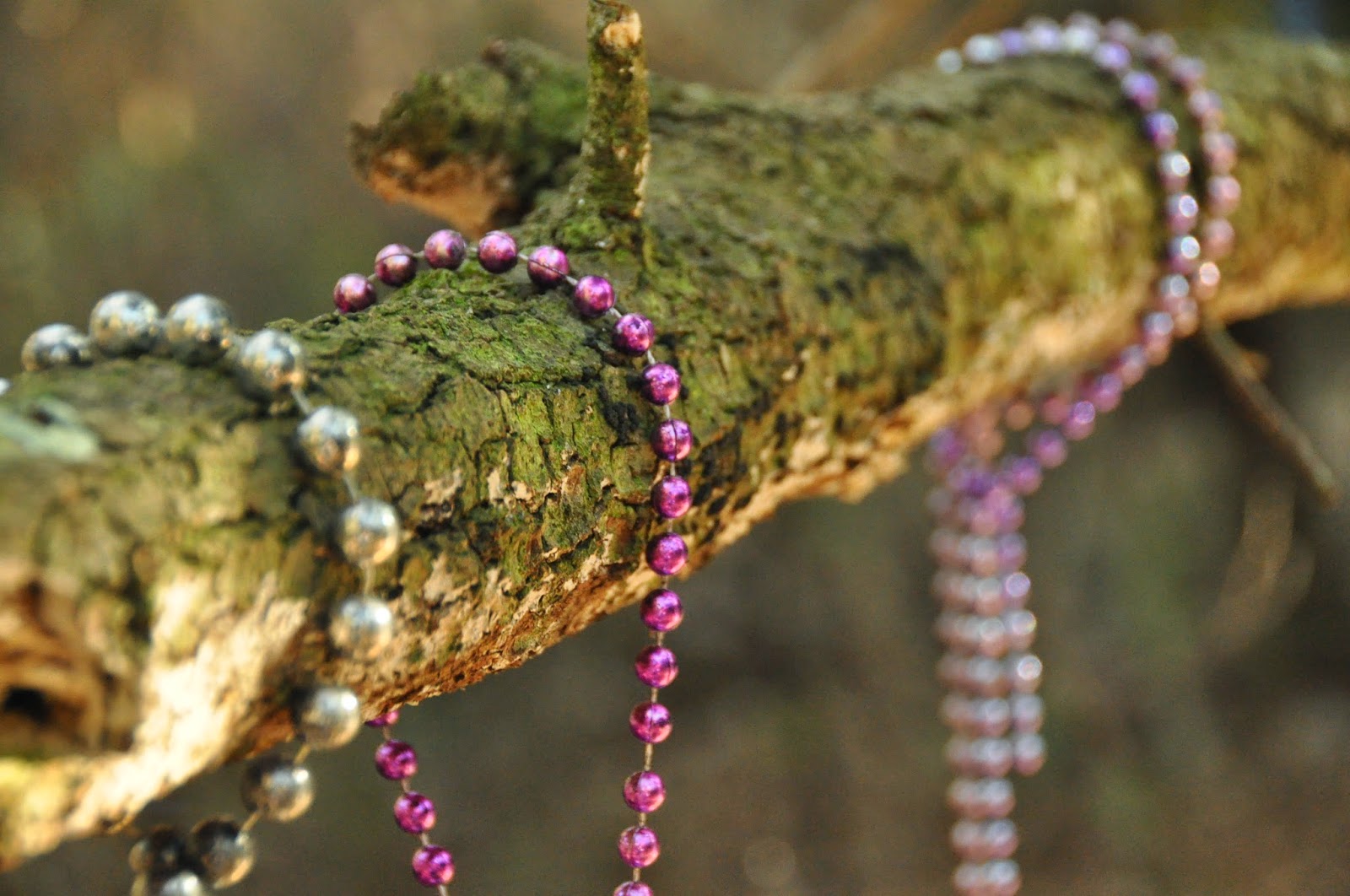 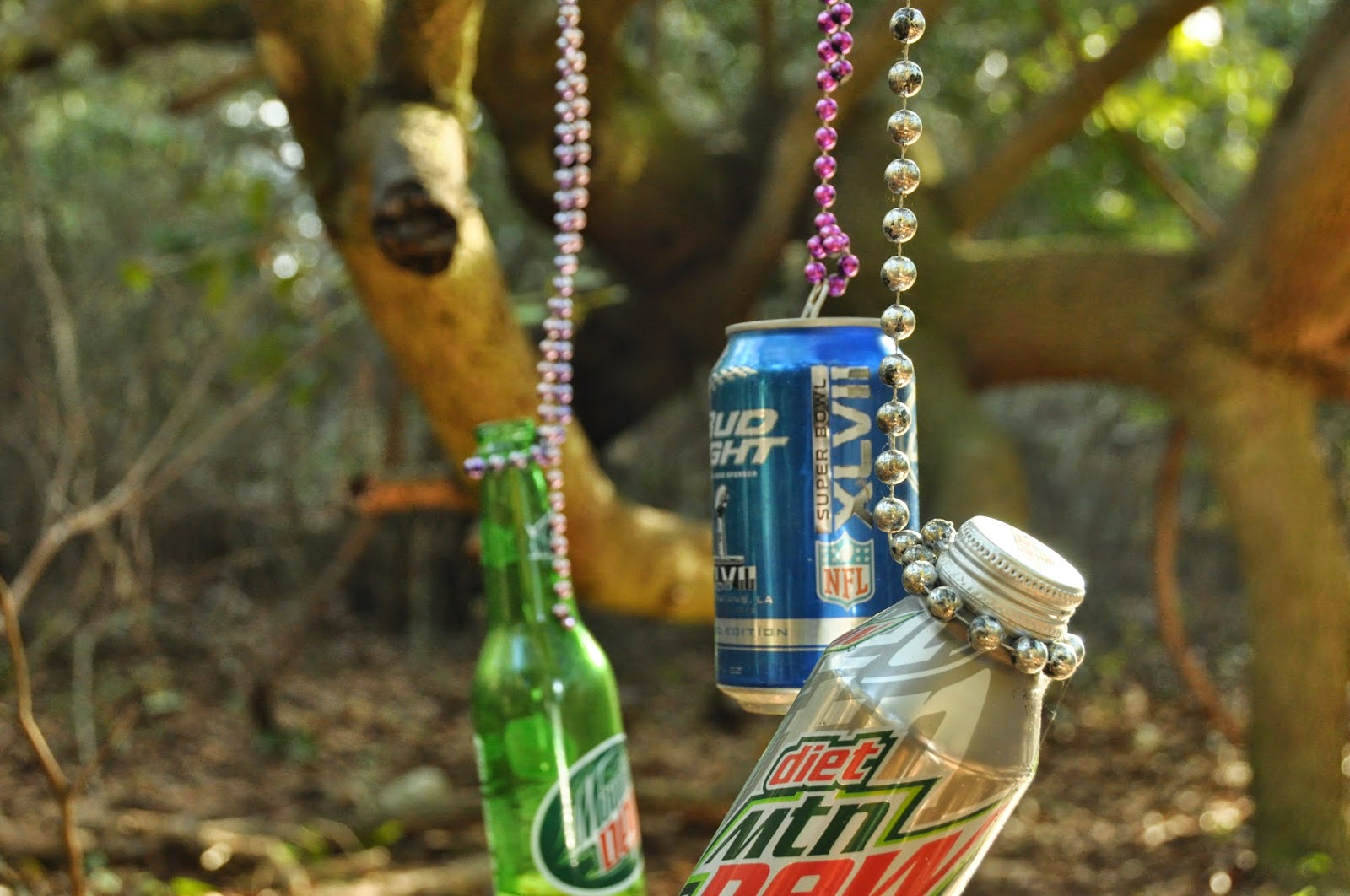 There are baseball fields to the north and housing developments to the east, west and south.

It is what I consider an outdoor oasis in the middle of a city.

Upon traipsing along a trail which crossed the property, I came across a setting where someone had apparently met and had a party.

It was probably some local teen-agers trying to find a deserted area where they could sit around, blow off some steam and slug down a few brews. 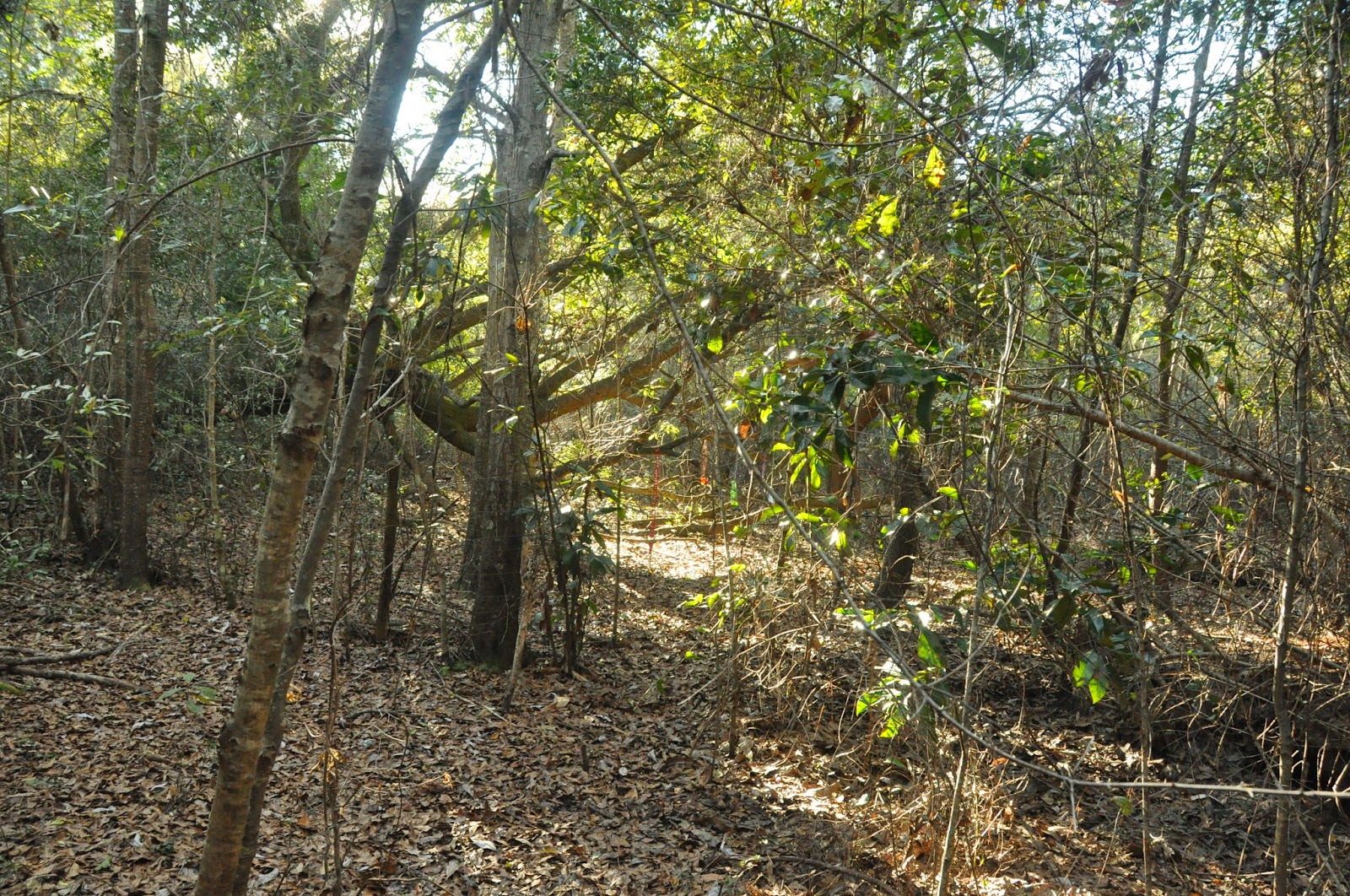 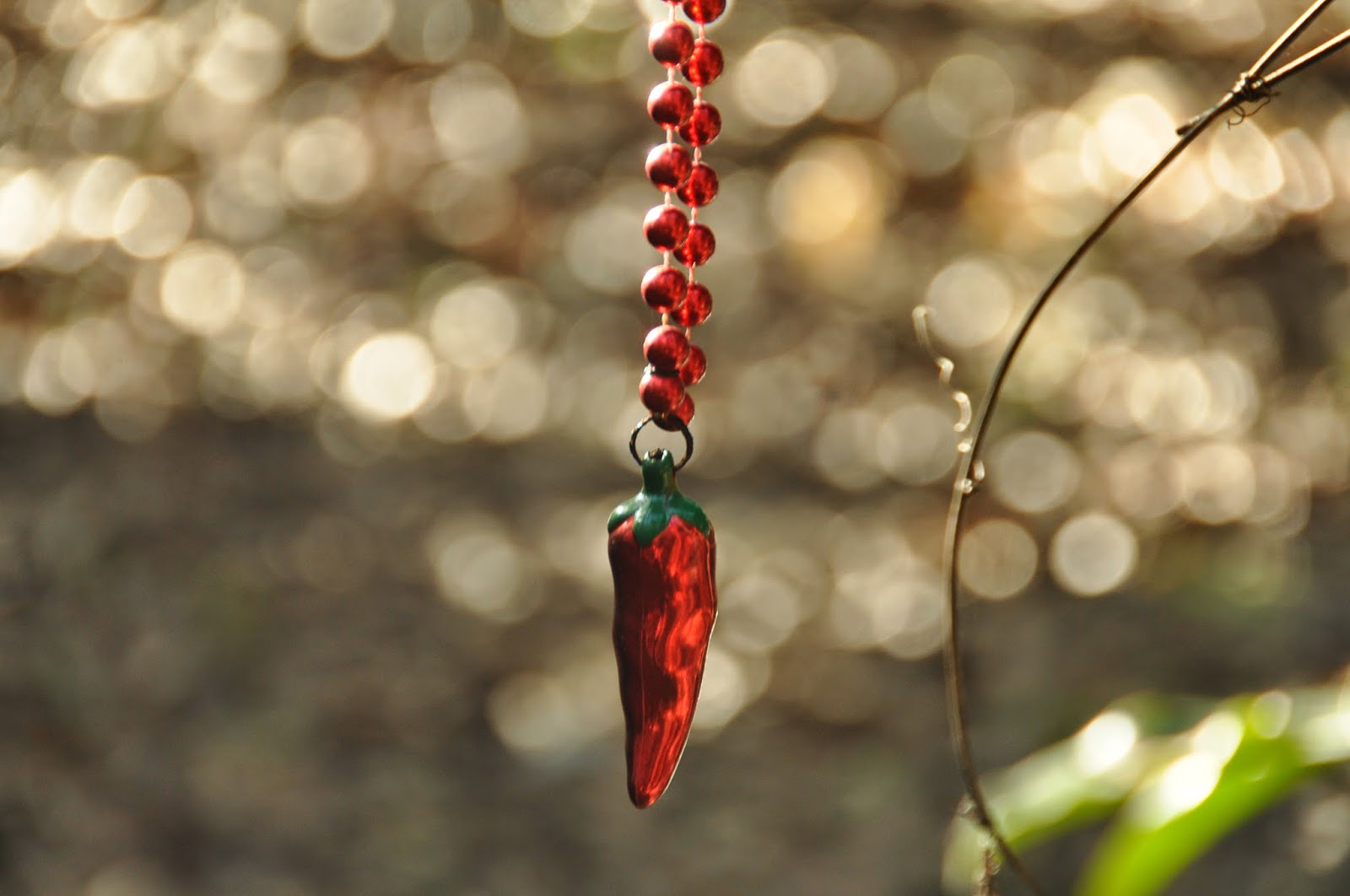 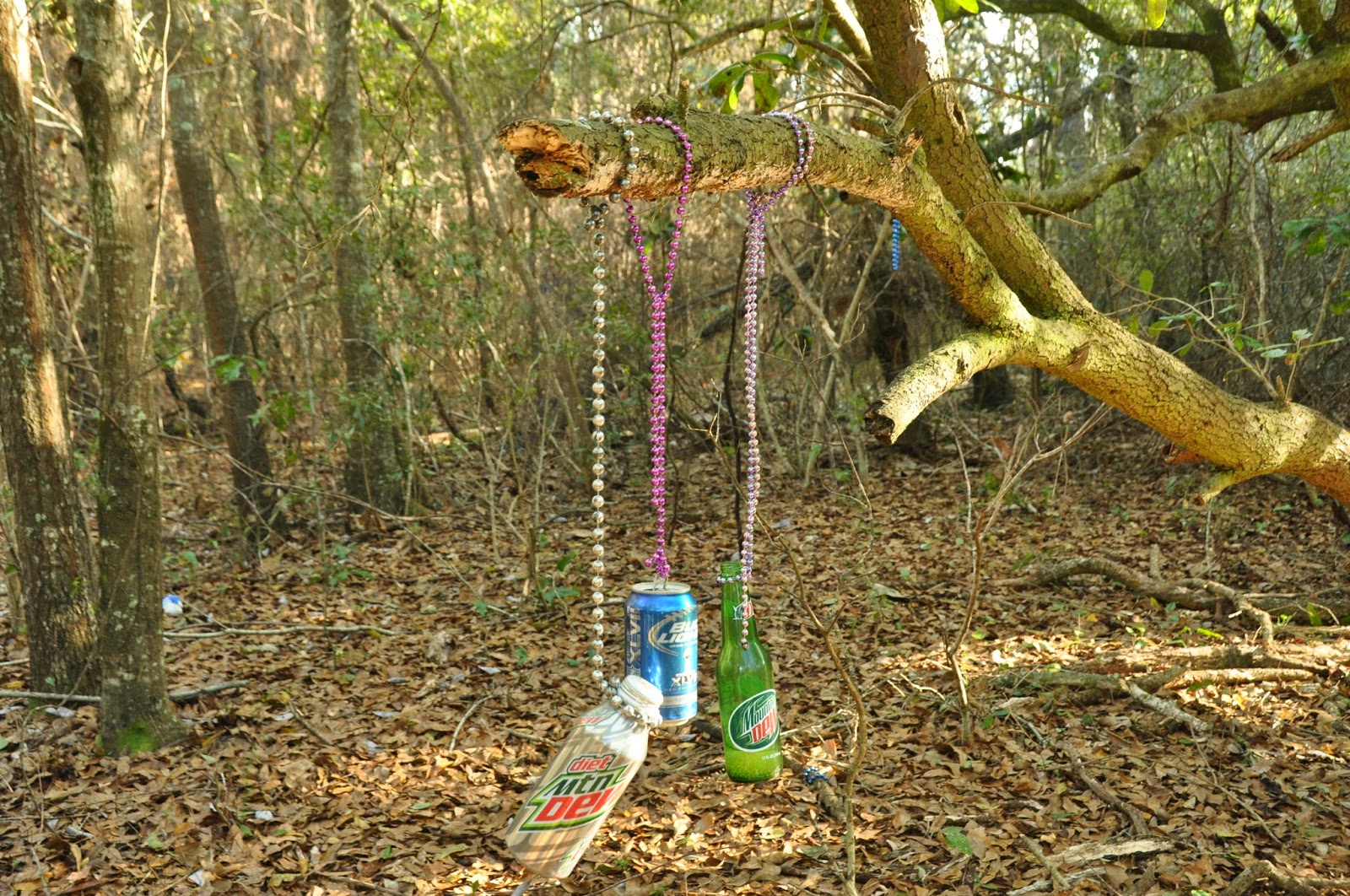 The area was decorated with Mardi Gras beads with empty cans and bottles strung from tree limbs. I found it quite interesting that something like that would be found in that location.

And least it looked festive. Some people walk through the woods and end up finding body parts and other type of witchcraft items. Glad that wasn't part of this outing.

At the time I passed through it was in the middle of the afternoon, so I didn’t feel threatened. Teen-agers would have been in school.

It just goes to show, one doesn’t have to travel far in search of unusual experiences.

Historical setting along the River Road 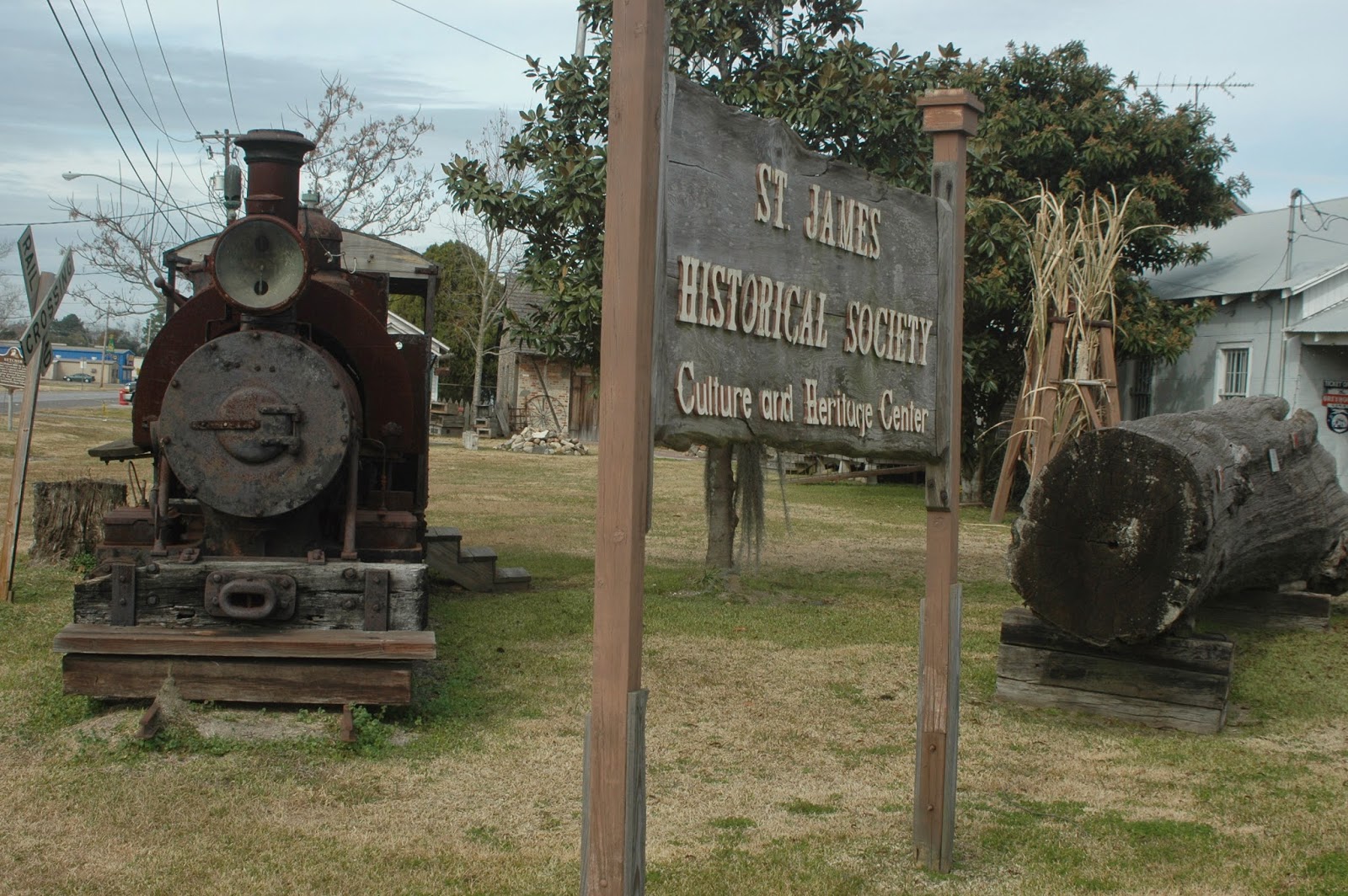 Such was the case when driving along River Road west of New Orleans.

Heading back to the Crescent City after visiting the Oak Alley Plantation, we took a turn, for whatever reason, and came across a group of older buildings.

It was the home of the St. James Historical Society Cultural and Heritage Center Museum in Lutcher, LA 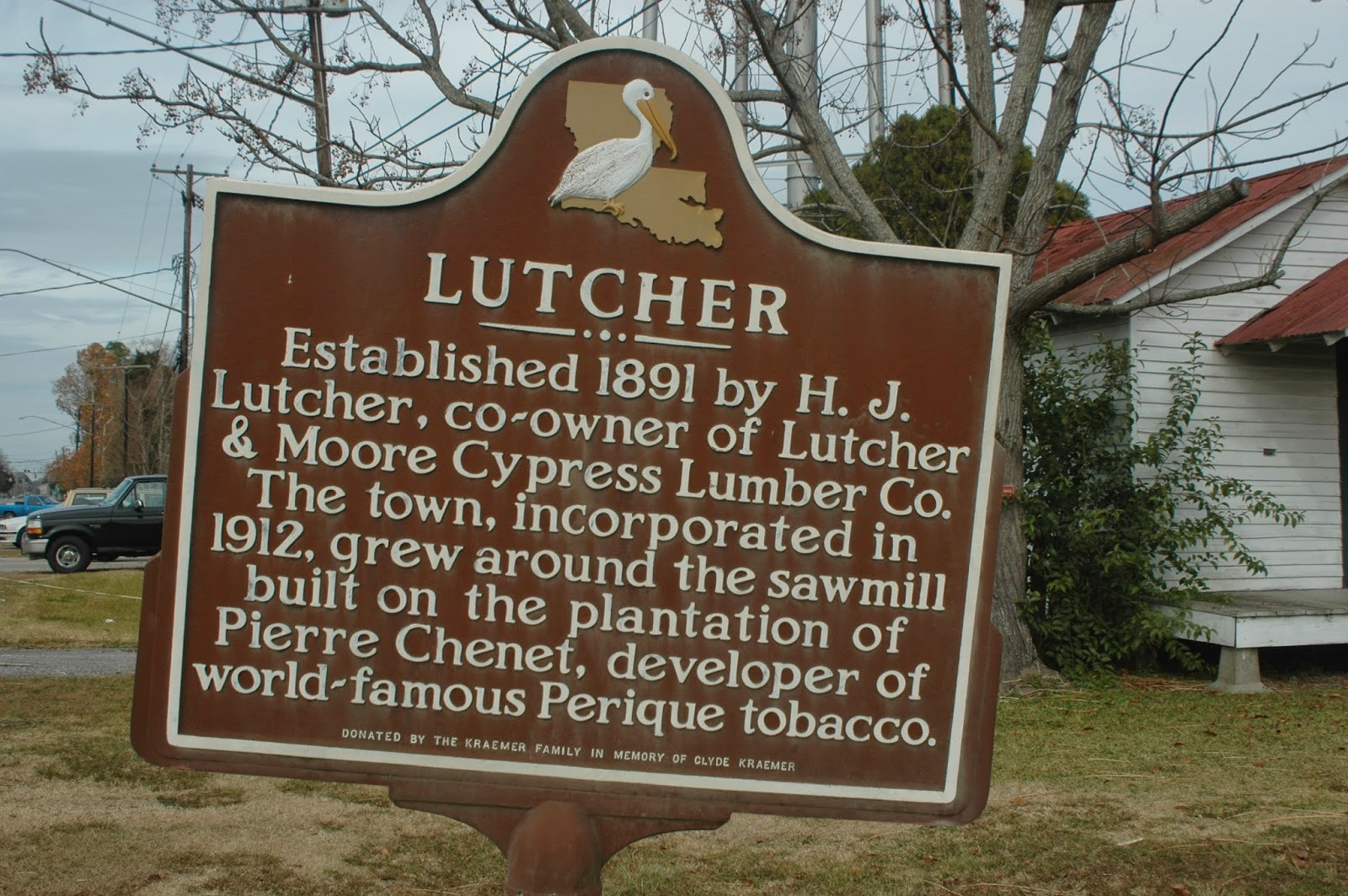 We weren't able to visit inside the buildings on this particular day, but did walk around snapping photos of the historical sites.

According to a website concerning the location, “the museum is filled with artifacts that tell the story and life in the early days of St. James Parish - saw milling on the Blind River, the history of Lutcher and Moore Cypress Company from which Lutcher got its name.” 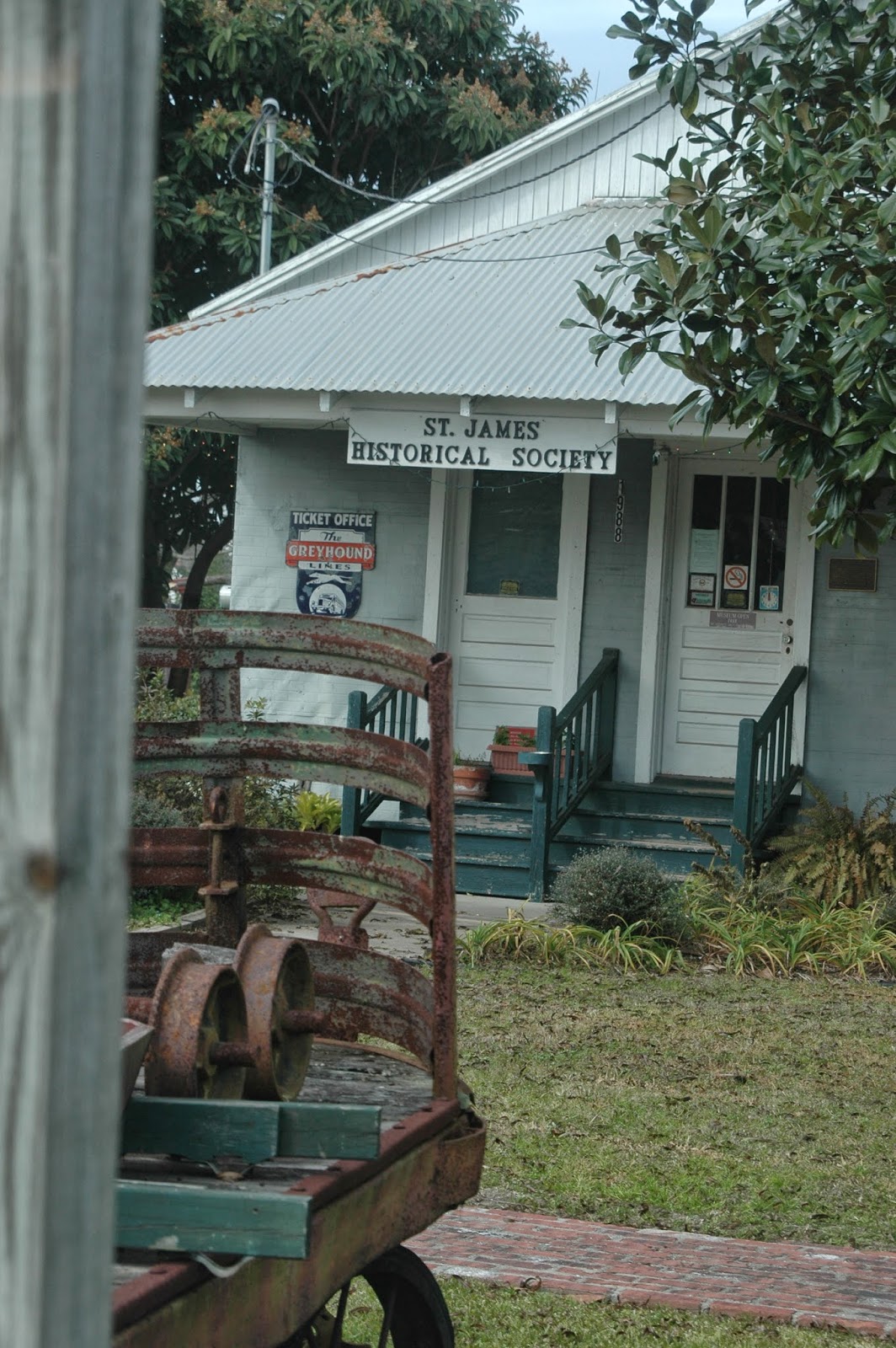 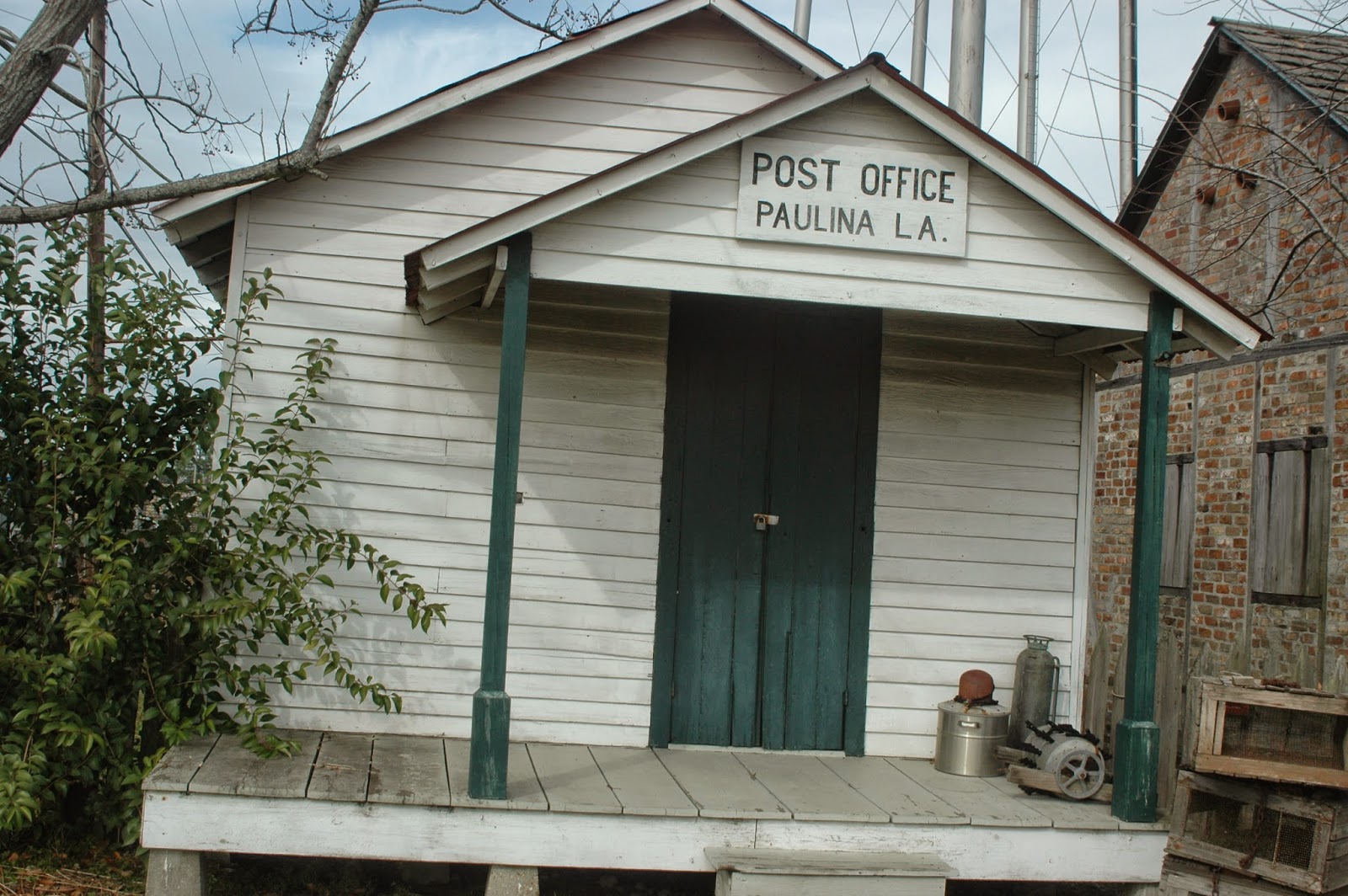 The area is also home to the 80-year-old Paulina Post Office Building, a working blacksmith shop, the Perique Tobacco Shed with displays of the processing and curing of tobacco as done by the local Indians 200 years ago. 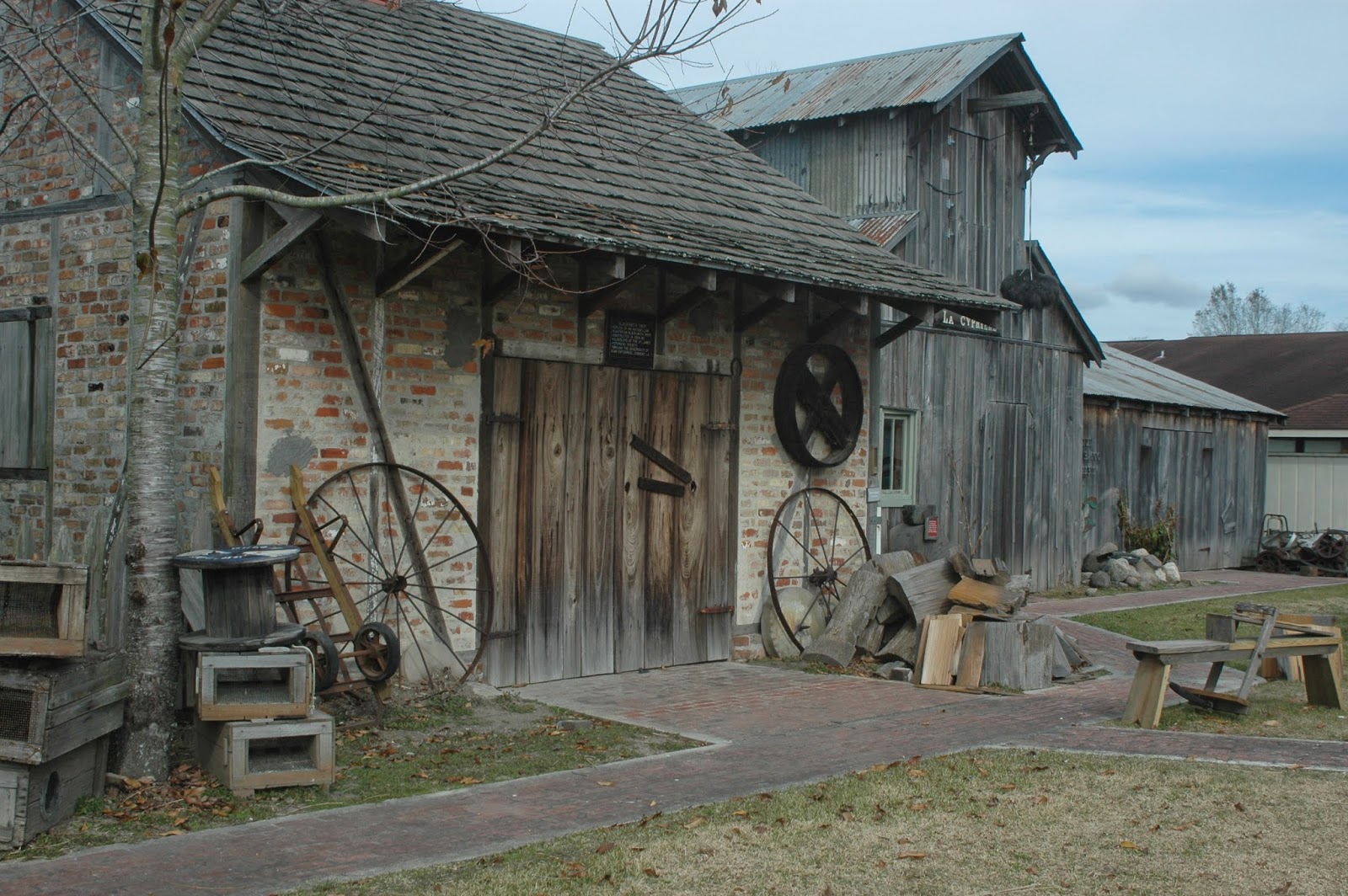 Another treat visitors can enjoy at Christmastime is the (last year's schedule) of the Festival of the Bonfires along the levee of the Mississippi River.

Maybe we’ll make it over to that event this Christmastime.

A taste of Paris, down South 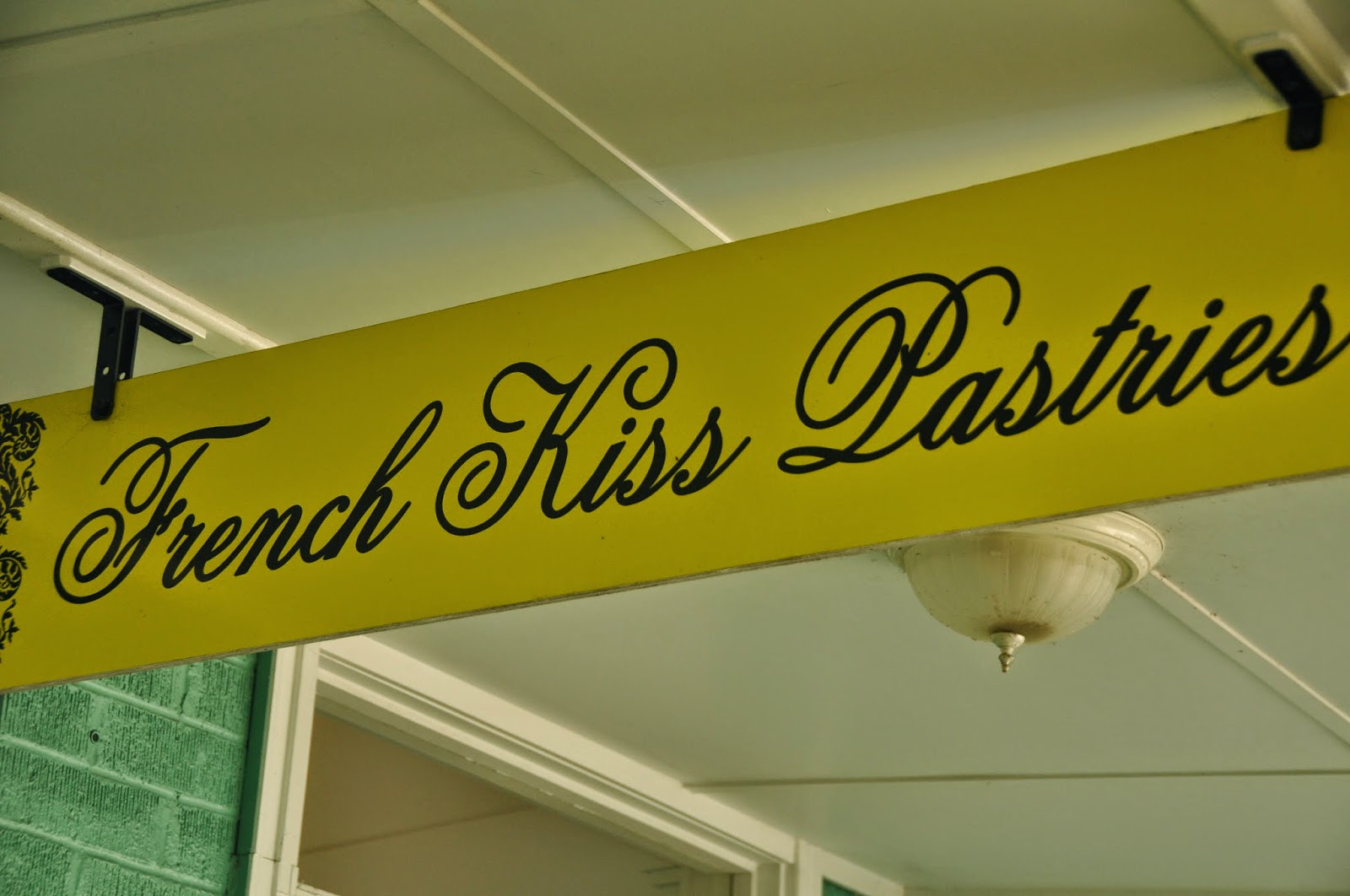 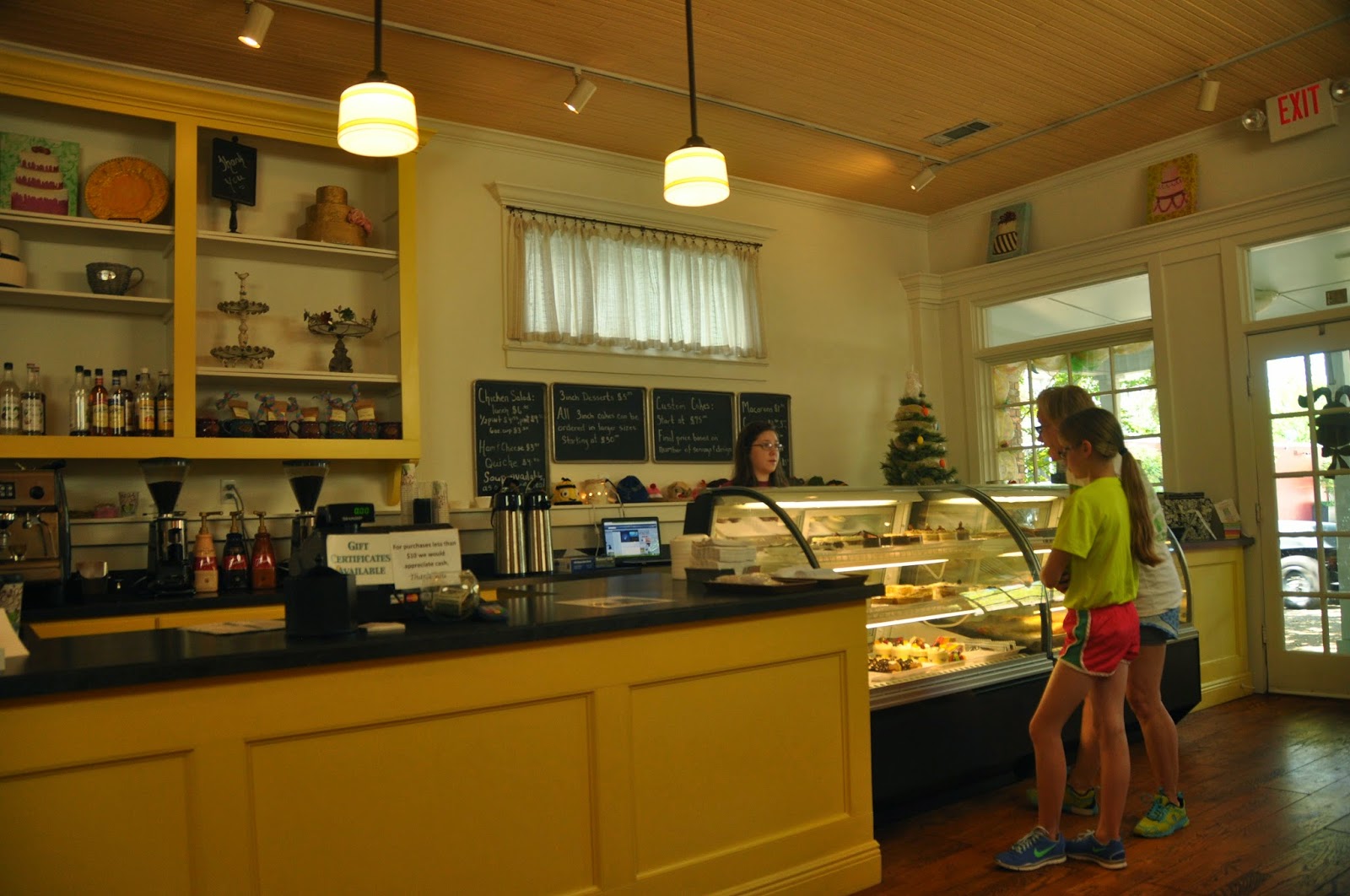 It is said that people find time to visit places hundreds of miles away, but never take the time to experience their local area.

Well, this past weekend, we did just that -- visited a new business locally, that is. 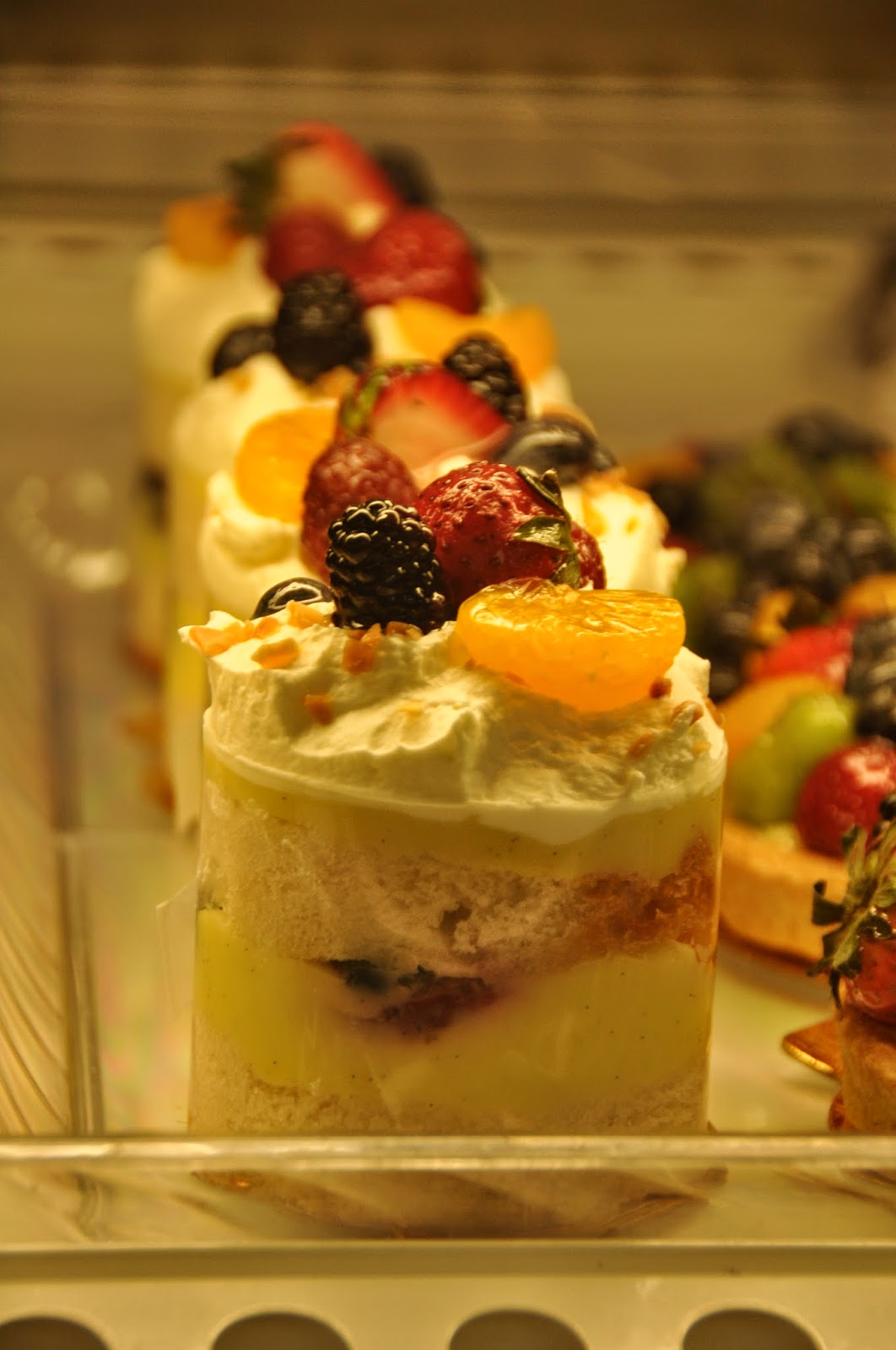 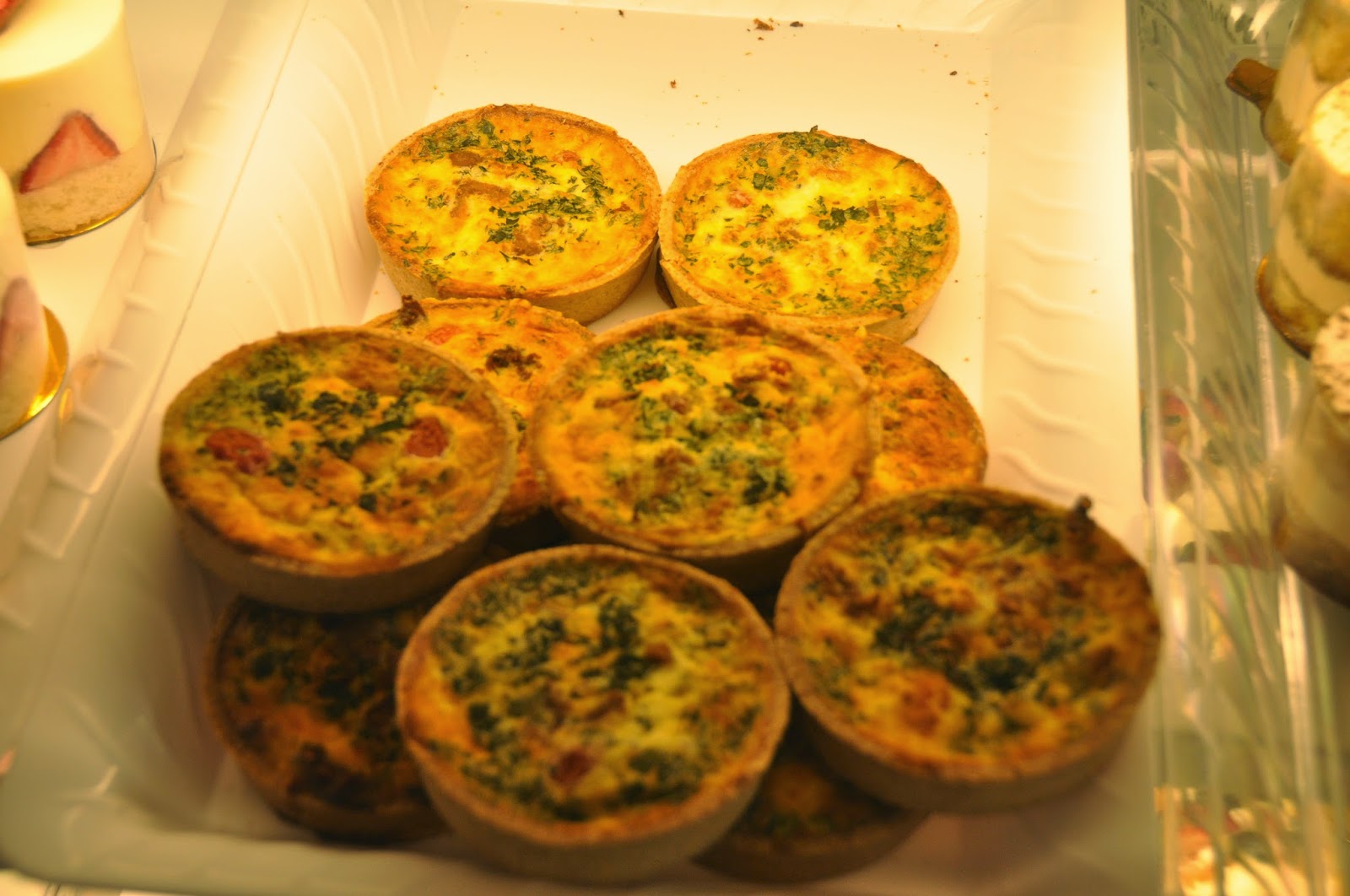 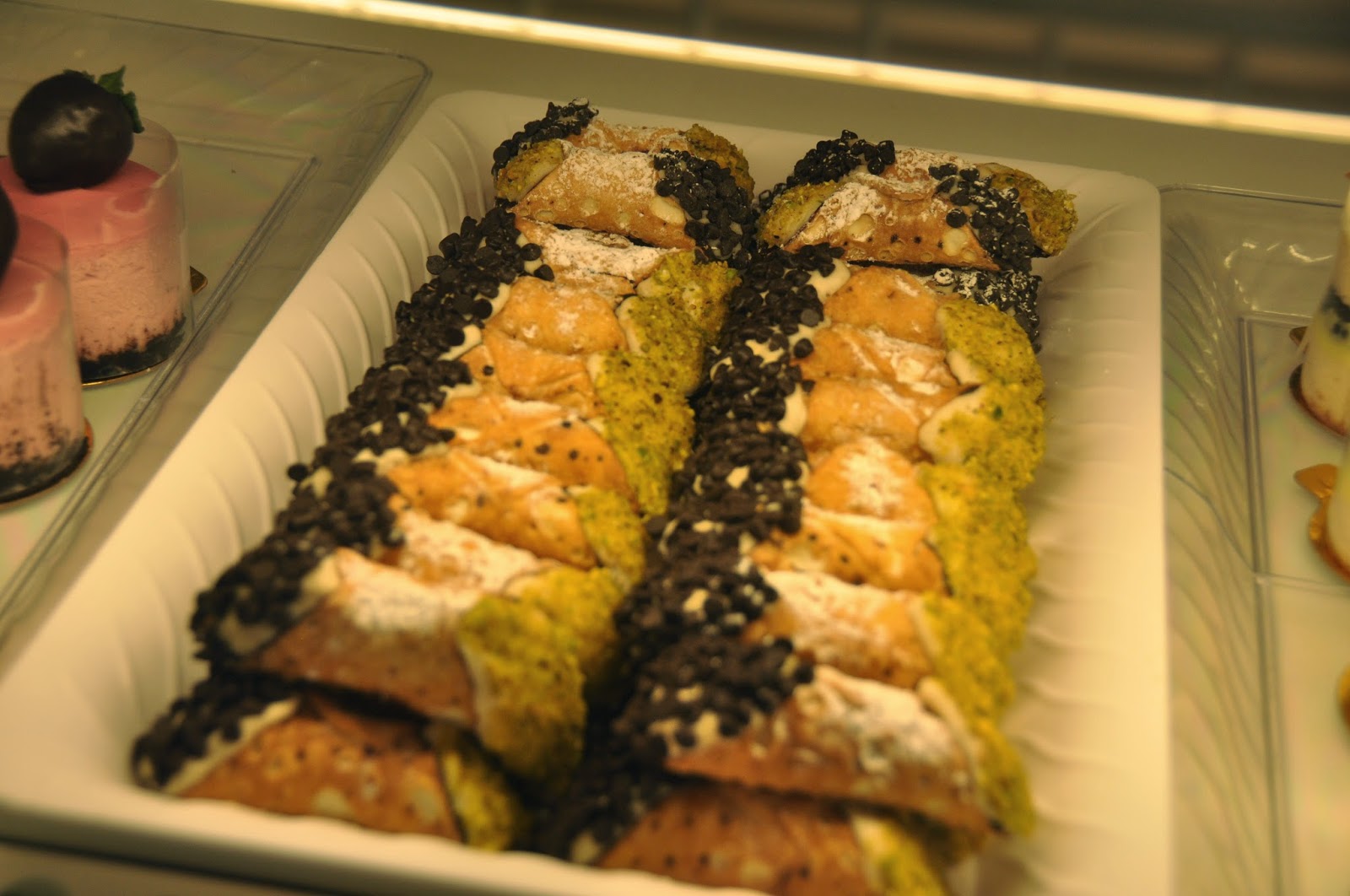 Our hometown of Ocean Springs draws thousands of tourists each year because of its quaint look, the overhanging oak trees, lively businesses and numerous festivals throughout the year.

If we drive through downtown, we are usually headed somewhere else.

But Saturday we decided to contribute to the well-being of a new-to-us
shop — French Kiss Pastries. 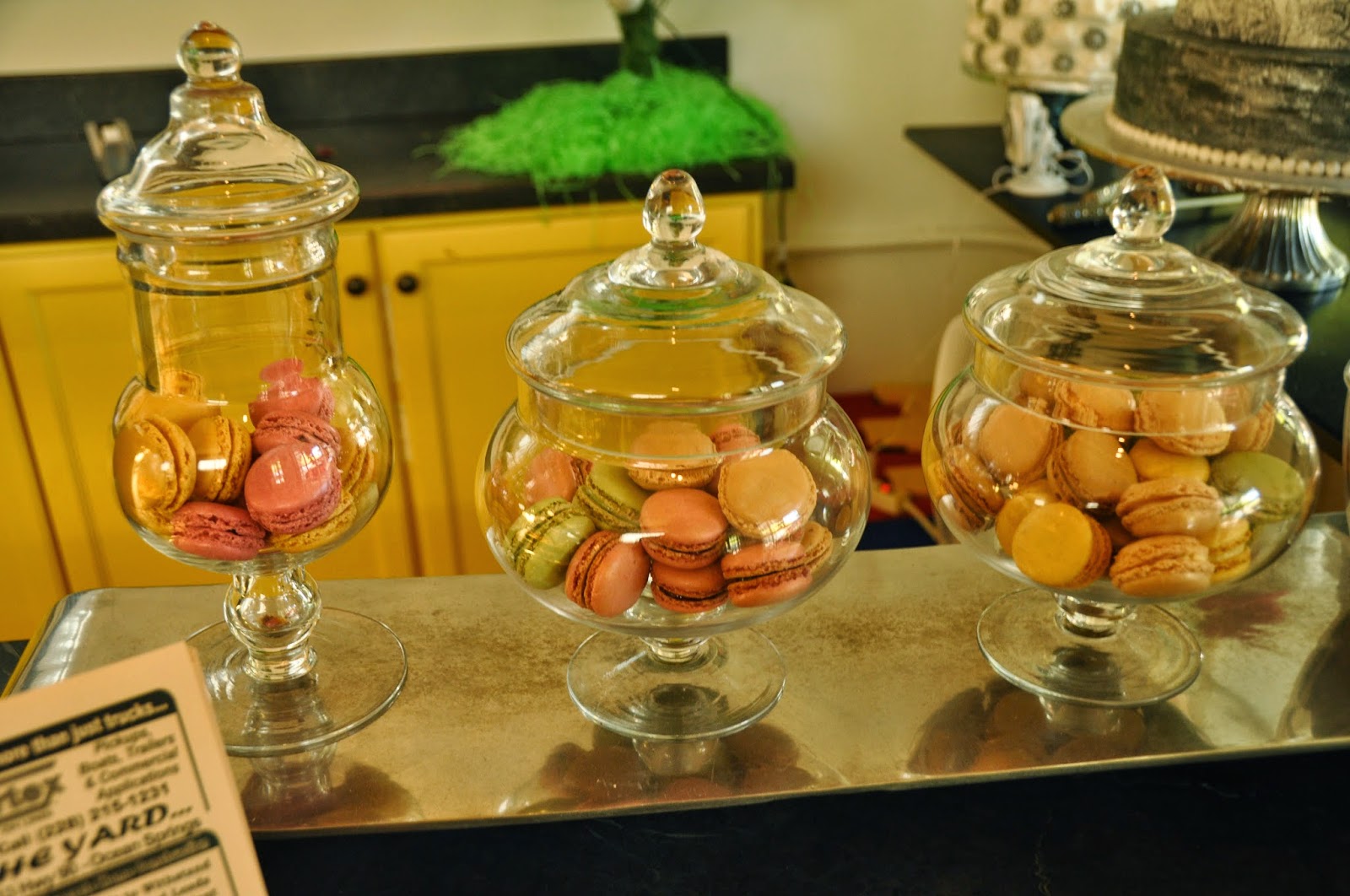 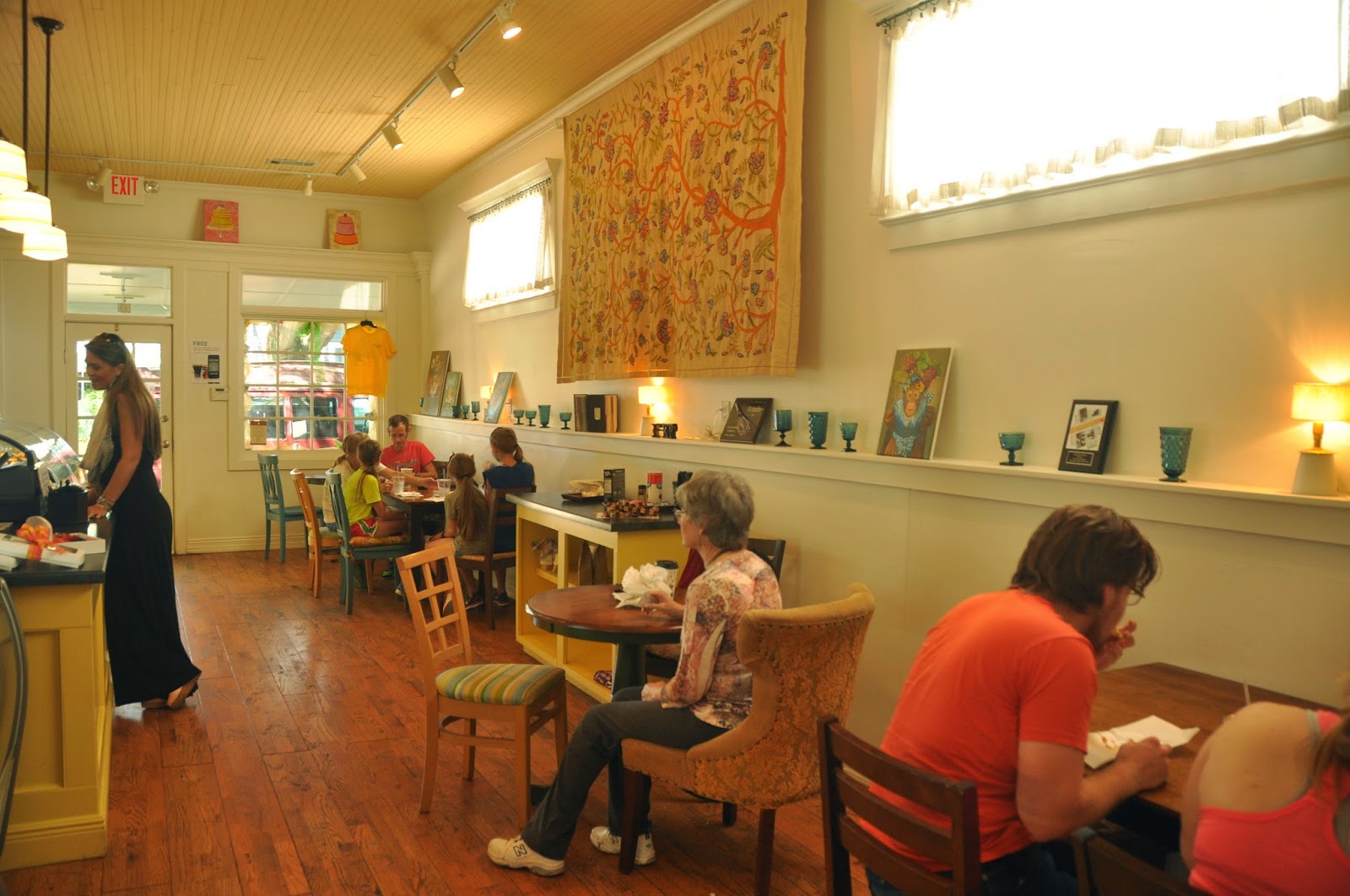 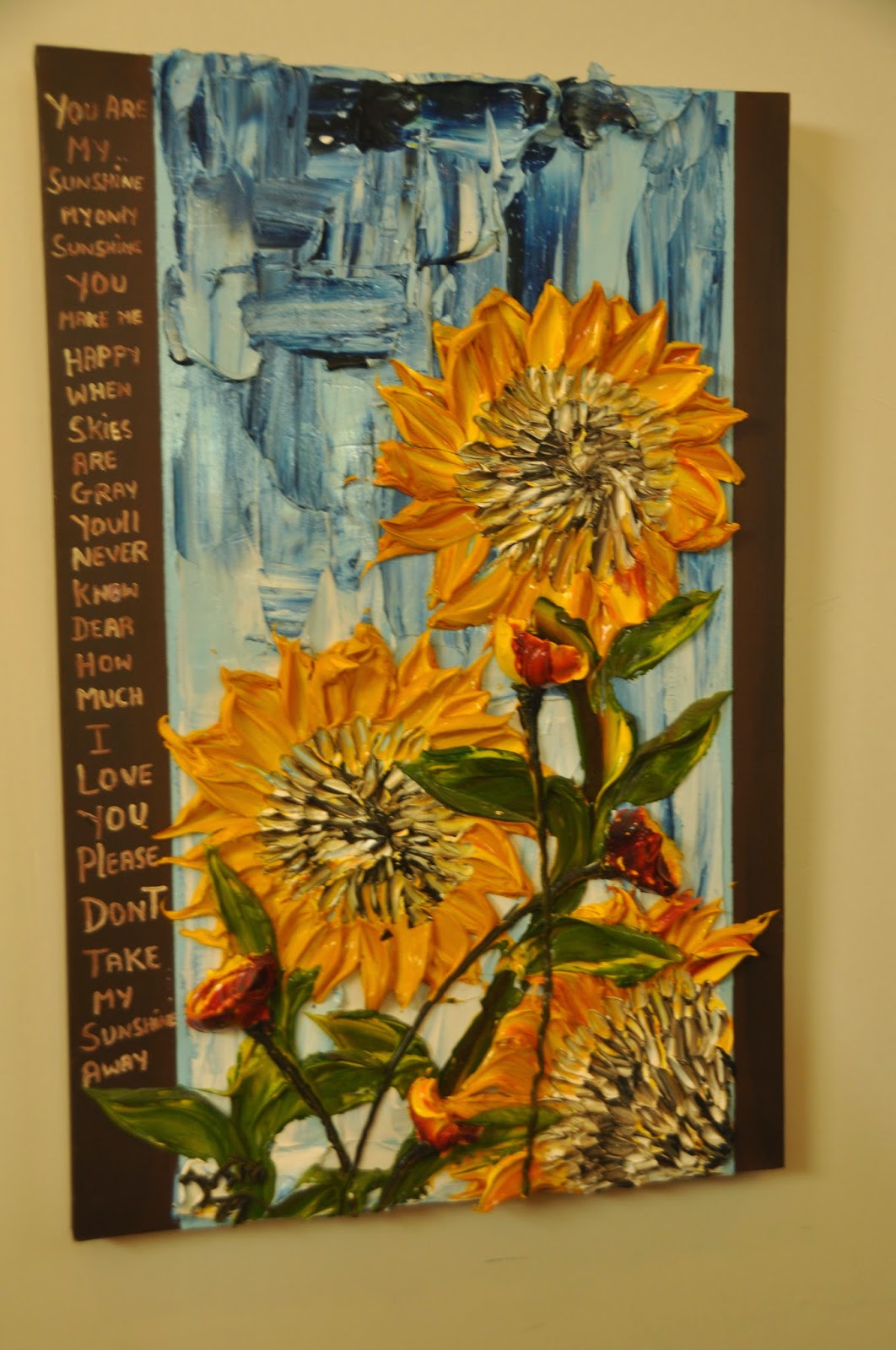 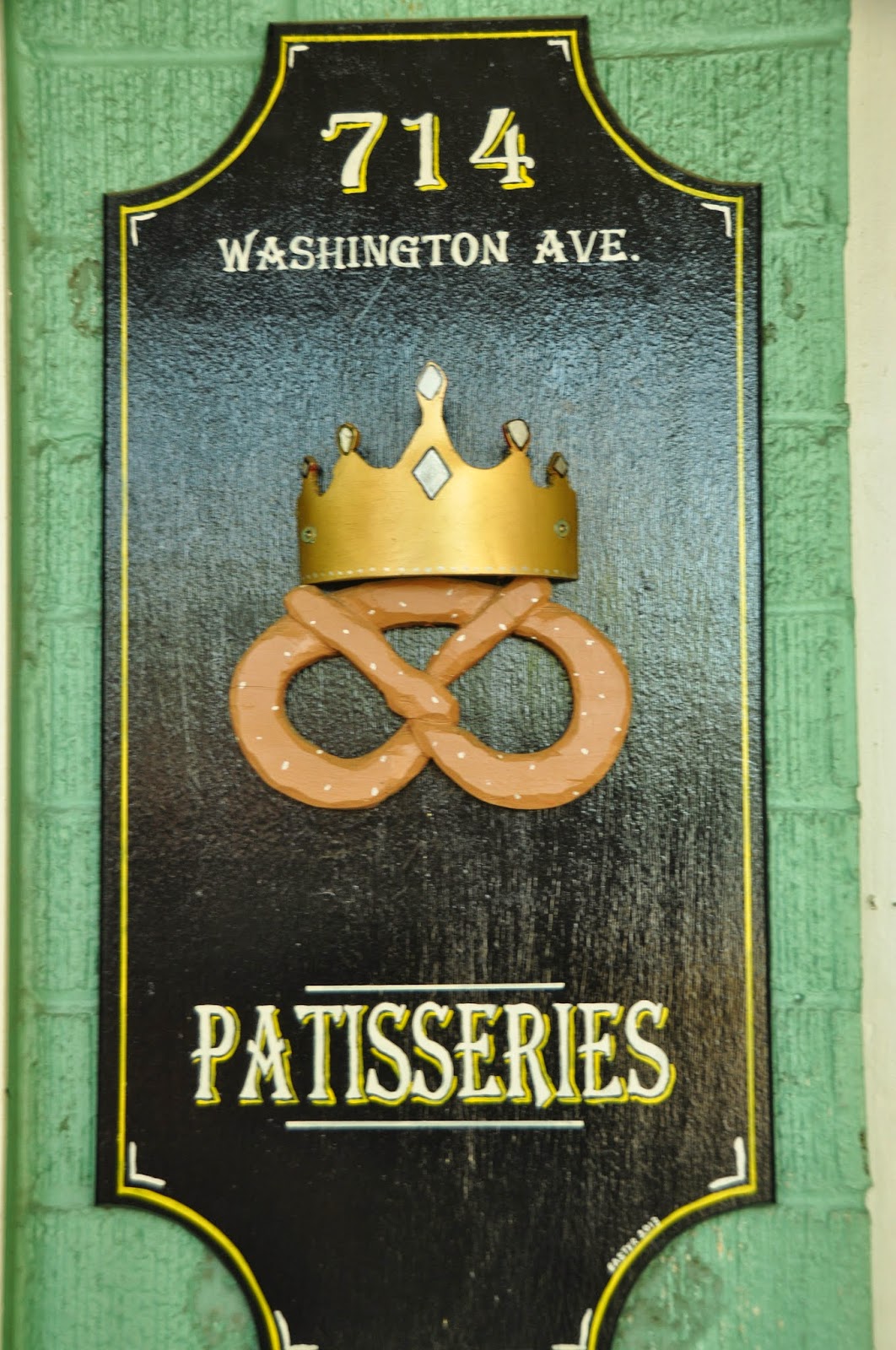 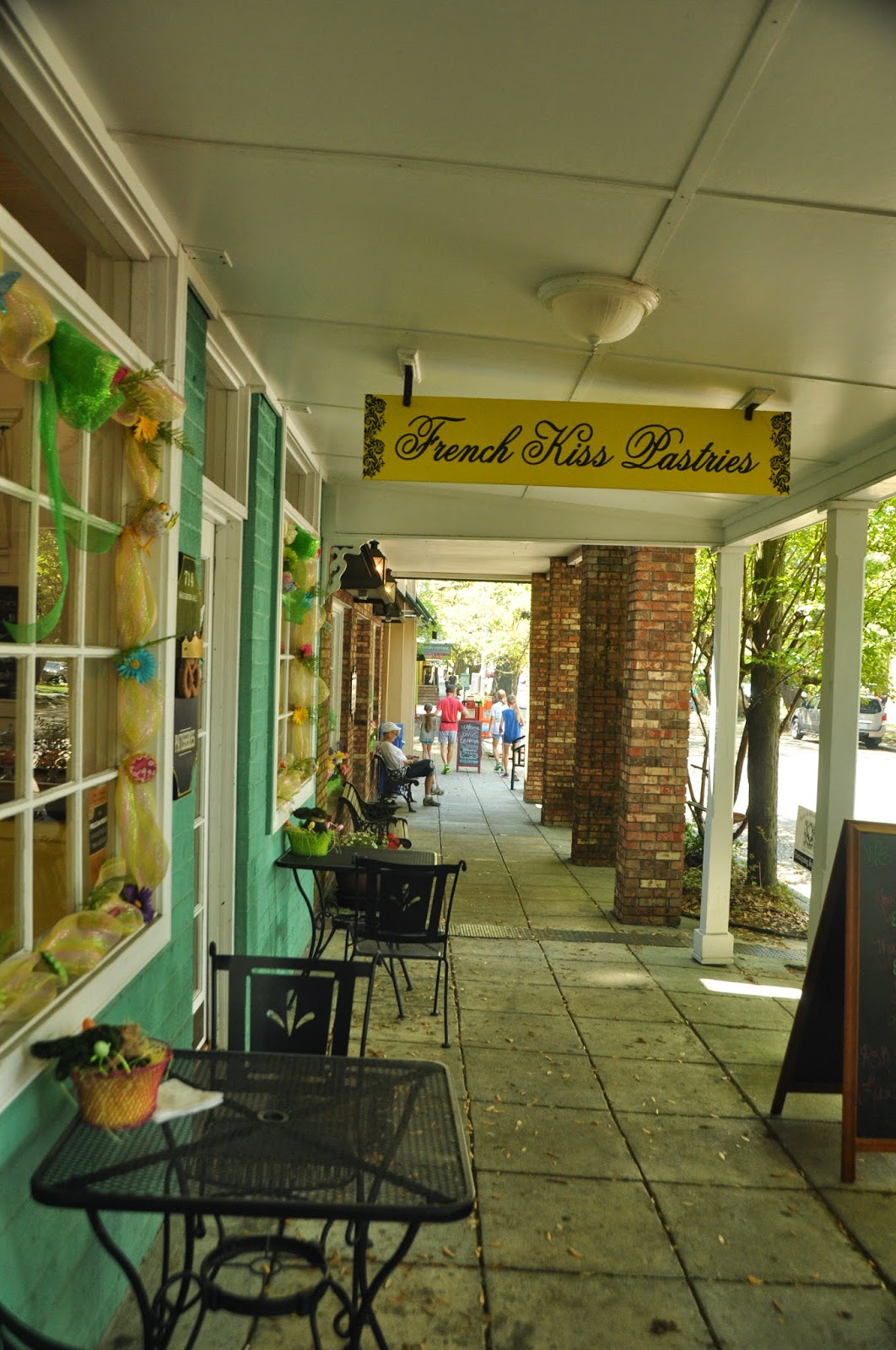 It is located on Washington Avenue on what is considered one of the two main roads through downtown. 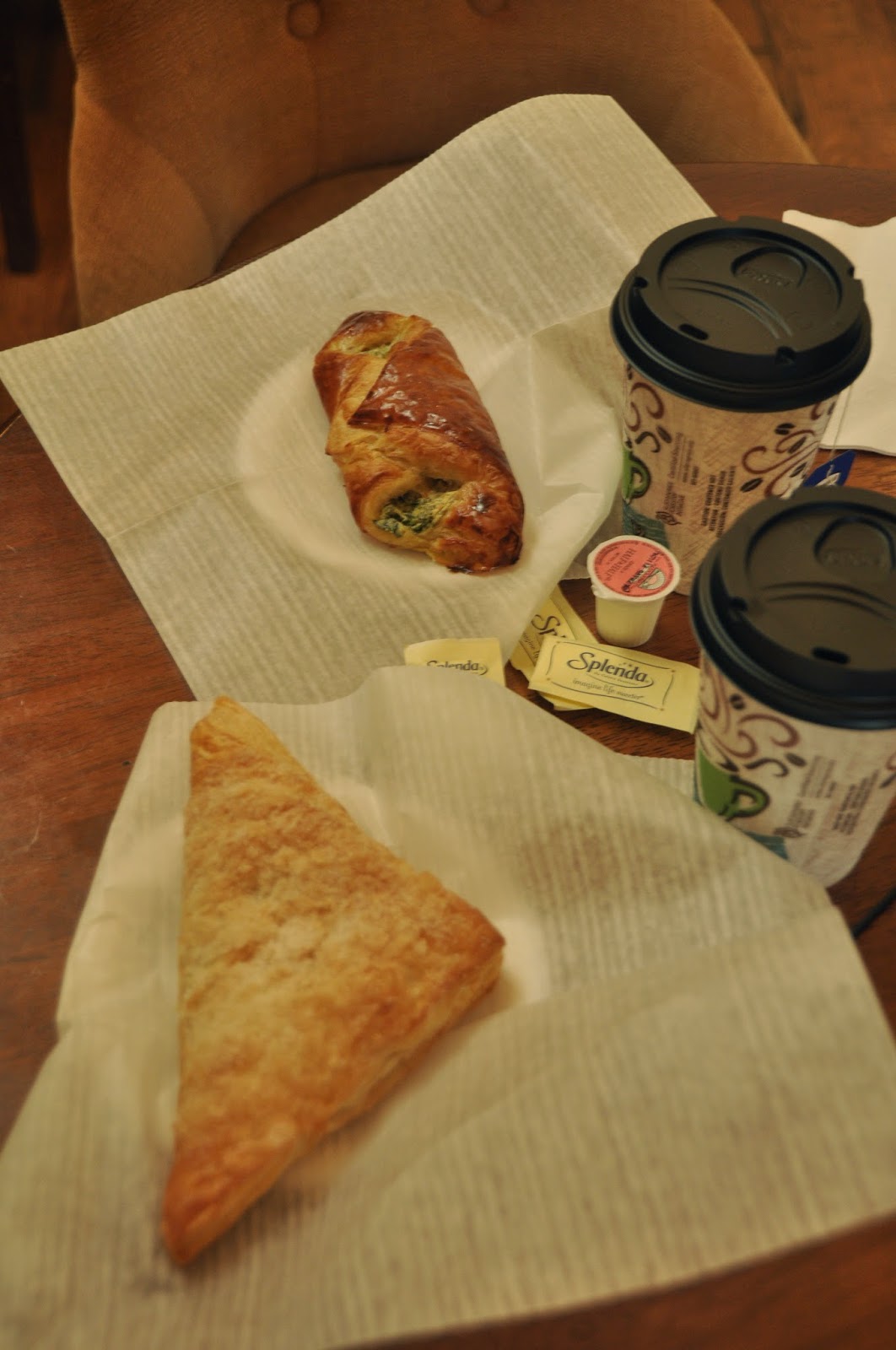 Wifey had  her usual hot tea and a small croissant stuffed with spinach and ricotta cheese, while I had a cup of coffee and a strawberry turnover.

There were numerous food offerings, all of which were very good. We didn’t take advantage of the wifi service since we were also headed to our other favorite coffee shop a little later.

French Kiss had a light and airy feeling to it, with about 15- foot ceilings and artwork displayed along the walls.

All in all, it was a very good outing, one which we plan to relive.

Posted by walter at 7:44 PM No comments:

Long ago and far away -- and a great memory

For those who have been following my blog for the past number of years, you know very well that we are a van family.

Since 1973 we have owned four Chevy vans and one GMC van. The only non-van was a four-cylinder vehicle back in the 80’s which we don’t like to talk too much about.

Three long-wheel base vans, one mini-van (when they were just that) and one long-wheel-base, high-rise vehicle, which we now own, have helped with our adventures throughout the country.

I love vans. I love to travel in them and they offer an option when one needs a place to sleep while on the road.

We’ve slept in rest stops, on the side of the road and in a Wal-Mart parking lot, not to mention the many regular commercial and national park campgrounds during our travels.

Shortly after purchasing our first van, a 1973 Chevy, my wife and I and at the time, 2-year-old son, set out on a three-week odyssey.

In something like 21 days, we covered just at 7,000 miles, traveling from our Mississippi coast home, all the way through Rocky Mountain National Park, Yellowstone, Glacier, up into Canada and then back down through Idaho, Washington, Oregon and to San Diego, CA before turning east.

And through all our travels since, one memory continues to return, and that is a stop along the Pacific Highway road.


What we did then, they don’t allow today (sleeping in vehicles on the side of the highway). Maybe it wasn’t allowed then, but they didn’t see us.

We were on the coast road heading south from San Francisco toward LA. It was along a long stretch where towns were 30 or 40 miles apart.

The afternoon was coming to a close and we decided to stop at a pullout and cook supper over a fire on the beach.

I can’t remember what we had for the meal, but I do remember there was a nice wind coming off the ocean and it was cold. We prepared a campfire and pulled out our Coleman stove for the main meal.

They sky had been clear all day and the three of us were just enjoying life.

We took our camping chairs and sat around the fire, covering up with some blankets. The meal came to an end just before the day did.

Slowly the sun began its descent. We watched it slowly dip into the ocean, keeping our eyes on it, minute by minute, second by second.

And then there was just a beautiful afterglow.

Sometimes when I think back on that particular trip, I close my eyes and can still picture the three of us sitting on the sand, watching the sun ease into the Pacific as the cold wind blew and the fire flickered.

What a great memory.

Posted by walter at 8:26 PM No comments:

Magazine keeps up with the old and new

With spring already here, its time to think about some trips.
And as usual, there’s always our plans to head to the Great Smoky Mountains National Park.
We’ve already have two different dates, in July and September, locked in. And it is likely we will be passing through that area following a wedding in Virginia in early June.
Just can’t keep away from the mountains.
My first experience was as a pre-teen. My family drove from the Mississippi Gulf Coast to Chicago where my father was born and grew up.

We took US 49 north and went up through the middle of Mississippi, hitting the west end of Tennessee and Kentucky and then the final leg to Chicago.
The return trip seemed to always be down through Pigeon Forge, Gatlinburg and then across the mountains into Cherokee before heading home.
I guess from that first trip, I have loved the mountains. And every three months, I can now add to my knowledge of the area by reading the Smokies Life Magazine.
The publication is sponsored by the Great Smoky Mountains Association and is part of the membership package. Others may purchase the magazine at park visitors centers or subscribe and have it mailed.
The more we visit the mountains, the less we seem to know about its history. And the magazine helps fill us in on all sorts of items including hikes, fishing, old railroad towns, hotels and the effort it took to make the area a park.
I look forward to the quarterly publication and scouting out some new adventures for my next trip.
Pushing 70 years of age this month, I hope to still be taking advantage of my lifetime membership for at least another 20 or 30 years.
Next post: April 8, 2014

Posted by walter at 8:02 PM No comments: