'Way out' Christmas in July

Christmas in July?
Where else but San Francisco.
Well, it really wasn't Christmas-style exactly, but while watching an entertainer at the Cannery on July 4 a few years ago, the area took on a different ambience.
I don't know exactly who they were, or where they got their holiday cheer outfits, but it was different and off the chart.
Being from Mississippi (and our conservative ways) , sometimes we may be shocked over what we see.
But I've got to admit, we have been to Fog City so many times and understand its ways that we can handle most everything, especially when it happens in the major tourist venues.
I don't go down to some sections of town, because it could really embarrass me.
But I digress. 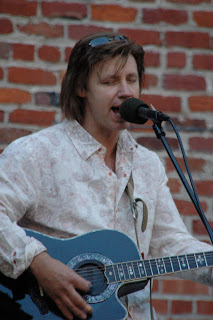 I don't recall the entertainer's name, but he was putting on a good solo show singing and playing his guitar. He was knocking out hit after early baby boomer hit, and we were really enjoying it.
And then they made their grand entrance.
It was a bunch of people dressed in sort of Santa outfits and dressed likewise and to the extreme.
They actually picked on me.
We were sitting about 50 feet or so from them, when one of them headed my way and shouted out "Here's Santa."
OK, I am as old as Santa, and I did have a beard that was tinged with white.
I didn't feel too embarrassed and for a moment I had my "15 seconds" of fame. (I know the saying is "15 minutes.")
It was another memorable time in the City by the Bay.
Next post: Sept. 6, 2011
Posted by walter at 11:32 AM 1 comment:

During last week's blog, I said "whatever goes up must come down" in relationship to the US 50 trip over Monarch Pass in Colorado.
Out west, there are lots of such situations.
On the front end of the Monarch Pass trip, we went through Las Vegas, but didn't want to stay there. it was too hot and we didn't want to pay for a room. We headed northwest on US 95 toward Tonopah and then planned heading west to go into Yosemite National Park.
Just north of Vegas, we pulled over on the highway and worked to make a decision on where to spend the night.  We pulled out our maps and went to work. It was about 6 p.m. There was still some daylight, but it was fading fast.
We knew that if we wanted a place that was cool, we would have to get to some higher elevation. The only place in the immediate area that looked promising was Mount Charleston.
So we pulled off and headed up Nevada 157 and then onto Nevada 158 to the Hilltop campground. Heading that way the elevation signs went from about 3,000 feet and kept climbing -- all the way up to about 9,000 feet, and the temperature kept dropping.
After a steady climb that took, I guess, almost an hour, we arrived at our spot at Hilltop at 8,400 feet. Nothing fancy, but a place to stay, a picnic table and a toilet and water. That's all we were looking for.
We filled out the form to register for the site, put in the money and deposited it in the repository.  Apparently we didn't do something exactly right, because sometime a little past midnight, the campground "host" came by our site trying to find out if we had paid.
After clearing up the situation, we feel back into dreamland, happy to have a cool place to stay for the night.  The next morning we retraced our route.
As I said, what goes up must come down. Its the first and only time, I believe that I was ever able to coast for at least about 20 miles thanks to Nevada 157. Quite a gas-saving experience, albeit the climb up the previous day took a little extra petrol.
Next post:  Aug. 30, 2011
Posted by walter at 9:53 PM No comments:

Driving US 50 through Colorado, especially over Monarch Pass, can be a white-knuckled experience.
It was for me.
A few years ago my wife and I, on a roundtrip to California, got on the highway in Nevada and took it all the way east into Colorado.
It was a memorable drive.
Heading up to the pass traveling east, the mountainside was on the left. The drop-off side was on the right. We were on the right side. And there didn't seem to be much, if any protection.
I recall that in the higher elevation, there were two lanes going up and just one lane in the opposite direction.
Without much protection from the dropoffs, and when there wasn't any traffic coming up behind us, I would drive the centerline of the two lanes that were heading up. The pull was such that we were only doing about, maybe, 40 miles per hour.
It was a slow and arduous climb. It was one of those times when I had most of my attention on the road and my wife was watching the scenery and commenting on the dropoffs.
Slowly but surely we made it to the top, taking time to stop and take a picture to record our success.
While the pull up was slow, the descent was fast. After all, what goes up, must come down.
In searching the internet about Monarch Pass, I found a website that offered a fast nine-minute trip up the mountain.
I really enjoyed the video, mainly because, someone else was driving, and I assume that since they posted the video, the trip ended safely.
It brought back a lot of memories.
Next post: Aug. 23, 2011
Posted by walter at 11:07 AM 2 comments:

Reminiscing about our 'Roman Holiday'


Audrey Hepburn wasn' there. Neither was Gregory Peck nor Eddie Albert.
Alas, none-the-less, it was still a "Roman Holiday" for my wife and myself a few years ago although there wasn't any royalty involved.
Nor were there  fights on a river barge nor rollicking around on a motor scooter.
I often feel that one's activities are so hurried on a short vacation to whatever locale that the true essence of the area isn't fully appreciated.
When watching a movie on such a location as Rome, I always find myself wondering why didn't I see certain things that the movie so easily brought into perspective.
And the way movies are directed and presented, they entrap viewers and force them to have emotions about certain events.
When running around Rome in three days trying to catch all the sights, one's emotions could easily be one of exasperation followed by mental fatigue.
And it always seems that on the last day or so, an event, activity or place comes into play, but time is short and it can't be revisited and enjoyed again.

Such is the problem with short visits to most areas. The best thing to do, I guess, is to shoot a lot of pictures.
Pictures themselves don't hold emotion, they create emotion in the person looking at them.
Rome was a busy place. We hurried to and fro.
Looking at all the pictures we shot, the feeling comes to the forefront, "wow, we did all of that and saw all those things."

It was a hurried time.
But back home, pictures offer the option of taking a slower trip. And continuing the enjoyment.
Next post: Aug. 16, 2011
Posted by walter at 11:03 AM 1 comment:

Palo Duro -- pretty but too hot in June


It has been hot in south Mississippi this summer.
Matter of fact, its been hot all over the country this year.
Texas has been hit really hard. Dallas is looking at more than 30 straight days of triple digit temps (hitting more than 100 degrees F).
And that reminds me of my wife's retirement journey a few years ago.  We were on a 30-day roundtrip jaunt to San Francisco that included a few nights in the Longhorn State.
I knew Texas was going to be hot then, and after one night in a motel in Wichita Falls, I was ready to rush on past Amarillo, head north toward northern New Mexico, knowing that with a rise in elevation, we would also face lower temperatures.
But, alas, wifey was reading a travel brochure and found something she thought would be interesting to visit -- Palo Duro Canyon State Park.
As we headed off the main road, I came to realize we wouldn't be in cooler temperatures in northern New Mexico that night.
We drove hither and yon to find Palo Duro.
As my wife can tell you, the higher the temperature, the less interest I have in anything,
And boy was the temperature hot that day. We drove and drove (I think my vehicles AC unit was on the skids which also added to our misery).
We finally found a road to turn off on and headed farther south. I was hoping that would be it, take a few looks and scoot farther north.
But no. While standing there, some other people came by and struck up a conversation. 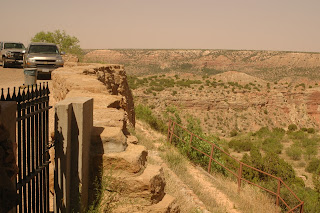 Come to find out, this wasn't the best part of the park. It was farther to the west.
I thought maybe we could just say thanks for letting us know and head on our way.
But no, they offered to let us follow them to the real park.
Of course, wifey was all enthused. Well, about an hour or so later we arrived there.

Yes, it was pretty. And yes, it was hot.
We made a visit to the "cool" visitors center and then decided to take the main road down into the park. After about a half-hour drive, we decided it was time to move on.
We did make it to New Mexico and spent the night in Tucumcari in a "cool" motel room.
Looking back, we didn't do right by Palo Duro. Maybe if it were the fall or early spring we could have enjoyed it more. But like I've said, interest declines when the temperature climbs.
Maybe next time.
Next post: Aug. 9, 2011
Posted by walter at 10:37 AM 1 comment: