Giant cycle, one of a kind 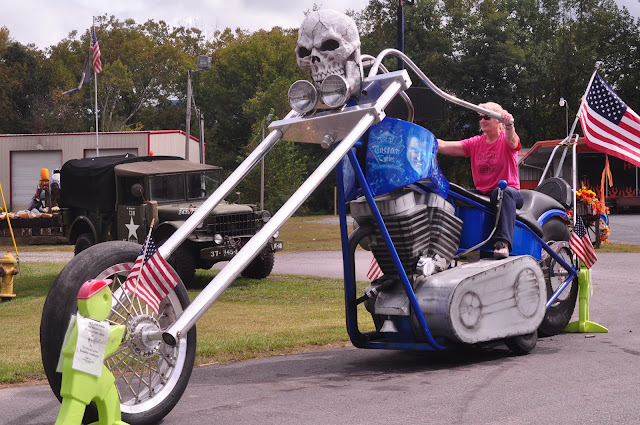 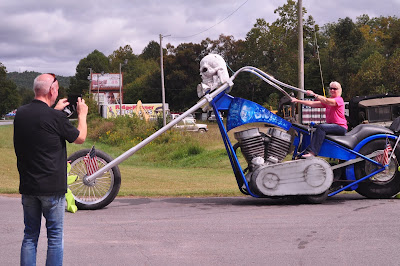 For a number of years now, on our trips to the Great Smoky Mountains, I’ve threatened to stop and shoot a picture at a motorcycle shop.

It is a business called Cherokee County Cycles located in Andrews, NC. We’ve passed the location numerous times but for some reason didn’t stop and snap that picture — a picture of a giant motorcycle. 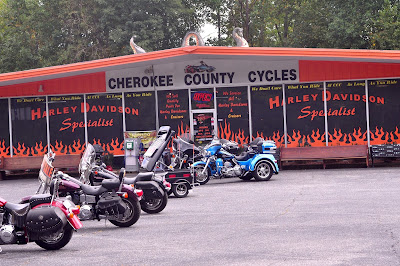 Well, this past week, on an abbreviated trip to the south side of the mountains with a stay in Robbinsville, I took that photo.

There were also a number of additional vehicles on location which others have also found interesting. 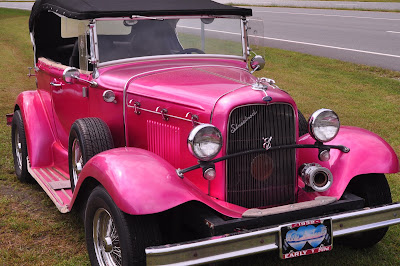 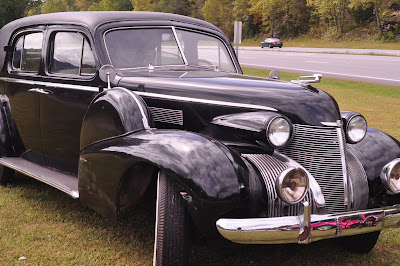 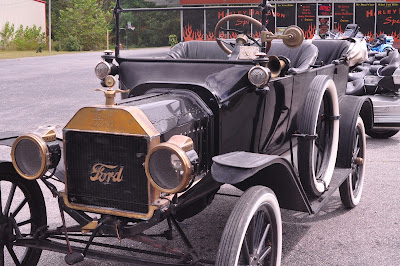 Andrews is located on Highway 19 and 129 just east of Murphy before one enters the Nantahala Gorge.

What, only 1 trip to mountains this year?

Nine months of 2015 are almost gone, and we’ve only traveled to the Great Smoky Mountains once this year.

Last year about this time, we had already been through the area four times and were readying for another trip, not to mention the sixth one we planned in order to see the Christmas parade in Gatlinburg the first week in December.

There was a big difference this year. We spent a lot of money on a Baltics Sea cruise on the Norwegian Star, which was very enjoyable.

Some of those trips last year had to do with family events and nothing to do with the mountains but since we were close, we worked them in.

We’re planning another foray into the mountains before taking on the care of four grandchildren while our oldest son and his wife celebrate their 20th wedding anniversary.

After this excursion, we’ll probably settle down back home since Thanksgiving and Christmas are on the horizon and there are a few other things going on.

Last year we didn’t attend many holiday festivities locally, but maybe this year we’ll get back over to New Orleans for the Miracle on Fulton Street, if it is still being promoted.

The Harrah’s Casino has been sponsoring the month-long event for a number of years.

We did that a couple years and really enjoyed the festivities and decorations.

Our only trip to the mountains this year so-far, in July, was great with a huge group showing up to have a good time. Maybe we'll get back to the six-trip agenda for the mountains next year.

Posted by walter at 3:54 PM No comments:

Let's have some chicken and then utfart 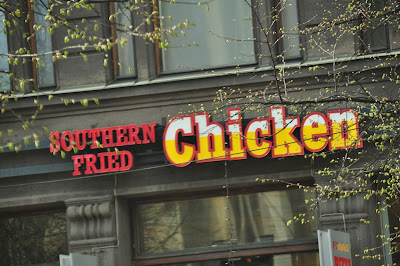 It doesn’t matter where I travel, I always keep an eye out for signs of all kinds that are different, or maybe make me feel like that I am perhaps close to home.

Such was the case on our Baltic Sea cruise earlier this year. 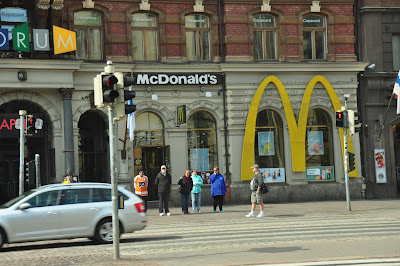 Hitting such countries such as Denmark, Germany, Estonia, Russia, Finland and Sweden, I knew that there would be some Americanization in at least one of those countries, and I was right.

We’ve seen such American companies all over other foreign countries which we have visited.

McDonald's is familiar in just about every country that we have visited. They are everywhere.

There are also places with similar names to back home such as Southern Fried Chicken, a sign I spotted in Helsinki, Finland. Back home its Kentucky Fried Chicken, and since I am from the South, I felt that was interesting. 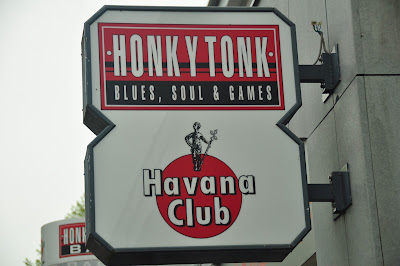 And we do usually visit such stores because we are familiar with the food and the prices. It’s like being “downhome.” 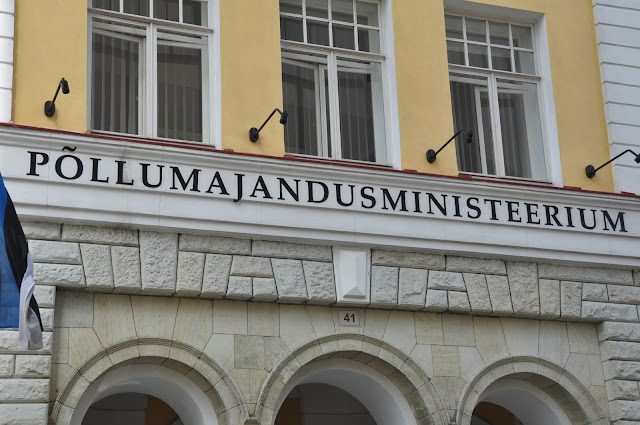 And then there are words spread on street signs or the sides of buildings which are strange, unusual, long or rather risqué because of the way the word may be used in our culture. 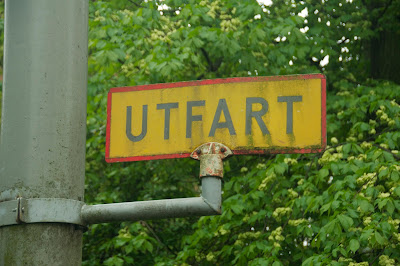 I decided to look up the definition of the above sign and found that it meant to exit a parking garage. I knew that in our language, there was some exiting involved.

Make use of those special photo features 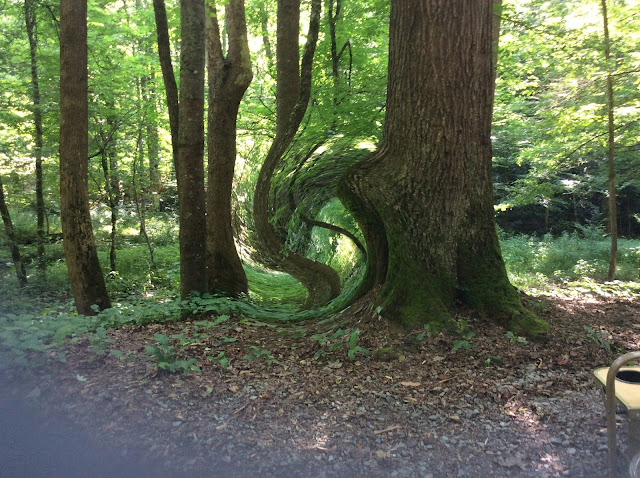 New technology can bring out the good in an individual, and perhaps it can also bring out a little bit of the devil.

It is up to the person.

I found a feature on my new Apple iPad (its always been there) and I played around a little bit on a trip to the Great Smoky Mountains.

When using some of the features, one can readily tell that the photo has been manipulated.

On others, the outcome can almost be believeable. 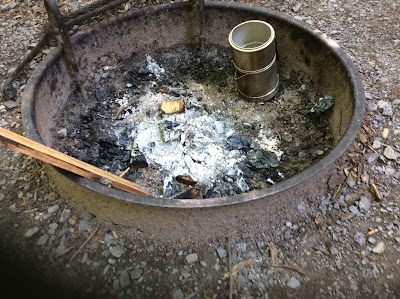 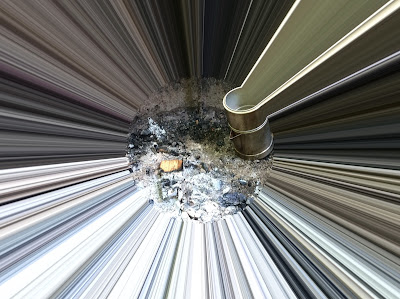 The photos included are just a sampling of what is available.

Those with such a feature should try it out sometime, if not for getting better photos, then maybe a laugh or two.

Posted by walter at 9:22 PM No comments:

Warnemunde, a colorful and leisurely port 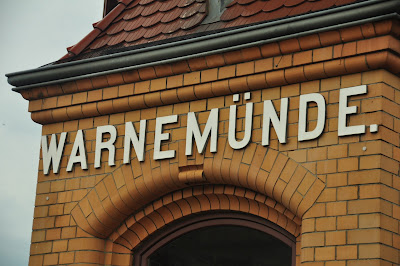 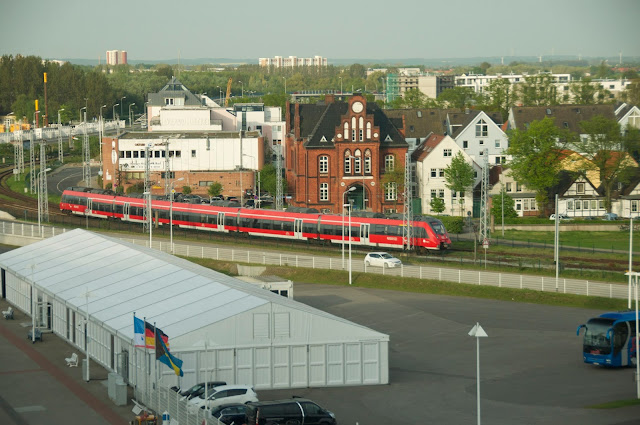 Warnemunde, Germany, a district in the city of Rostock, the first stop on our nine-day Baltic Sea cruise back in May, proved to be a pleasant and colorful stop. 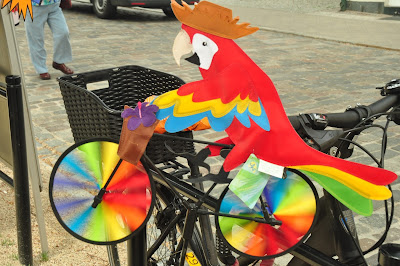 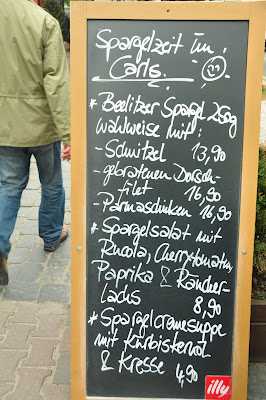 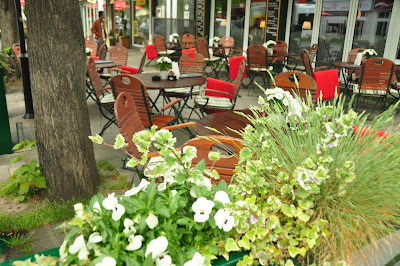 Not knowing exactly what we were going to encounter, my wife and I disembarked from the Norwegian Star on that Tuesday morning to find the small touristy town entertaining.

To get to the main downtown section only took about  a 15-minute walk along the waterfront to the small village that offered a wide variety of food and curios.

And we quickly found the “restroom” which was on the main street, although it did cost a little bit to use which wasn’t any big deal.

We usually don’t stay close to the ship so we meandered through the small downtown area observing churches, restaurants and clothing stores. 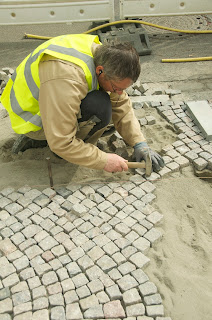 The word “cobblestone” to some conjures up a feeling of “romanticism," but that’s not the way I looked at it following our stop the next day.

But we did stop long enough in Warnemunde to watch a worker constructing a cobblestone street. The process was interesting and, as expected, it does take quite a bit of time to make everything fit and look nice. 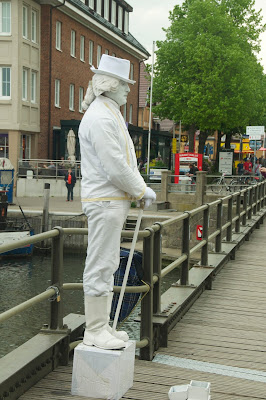 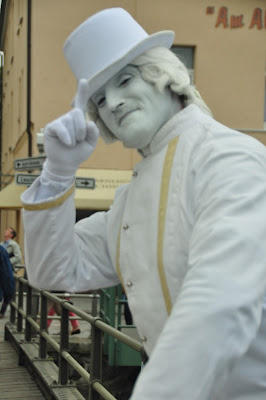 A street performer was hanging out on the bridge, dressed out in white, hoping for touristy tips, of which we did participate.

The town also serves as a railhead for those on cruises who want to visit Berlin. The trip from Warnemunde to Berlin takes about three hours and just as long getting back.

It was time we decided to spend in the city and around the waterfront. 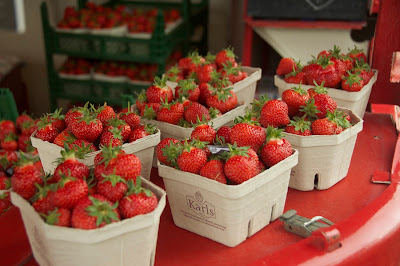 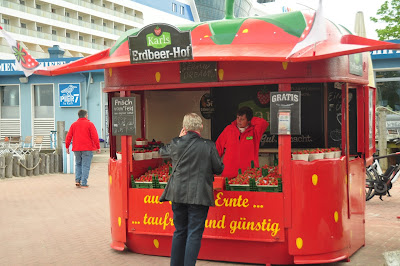 Upon getting off the ship we came across my wife’s favorite fruit — strawberries. There was a stand offering up the sweet treats. 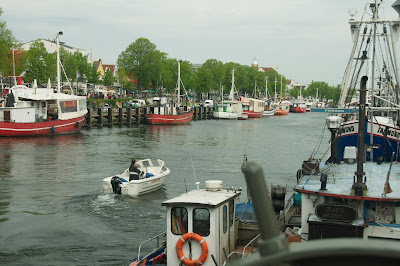 Because my wife is a stroke survivor and can’t cover much territory very fast, the seaside town offered the perfect outing.

Posted by walter at 9:21 PM No comments: