There’s nothing like spending such a night sitting around a fire that is situated inside a fire ring from the Elkmont campground in the Great Smoky Mountains.

My wife and I were joined in our north yard by my brother and sister and their spouses, all of whom have taken numerous trips to the national park.

The fire ring was a 50th anniversary gift to my wife and I by the aforementioned relatives.

We moved into our new house just over a year and a half ago, and because we like the mountains so much, we decided to construct a small stream in our yard and top out the look with a park fire ring.

There is a company that makes them, but with a little luck, our niece procured one on a trip earlier this year that she made to Gatlinburg.

Although there was a lot of back and forth concerning getting the fire ring, she was successful and it alll worked out. The fire ring was christened Halloween Night 2017.

We had chili, a staple on our trips, and of course s'mores.

Down here in south Mississippi, the day was clear and we were having a warming trend after a cold front had moved through a number of days earlier.

But as the sun went down, the air began to chill and the fire was all the more inviting.

We can’t get to the mountains as much as we would like, but with the manmade stream gurgling and the warmth of the fire, it was almost like being there. 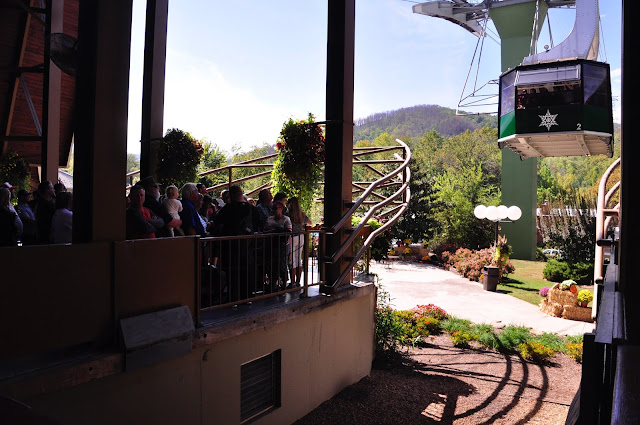 A recent aerial tram ride revealed a lot of the damage inflicted on the Gatlinburg, TN area from fires in the Great Smoky Mountains last year.

My wife and I took the conveyance from downtown Gatlinburg, TN up to Ober Gatlinburg, a popular tourist destination in all seasons of the year.

The view as we moved over the area helped one to easily see the vacant spots where houses once stood. It was also a good way to see how the fire moved through the mountains, causing heavy damage in some areas and skipping others.

Numerous trees stood tall, even though one could see they had been ravaged by the blaze. There was little, if any, life in them.

In an earlier trip, we drove through the area, but weren’t able to experience the damage like we could see from the air. 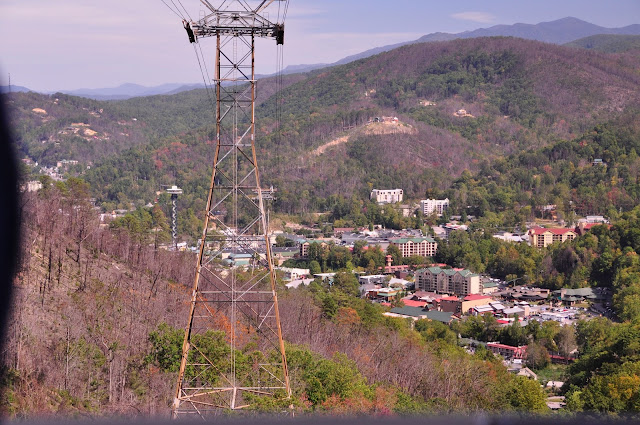 A couple years ago, we dined at a local Italian restaurant. The owner came over and talked to us prior to the meal, mentioning and pointing to his house high on the hill opposite the town. 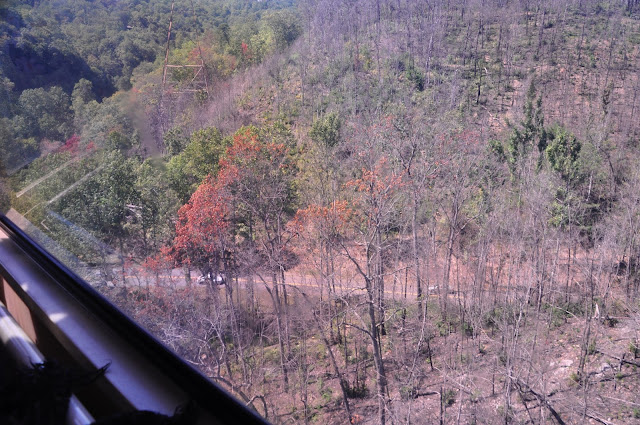 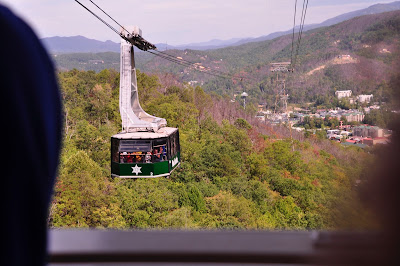 We didn't see him on our last trip, but where he had pointed to was a place that had suffered a lot of damage.

Posted by walter at 8:15 PM No comments:

"Sitting in a Greyhound station, with a ticket to my destination . . . . "

Simon and Garfunkel’s “Homeward Bound” lyrics (although it was a railway station) sum up the thinking for a lot of people in such a situation.

Just last week, for the first time since 1967, I found myself riding a Greyhound bus. The previous occasion was one ordered by the United States government. I was headed for basic training in the army.

The trip started in Hattiesburg, MS and ended in Fort Campbell, KY.

My more recent experience was at the end of a nine-day vacation.

We go camping in the Great Smoky Mountains National Park each year, and our 2000 Chevy van usually tows our popup camper on the some 1200-mile round trip.

But not this year. The van is showing its wear and earlier there seemed to be a problem with the transmission, so, not wanting to take a chance, we decided on another option.

That included renting a pickup truck with towing capabilities from Enterprise in a town about 65 miles away. That was the closest available location.

My brother took me over to get the truck on the first day of our vacation.

But returning the vehicle, I decided to not put anyone out and see how I could do this on my own.

So the morning after arriving back home, I headed in the pickup back to Mobile and made it in just a little over an hour and turned it in.

Earlier I had used Mapquest to find out where the Greyhound station was located, and heading back home the day before, we detoured to make sure it was there and operating.

I had to traverse some four miles of city that had a lot of sidewalks, but then, in some places, my journey appeared somewhat dangerous with vehicles whizzing by.

It took me about three hours to make the trek. I purchased my ticket for the ride to Biloxi where I would use the local transit system to get home.

Other than the fact that it was a 10-hour day, I felt that things went well, under the circumstances. A bit better planning and I probably could have made the round-tripper in about 5 hours.

The Greyhound ride was only about 68 miles and I slept about half the way.

It gets  a little getting use to, having to sit higher above the road and feel the sway of the bus. When awake, I kept an eye on the driver and found that he anticipated traffic issues and made adjustments for them in a safe manner.

I don’t know if I would like to travel a lot on such a bus, but having to this one time, I now know the local schedules and am prepared for a much better experience.

Posted by walter at 8:46 PM No comments:

We said goodbye to Nate and then hello

There’s nothing like a hurricane to diminish some of the fun of a vacation trip to the mountains.

That was the situation my wife and I encountered last week upon arriving at home.

We had been gone nine days to the Great Smoky Mountains National Park where we camped at Elkmont with one of our sons and four of our six grandchildren.

The days were clear and nights sleeping-bag cold. It was great.

For the duration, there wasn’t any rain. It seems like that is the first time we’ve ever been up there where we didn’t have any precipitation.

But we’ll get to the mountain trip in another post.

Our grandson Nate was with us in the mountains. And Hurricane Nate greeted us upon returning home.

We had a few days to figure things out to make sure we were prepared, although we always seem to have at least three days of food and water on hand and sufficient flashlights.

We moved into our new house last year, so this was the first time for it to experience a storm.

Although Hurricane Nate was a minimal Category 1, we decided to go to my sister’s house for the duration of the storm.

Arriving Saturday afternoon about 15 miles away and farther inland, we settled in.

The winds picked up that night, the storm surge did some damage near the Mississippi beach front and the power momentarily went off at our location, but that was it.

Upon returning home Sunday morning, we found a lot of sprigs in the yard from two towering oak trees.

That was about it.

The electricity had apparently gone off momentarily and there was no damage to our house. Great!

Posted by walter at 9:37 PM No comments: