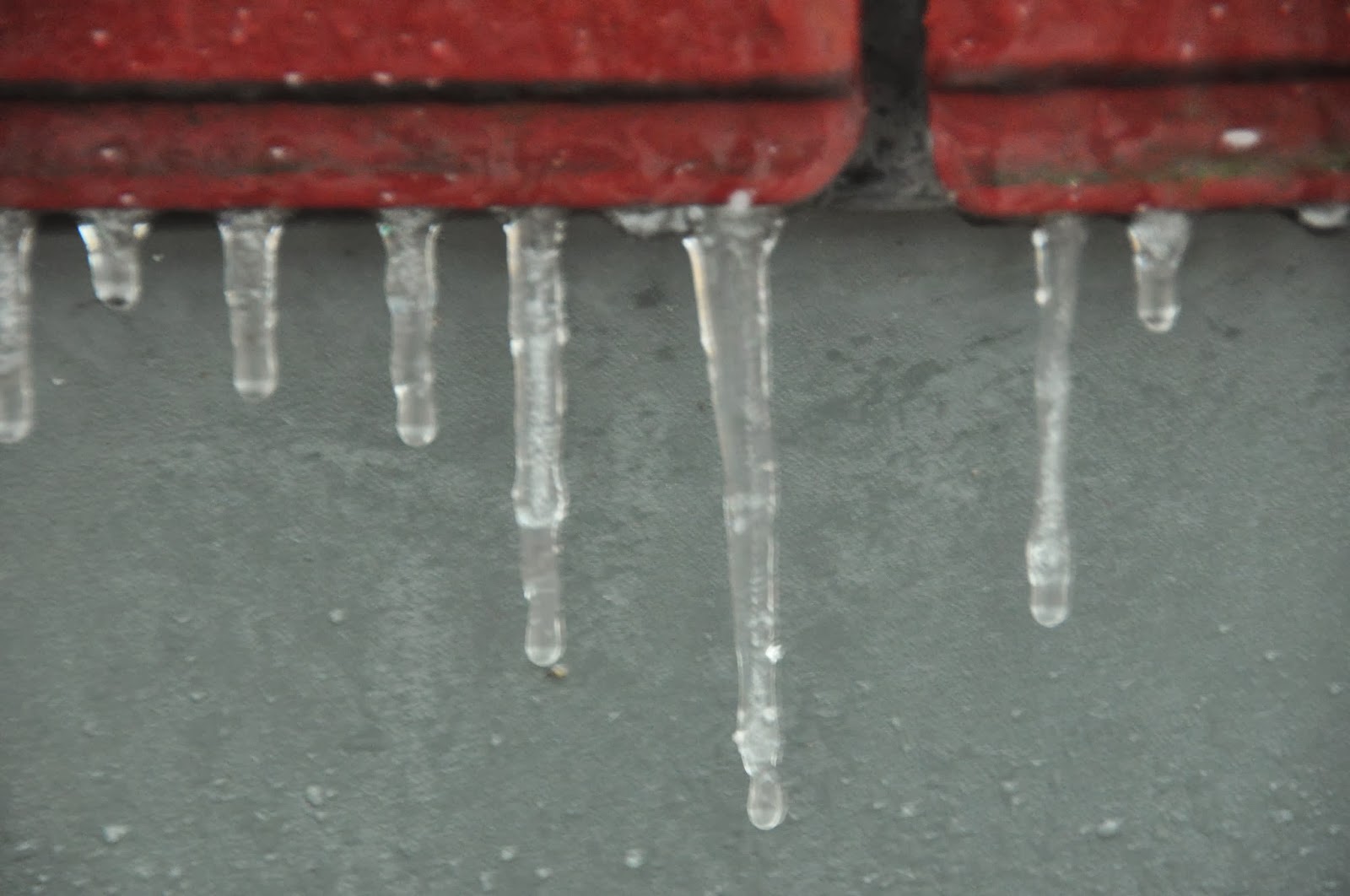 An ice storm is making its way through south Mississippi today (and also Louisiana, Alabama and into Georgia and the Carolinas). The temperature here tonight is expected to get down to 23 degrees with ice changing into snow sometime after midnight.

I've watch news stories of those living way farther north and seeing vehicles colliding on interstates and other roads. Other motorists lose traction on bridges and slide onto the shoulders of the roads. And I wonder, why do they get out and drive when they shouldn’t? Don’t they know it is dangerous? 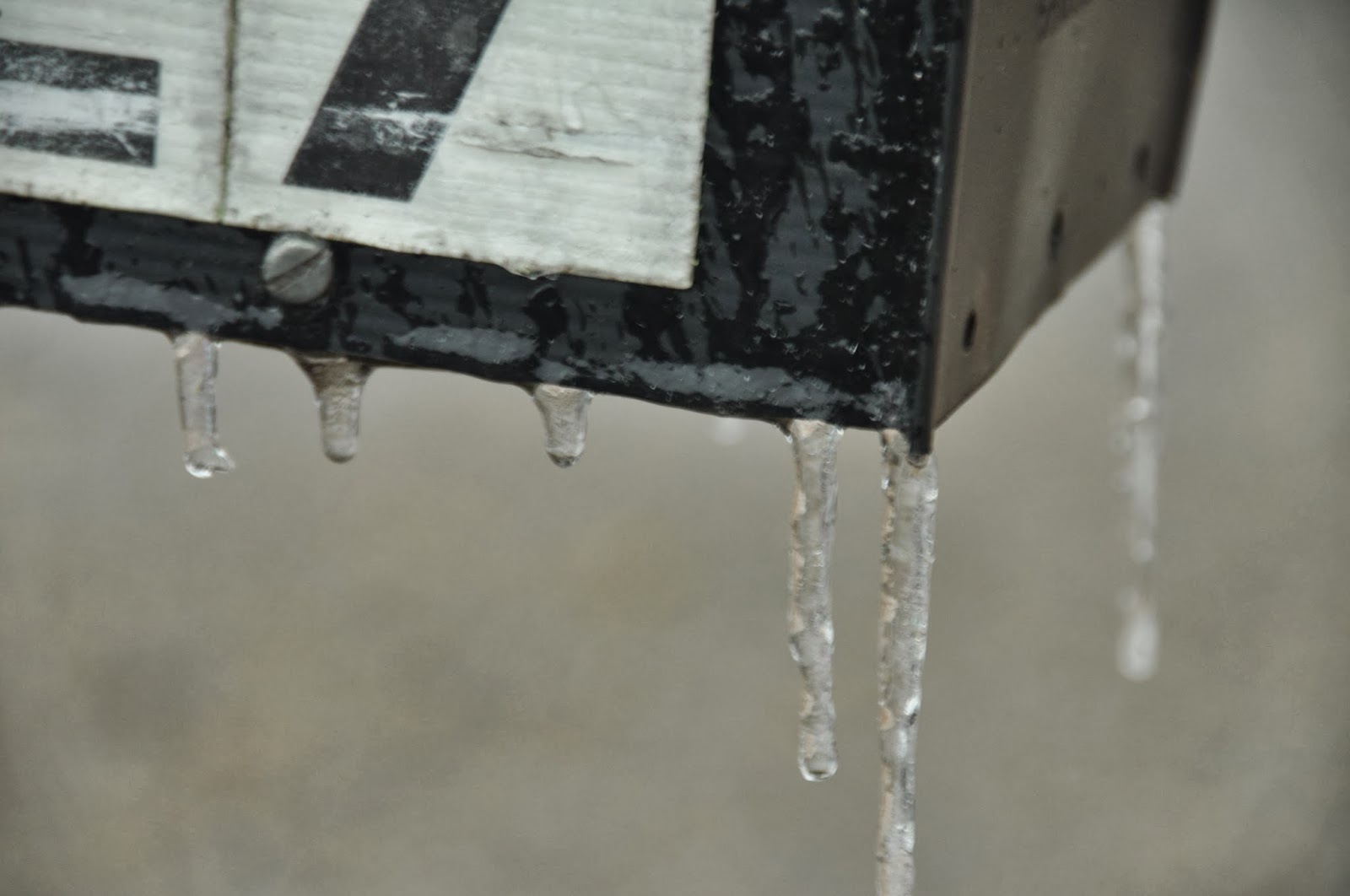 Well, we’re human. We think it won’t happen to us. But we do it anyway.

This afternoon, with icy rain falling, I told my wife I was going to Walmart, which is about three miles away.

Getting into our van, I could see icicles hanging from it. There were icicles on the mailbox and the trash container was covered with ice.

I was going anyway. 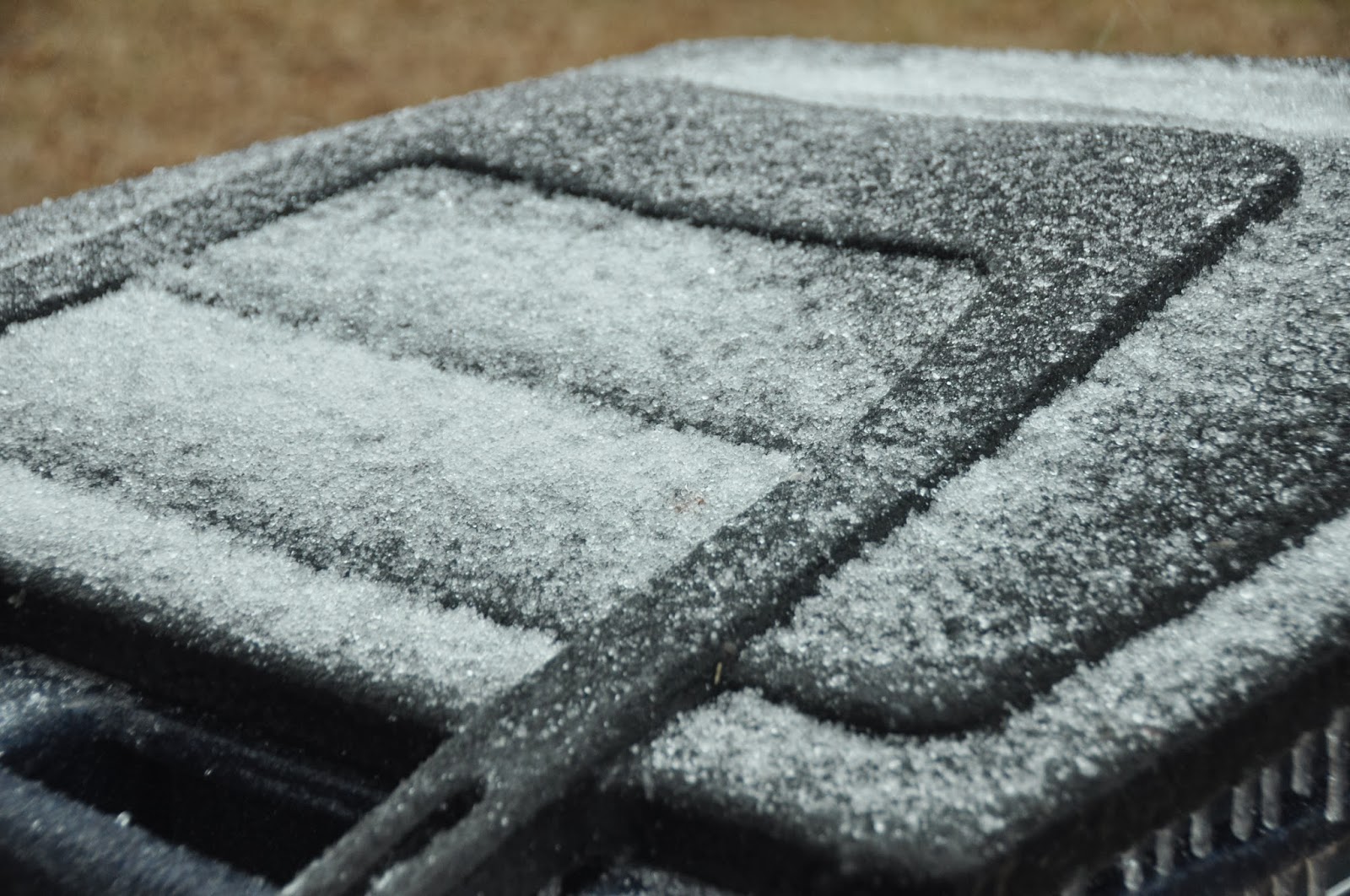 I headed out and upon reaching the first four-way intersection about three blocks away, I decided to to go back home. I went around a block and then I decided that the conditions weren’t quite bad enough to keep me from my destination.

Arriving back at the same intersection, I made another cutback through the parking area at a gas station on the corner, but then decided to head on.

The adventure wasn’t that adventurous. I was traveling about 35 mph on the main highway while others flew past me doing at least 50.

There weren’t many people at Walmart. I got a few non-essential items (bird and squirrel food) and headed back. I just wanted to get out of the house for  a little bit.

On the return, my thoughts were of what the conditions were going to be on the road the following morning. After a day and night of below freezing temperatures, freezing rain and then snow, it’s going to be dangerous.

Tomorrow, I guess I'll sleep in a little late, mosey around most of the day at home and watch the news to see how others fared.

Posted by walter at 5:06 PM No comments: 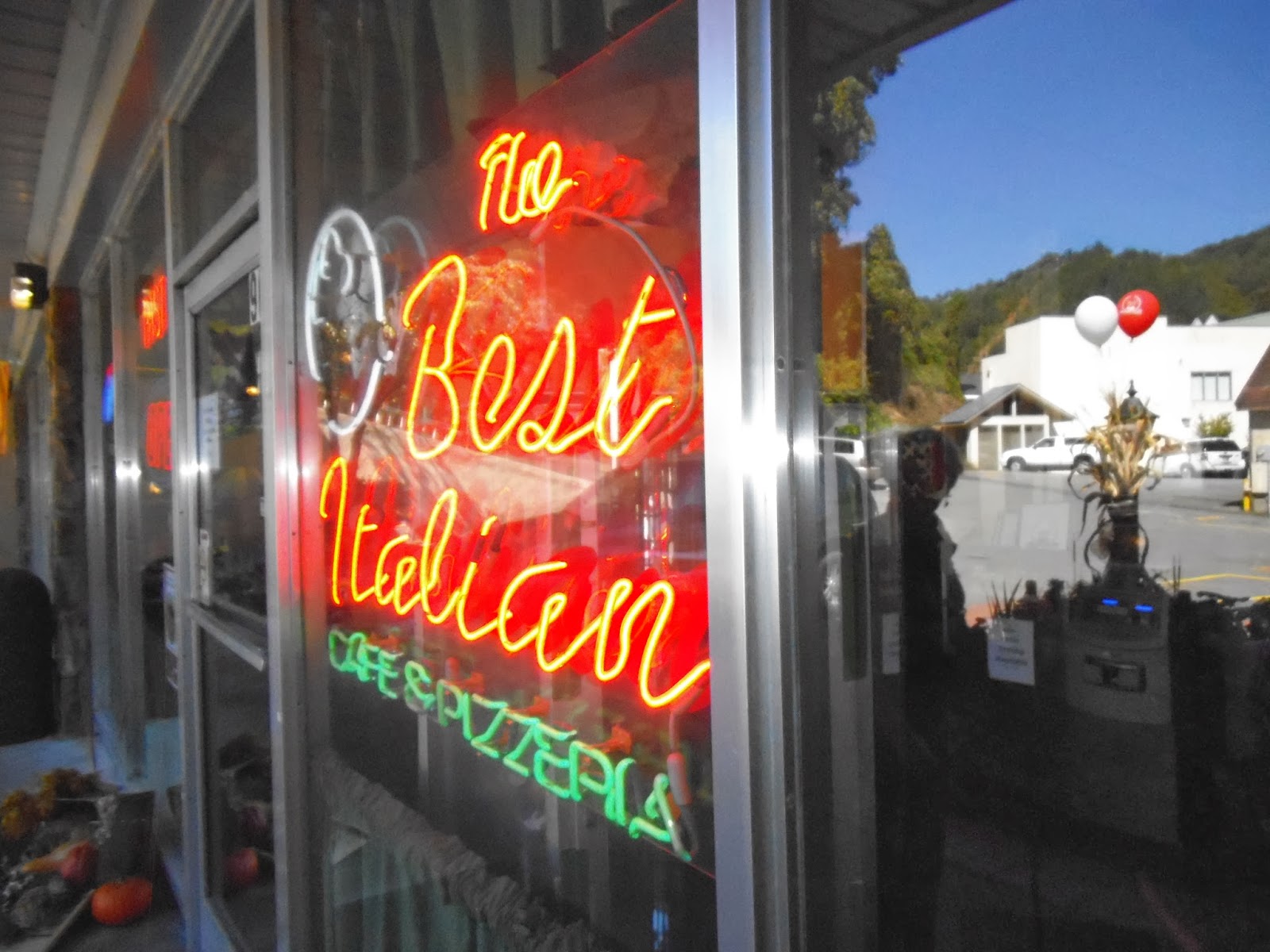 There are only two restaurants in Gatlinburg, TN that wifey and I have managed to make regular stops.

One is for breakfast, which is the Log Cabin Pancake House at 327 Historic Nature Trail.

Since we like to picnic for lunch at a location in the Great Smoky Mountains National Park, we don’t have a favorite for that time. 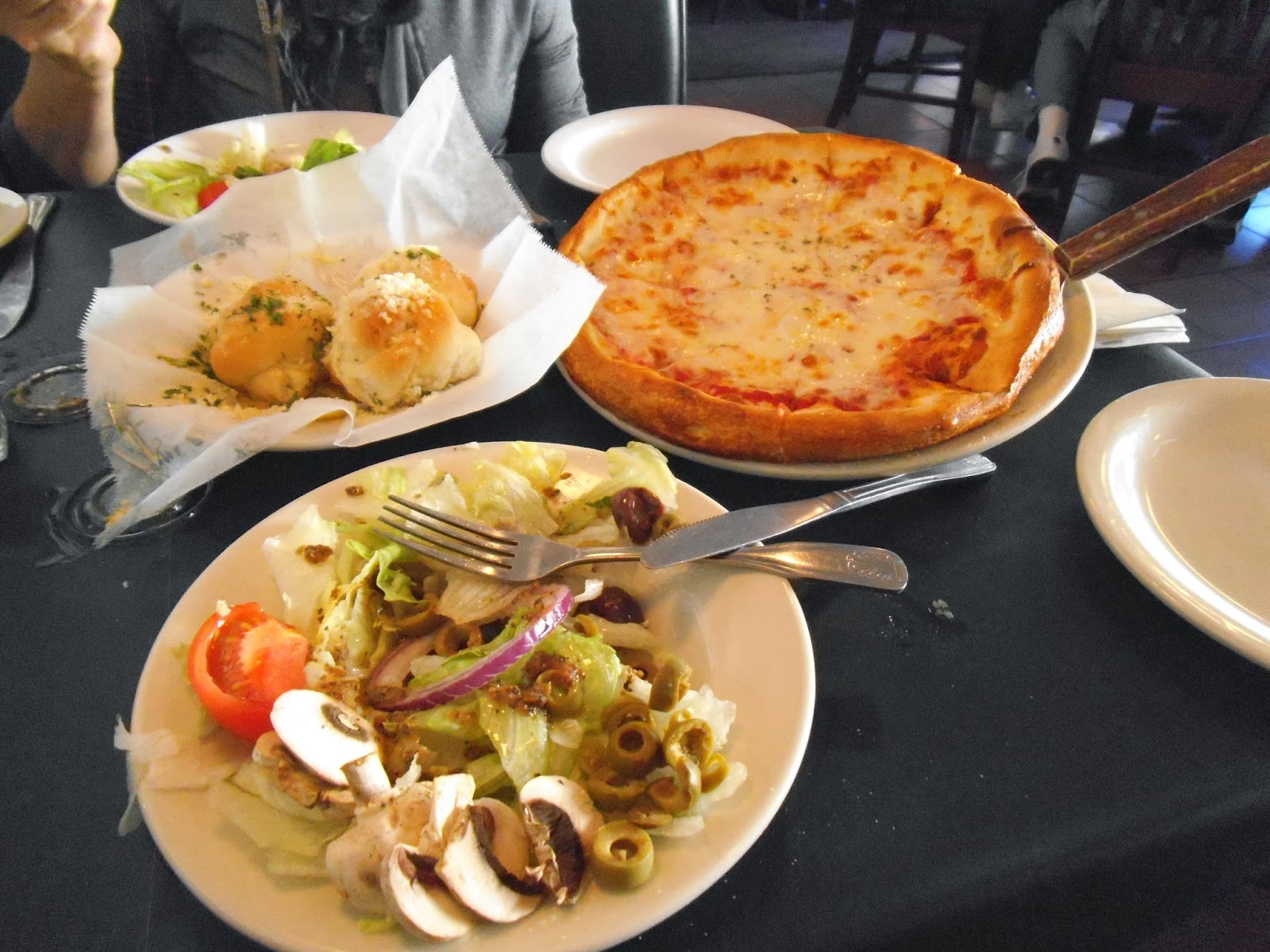 But for supper, we have more than once made it to the Best Italian Cafe and Pizzeria. They have two locations in the city, but the one we frequent is at Elks Plaza Shopping Center on the parkway between lights 8 and 9. Its on the east side of the road.

The other is located on the parkway between lights 6 and 8.

The first time we visited this location, about eight years ago, we must have been very hungry. We ordered salads and a large pizza.  We didn’t realize that they also provide a suitable amount of garlic rolls for consumption.

The rolls come out first and we quickly devoured them and wondered how we were going to eat the salad and all that pizza.  Well, we managed to down a good bit and packed up some of the pizza and took it with us.

We’ve since changed our ordering habits and now go with salads, but share a small pizza. With the garlic rolls thrown in, it's more than enough.

Matter of fact, I’m looking forward to our next foray to the area so we can chow down there once again.

Jumping off a mountain is not for me

Personally, I have a fear of heights.

The official moniker for such a condition is “acrophobia.”

But even so, in the past I have worked through this fear and trudged on to somewhat enjoy a number of locations.

My wife first found out about my condition when we were at a county fair in Tupelo, MS during out first year of marriage some 46 years ago.

She loved ferris wheels. And she thought I would too. Not!

It was the double wheel kind. And when the section we were on took its turn to make the highest elevation, she could see my knuckles turn white as I grasped anything I thought could save me.

Another occasion was at Six Flags Over Georgia on a ride that had a circular base about 20 or 30 feet across. Riders sat around the circumference of the thing-a-ma-jig as a crane picked it up, lifted it high into the air and repositioned it, slowly bringing it down to earth. She said she actually saw me turn green. And decided that was the last time she would try to entice me on such a ride.

And then there was the gondola at Masada in Israel. Myself and others held on to the pole in the middle of the car with our heads bowed, not looking out, as if we were in prayer. I think we were.

I also had such a feeling when looking out from the top of the Statue of Liberty.

But I don’t begrudge others for their joy in not having this malady.

On a return trip from the Great Smoky Mountains, we decided to go through Chattanooga and drive down the highway on Lookout Mountain.

We had made the trip previously and wondered if there would be those who jump off high places while strapped to their hang gliders. There were a number of them using the facilities at Lookout Mountain Hang Gliding.

We stopped for a while to watch the thrill-seekers zip across the sky, rising on the thermals and criss-crossing the area.

I can’t bring myself to do something like hang gliding (check out this video), although riding in an airplane does not have such as effect on me.

Looking out over the expanse of the mountains in the distance and the valley below, I wish I could do that, but that’s just not me.

Posted by walter at 7:31 PM No comments:

And what a beginning.

Take time to brew up a fresh cup of hot coffee and dream of places far away.

Down here in southern Mississippi, we’ve seen temperatures down in the teens which we realize are nothing compared to those residents farther north who have had to deal with sub-zero temperatures and not much higher during the daytime.

It appears that the temperatures will be changing later in the week and things will be looking “warmer”  for everyone.

But even so, with the beginning of a new year, it is time to make plans for new adventures and often a return to old favorites.

But that is the way life is.

We hope to be scheduling a cruise to go along with another trip to the East Coast for a June wedding and then another week back in the Great Smoky Mountains National Park during the summer.

Not much to say at this time since I am trying to thaw out.

Posted by walter at 8:48 PM No comments: