Yellowstone return seems to be getting closer

Yellowstone National Park is on my list of places to revisit.  Our first and only excursion to that part of the country was back in 1973.

We were on a 21-day, 7,000-mile, almost non-stop trip. It was September and the temperatures were relatively mild. We were traveling in our spartan long-wheel-base Chevy van.

I checked out Yellowstone just recently and the lows were hovering somewhere around or below zero.

That’s not my kind of temperature. I like the 50s and 60s. Although I do want to go there when snow is on the ground.

Our travels in 1973 took us to Dodge City, KS, over to Canon City, CO, up through Denver and then Rocky Mountain National Park.

Then it was up to Jackson Hole and Yellowstone for a couple nights, then Glacier National Park, the World’s Fair in Spokane before heading south into California.

We took the Coast road south of San Francisco all the way down to the Mexican border. Then it was a beeline for home along Interstate 10.

Those were the good ole days —  10- to12-hour days traveling (although not all days), and resting a day or two now and then at some interesting spot.

I don’t envision covering that much territory in such a short period of time now. Its more like moseying around, enjoying the scenery, and then when the sun starts heading down, scurrying to find a place to stay, whether a motel or campground. 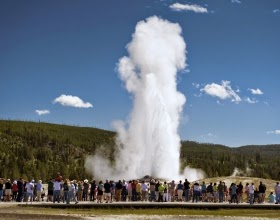 Even though Yellowstone is right at 2,000 miles from our home, it still beckons — the geysers, buffalo, bears, wolves — and yes, the snow. I would like to say I’m ready to go, but it looks at though its going to be a 2016 excursion, sometime after the winter storms have died down.