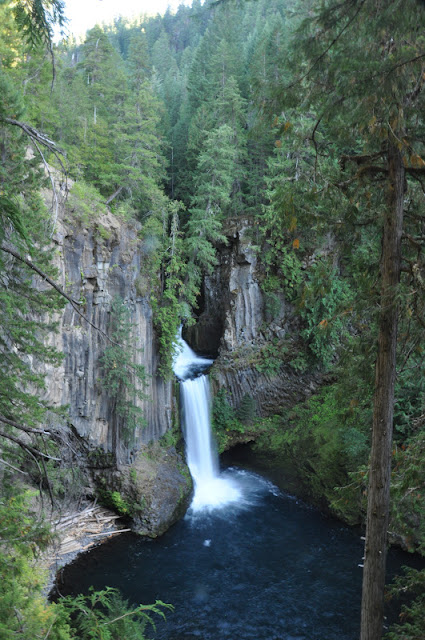 Is seeing a waterfall worth adding six hours of driving time to a vacation schedule?

And, yes of course. Especially if one is in new territory -- everything along the way is an adventure.

The second day of our October trip out west, we were originally planning on leaving Yreka, CA early on a Sunday morning and moseying over to Coos Bay, OR taking in a few sights along the way.

It was to be a leisurely four- or five-hour trip, not counting stops and we hoped to arrive in Coos Bay no later than about 5 or 6 p.m. 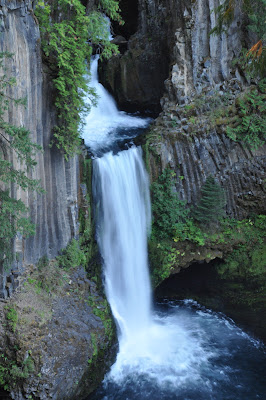 Well, those plans went out the window.

In perusing some Oregon travel brochures, I saw a picture of a waterfall  and just felt that since we were going to be in the area, I just had to go and see it -- it being Toketee Falls.

The area is part of the Rogue-Umpqua (rivers) Scenic Byway, a loop that winds its way for 172 miles through a beautiful mountainous and forested area.

We arrived at the waterfall about 4 in the afternoon, expecting the brochure describing the walk to the falls to be accurate. It wasn't. Expecting a short walk off the main parking area, we discovered the path to wind up and down, over and around.

The trail was rough in places and ran along the edge of the mountain which had a pretty good dropoff. There were rocks and trees to go around, steps to climb and descend. 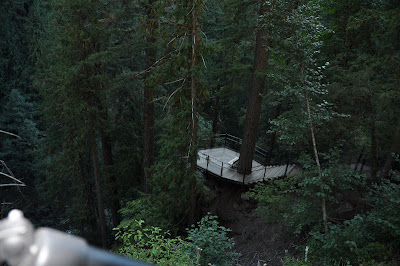 I worked up a pretty good sweat trying to make sure I arrived while there was still enough light.

The mission was accomplished and there was even a viewing platform from which to enjoy the falls.

I snapped away, enjoying another travel accomplishment.