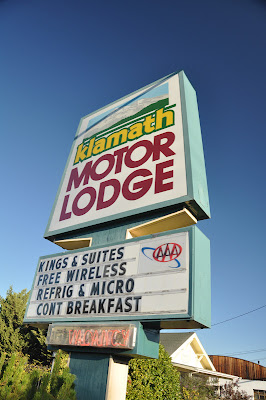 Our 8-night West Coast trip in early October had us staying in seven different lodging establishments.

For whatever reason, I guess I had heard of Coos Bay, OR, before, and so we decided to make it our northern terminus.

San Francisco was the arriving and departing point.

Upon checking out our rental car at Budget on the Saturday we arrived, I asked the agent what kind of mileage was allowed. He said it was unlimited. Upon returning the vehicle the next week, the check-in guy commented that I must have gone everywhere.

Not quite, but in those nine days, we logged just a little over 1,600 miles in that Toyota Corolla. And it did a good job, and got good mileage.


We were definitely on the go.

I had begun making reservations back in May, doing Internet searches and checking out old brochures we had picked up on previous trips.

Our first weekend on this trip included the Columbus Day holiday. I recalled another trip we took to California during that same timeframe years ago. We were heading down to see the Hearst Castle and couldn't find a room anywhere within about 100 miles of the place.

We ended up spending a somewhat unusual night sleeping in our vehicle at a state park. Since we are campers, we managed to easily adapt to the situation, although it wasn't as comfortable as our van. And not nearly as comfortable as a motel room would be.


It was a holiday weekend, the weather was great, there were a lot of activities going on and everybody seemed to be traveling. It was a lesson learned.

Based on this past information, and the fact that my wife likes to know where she is going to stay each night, I managed to book all of our accommodations before the end of July.  This was comforting. And since most had a cancellation policy, I could have changed plans if need be.

I made decisions, pulled the trigger and booked all those nights early. And I never did go back and change any although I felt some were above what we normally pay for a room.  But then again, we don't spend that many nights in a motel during the course of a year and when going to the mountains we camp for about $10 a night. 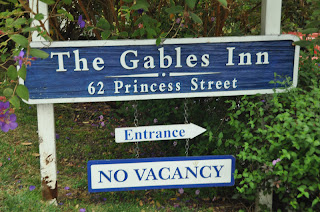 I seem to be entertaining that entitlement-to-something-better feeling although I am paying for the trip out of our own resources, not anyone else's.

Five nights were more or less having a place to stay while the other three were "experience" stays, one being the Coos Bay Manor bed and breakfast; The Tides Inn overlooking the Pacific Ocean in Shelter Cove and The Gables Inn, an upscale stop in Sausalito. (More on our 'experience stays' later.) 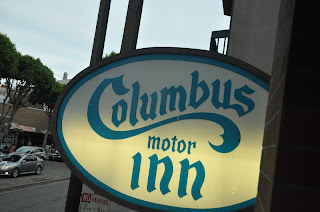 I'm ready to do it again, although I think adding an extra seven days, or more, would be better.