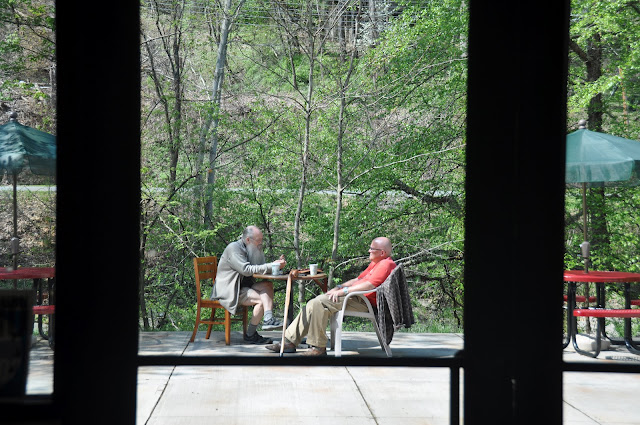 I really don't know what those two guys in the picture above were discussing.

But the situation seemed interesting. Just viewing the scene, and from past experiences, I can kind of see myself as one of them. I felt like I wanted to go over and join in their conversation. 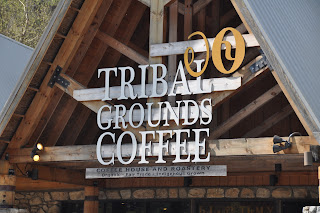 They appeared to be having an intense discussion outside a coffee house, Tribal Grounds, in Cherokee, NC.

We visit Tribal Grounds when passing through on our way to the Elkmont Campground on the Tennessee side and usually get a seat looking out the big picture window on the north side of the building. 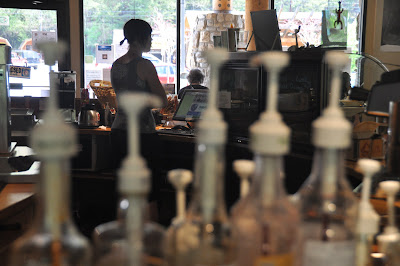 On this particular day, the  4th of April, 2012, the weather was great. The sky was sunny, the temperatures were cool and to add to the atmosphere, there was (well it's always been there) a stream (the Oconaluftee River) running along the back property line.

We sat inside to savor our drinks, but then I took my camera and headed out to shoot some pictures.

And the atmosphere out back just set up the feeling of something from way in the past.

Coffee houses, according to Wikipedia, "from a cultural standpoint . . . largely served as centers of social interaction; the coffeehouse provides social members with a place to congregate, talk, write, read, entertain one another, or pass the time, whether individually  or in small groups of 2 or 3."

The first coffee house was opened in Istanbul, Turkey in 1555 A.D.

Early on they apparently became a place of political gatherings and were banned.

Nevertheless, they have survived over the centuries and still provide a spot for lighthearted discussion, and probably in some cases, revolutionary rhetoric.

In some places in Europe, women were actually banned from coffee houses.

But that's not the case in today's world. Coffee shops find the more customers they have, male or female, makes it merrier for not only the people visiting but also for their bottom line.