Skiing is sweet on Sugar Mountain

We arrived in Boone, NC around 5 p.m. March 6 to ski the next day at Sugar Mountain.
We have traveled to the area about five or six times over the past 15 or 20 years.
On occasion we went right before Christmas. On others is was during the President's Day weekend and now we look to go when school is out for Mardi Gras on the Mississippi Gulf Coast.
Last year, Mardi Gras was a little earlier.  We didn't manage the trip then for whatever reason.
This year Mardi Gras was a little later. Using the holidays in our area is good, but when they come later in the year, the snow  on the mountains some 600 miles away begins melting. 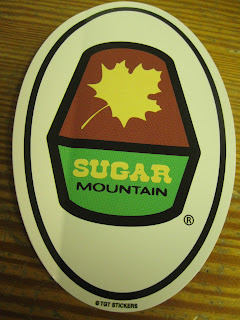 But then again when this happens, with the skiing season winding down, the businesses reduce their prices, which is good.
We were wondering how it would be this year. I had kept on top of the weather reports. Rain was in the mix for the week leading up to our arrival.
Some of the weather websites were reporting rain through Sunday afternoon and hinting of snow on Sunday night.
They were right.
Light snow  began to fall as we arrived in Boone. Upon arriving at the ski lodge the next morning, we were told that they had had about four inches.
All in all, the weather turned out to be perfect for the day. Skies cleared, the sun came out and with the overnight snow, the hillsides and trees were all white.
It was a true winter wonderland.
Crowds were sparse for the morning. The first two hours ( 9 to 11) I did five trips each on Easy Street, the beginner slope.
Wifey started out on what could be called the extreme beginners slope. We joined up for a number of trips down Easy Street.
I would sometimes branch off on the "Little Nell" run. The first two or three times, this was great, but with the sun beginning to beat down, this trail began developing a number of bare spots.
Wifey skied one run after lunch. I managed to stay on the slopes until 3 p.m.
Mostly during this time I took a different lift and got off to ski the Easy Street extention on the right, or worked back to the left of the lift on the main run down the major hill.
I didn't make it to the top of the mountain as I had done in the past. Maybe if someone else had challenged me, that would have happened.
Maybe next year. I'll only be 67 then.

(Note: Wifey took all of these pictures because of a camera malfunction with my equipment)
Next post: Tuesday, March 15, 2011
Posted by walter at 3:57 PM