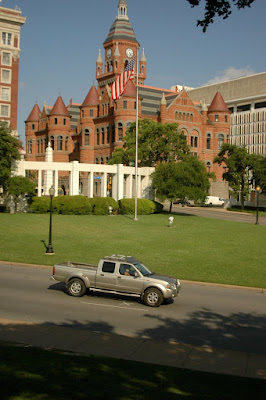 Movie director Oliver Stone's "JFK" movie was on TV this past weekend. It was the first time that I took time to watch it in its entirety.


I was in my second year at the University of Southern Mississippi in Hattiesburg that fateful Friday, Nov. 22, 1963, when President Kennedy was assassinated. 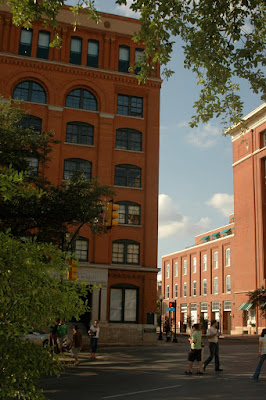 School Book Depository (left) from where Lee
Harvey Oswald took the fatal shots
The day wasn't that unusual, until that afternoon. I was walking to the journalism department when I heard the news.
There may have been some disparaging remarks about the president, I don't know. After all, the previous year, Kennedy was in office when James Meredith integrated the University of Mississippi. 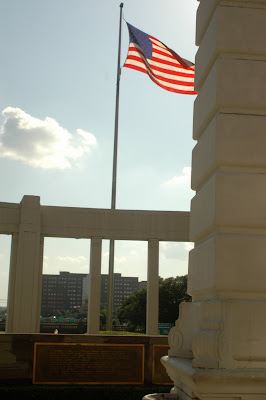 Flag flies over Dealey Plaza
Kennedy had federalized the Mississippi National Guard and placed them on the Ole Miss campus to help clear the way for the African-American's admission.
That being said, the one remark I remember the most was "I'm glad it (Kennedy's assassination) didn't happen in Mississippi."
More than 45 years later I finally visited Dealy Plaza, the location of the unspeakable. My wife and I spent some time on a Sunday afternoon in the plaza. 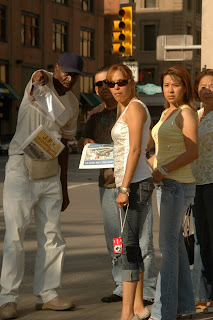 We easily found a spot to park about two blocks away. On that hot day in June, there weren't many tourists about, but there were some.
The plaza is in Dallas City Park and is named for George Bannerman Dealey, an early publisher of the Dallas Morning News and a civic leader.
There are marks on the road (Elm Street) denoting the spot where the shots hit Kennedy.
Reports indicate that, annually, more than 300,000 people still visit the Sixth Floor Museum that now occupies the top two floors of the former book depository. The building is where Lee Harvey Oswald is reported to have fired the shots that killed the president.
Throughout the plaza, there are entrepreneurs who promote walking tours. Others talk of conspiracy theories with sales of videos and other memorabilia.
Who really killed JFK? Lee Harvey Oswald, of course, unless you believe it was the CIA, the military-industrial complex or the Mafia.
Conspiracy theories abound. They always will.
Next post: August 8, 2010 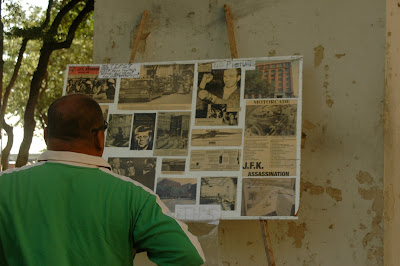