Traveling back in time through music

Boston skyline
Oftentimes I take a trip without leaving my house -- or the coffee shop I frequent here in Ocean Springs, MS.
I turn on my computer, plug in the earphones and make my way to You-Tube.
I have always found the song I was searching for. And finding one song leads to another. And thus, I take a trip in my mind mingling songs with the reality in my life.
I love the opening guitar chord (and the song too) to "Please Come to Boston" by Dave Loggins.
Boston was part of an itinerary back in 1977 when my wife Linda and I quit our jobs, packed up our five-year-old son and hit the road in a van to see a large part of the US.
We enjoyed the historic sites and beautiful scenery from Patti Page's "Old Cape Cod" all the way up to Mt. Desert Island and Bar Harbor, ME. 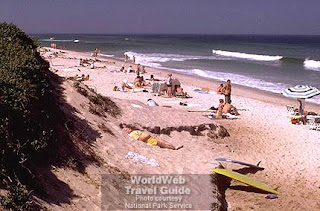 Beach at Cape Cod
Also on that trip we came into contact with the "Country Roads" of West Virginia so aptly described in the song by John Denver.
Another time, while traveling along the Great Lakes from Detroit and in to Canada and over to Niagara Falls, I couldn't get Gordon Lightfoot's "The Wreck of the Edmund Fitzgerald" off my mind.
Although the boat and its crew of 29 went down in Lake Superior, there were similar boats we saw in the area to remind us the place in commerce that such boats and men played.
On another trip, as Linda went into the visitors center at a west Texas town, over the speakers outside, I could hear the refrains from one of my favorite country singers, Marty Robbins, God rest his soul, with his "El Paso."

El Paso
Its said you can't go back, but I would love to return to El Paso and find the campground where we stayed that time.
I don't remember the name or the location. We found it by accident, but what a great discovery. We pulled off a main thoroughfare and drove to where we could park our van in the rear.
The campground was secluded with a brick wall all around it. The restroom facilities, as well as I can remember, were the best ever.
Clean, shining with inlaid tile throughout. Never have experienced such facilities since.
We didn't become acquainted with the rock band the Eagles music on a "dark desert highway" but it was on a desert highway, heading into Death Valley.
Along the side of the road with their thumbs stuck out (back then,1978, hitch-hiking was perhaps safer) was a Canadian couple -- David and Penny with their huge backpacks.

Death Valley National Monument
We decided to pick them up and they traveled with us for the following two days camping and visiting the sites in the area.
They were on the very beginning of what turned into an extreme odyssey -- a working trip around the world.
Years later we received word about their itinerary and its completion with their return to Canada.
They were fans of the Eagles and thought the cover shot of the "Hotel Calfornia"  album was taken at the Furnace Creek Hotel in Death Valley. It wasn't. The photo is of the Beverly Hills Hotel.
It was interesting though, thinking it might have been.
In 1973, on our first trip out West as a family, we covered some 7,000 miles in three weeks.
Heading south out of Marin County in California, we crossed the Golden Gate Bridge and I found out what Tony Bennet was singing about. 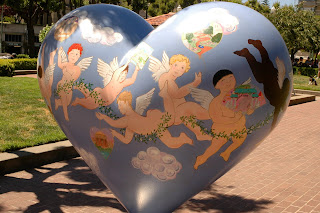 During the past 37 years I've returned to the City by The Bay at least 15 times. The journeys will continue. The hunt to find where "I Left My Heart in San Francisco" is so delightful.
These are just a few of the songs that rekindle memories of places visited and adventures enjoyed.
(Note: Except for the San Francisco heart, all photos were taken from internet sites)