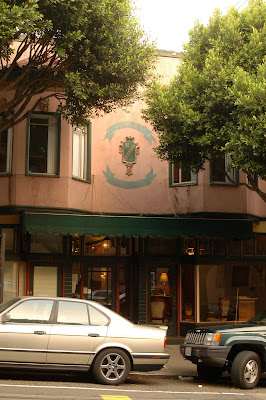 (This story was written a number of years ago following a trip to the City by the Bay. The facility has since been put up for sale. The post is long. Please hang in there.)

San Francisco -- Where to stay in the City by the Bay?
Lodging was the big issue (isn't it always) for my wife Linda and I on a visit to the West Coast. We wanted something different, something unusual. 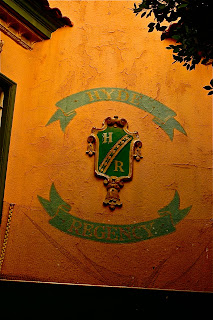 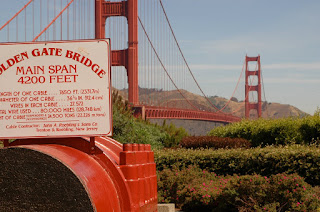 (This was not the view from our hotel room)
And there in the distance, far, far away, across roof tops through tree branches and over gardens below, was the Golden Gate Bridge, although only a portion of the southern half could be seen.
During the course of the week we secured a microwave from management (all we did with it was pop popcorn). On a stroll down the street I went into a local cleaners and offered to purchase some clothes hangers. The clerk went into the back room and came out with more than 20 which she just gave me. At a local hardware store we bought an electric pot (billed as heating water faster than a microwave) for tea and coffee.
We managed to have fresh towels delivered almost when needed (they said they were trying to find a new housekeeper).
The Nook, across the street on the corner, was a comfortable spot for breakfast (where we ate three times) and was open early and late and offered wireless internet.
True to the hotel's website information, the Hyde Street cable car route passed right outside the front door. We caught it coming and going. The city's bus service, of which we made use, also had routes nearby. 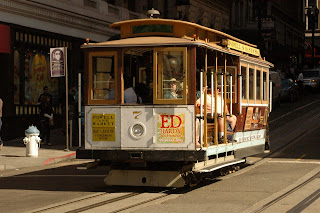 My wife and I love to ride the cable cars
The location and local amenities (including a nearby grocery store) of the area helped sooth the rough edges. For that week, our Hyde Street room became home. It became comfortable. A place to enjoy after a a busy day -- to rest, relax and make plans for the next day.
All too quickly the week was over, the days having run together through a variety of activities that got up up early and kept us out late.
And then it was time to leave.
I placed the keys on the table by the window and took one last look at the Golden Gate Bridge through the early morning fog. We slowly closed the door and heard the clicking sound of the lock that told us it was over.
The room wasn't what we had expected.
But the experience turned out to be much more.
As the Eagles so succinctly sang in "Hotel California," "You can check out anytime you like, but you can never leave."
Next post: Sunday, July 11, 2010
Posted by walter at 3:31 PM