At least somebody was enjoying Paris

It’s been about 15 years, but the memories linger of the food, Eiffel Tower, the Champs-Elysse, the Seine River, Arc de Triumph, the Louvre museum and Notre Dame among others.

And this week it was more disheartening because while we were outside of Paris and taking care of four of our grandchildren in Georgia, their parents were off on their 20th anniversary observance.

And where did they go? — Paris, of course.

Our Georgia daughter-in-law had been taking French lessons and they visited a family for a meal and conversation in the native language.

She said, although it was quite interesting, it would take a bit more time to really pick up on the language.  The words just seemed to fly by her, although she said as their 10-day oddesy came to a close, she was picking up more of the language as they traversed the city.

And back home, the grandchildren were involved in school, football, dance and getting ready for Halloween. And it was our responsibility to see that they got to the appropriate place at the appropriate time each day.

One of our offspring is driven to create, and she can’t seem to slow down, whether its making artistic items for her room, performing ballet or preparing for one of the more scary times of the year.

She managed to make a small play dough critter and fed it to the guardian of the candy bowl (picture above). 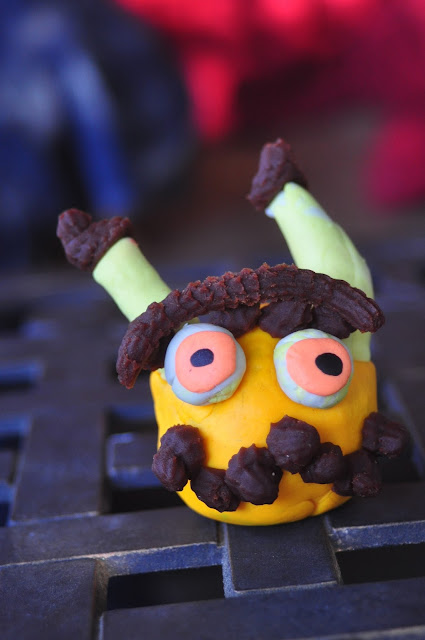 Another character came about because she was encouraged to make a play dough face.

All in all, their parents' trip was great, and our stay with the four “grands” was interesting and quite enjoyable.