Camping and a lot of mountain history 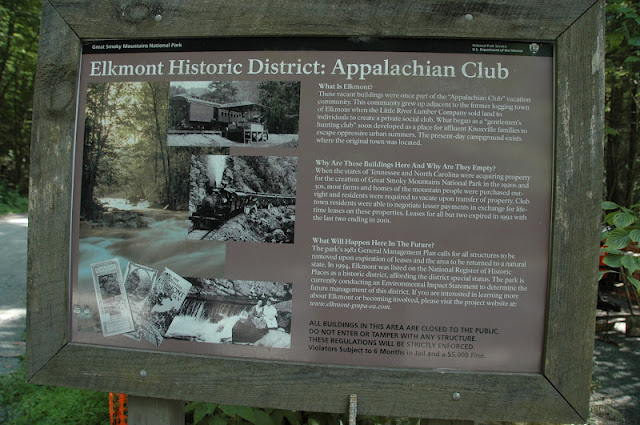 There's also a lot of history.

The area was host to a robust lumbering industry. And then, savvy entrepreneurs turned it into a tourist mecca which offered a hotel and the development of a mountain community. A graveyard also adds its part.

Years ago, something like 15 or so, upon ending our camping experience, we would trek up to the Wonderland Hotel on the north end of the campground that last morning and have breakfast. It was a pleasant experience. The food was good and we got to look at the facility which, over the years, offered lodging to thousands and a respite to the everyday world.

Because of "back-to-nature" plans in the national park in 1992, the hotel doesn't exist anymore.

On the southern end of Elkmont, members of the Appalachian Club had built numerous dwellings which they inhabited over the years. The well-to-do from Knoxville, who had owned the land, were given lifetime leases on their property upon establishment of the national park.

But that was changed. Leases were extended for 20 years in 1952 and again in 1971, but were not renewed in 1992.  At that time, plans were formulated to remove the structures and let nature take its course.

There were more than 18 cottages in the area, some listed on the National Register of Historic Places. That designation led to a debate over the fate of the structures. The debate lasted 15 years.

Now the move is underway to restore some of the cottages and outbuildings. The Appalachian Clubhouse has already been renovated and is being offered for social events. There is plenty of parking along with flush toilets and running water.

I have had mixed feelings about all that has transpired. On the one hand, it would be nice to have the area totally returned to its natural habitat. But in today's world, that is not that realistic.

There is also the historic aspect of the myriad of things that took place in the park over the years not related to nature, but to people.

I have walked along the Little River wondering what it would be like to have been able to live in one of the cabins abutting the river and listening to the rustling of the water 24 hours a day. I think it would have been great.

Our family has spent a lot of time in the river, mostly tubing and just having fun, although it is always quite cold.

I know it must have been difficult for those families who had a 50-or-more-year history of owning the dwellings, to give up such an idyllic setting.

I know it would have been hard for me.

Renovation is under way and a small part of history is being maintained.

Time marches on --- and it is not always in a direction to our liking.