Straying from the food standard -- almost 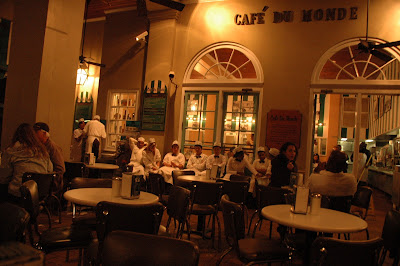 During our Christmas trip to the Big Easy we managed to avoid restaurants we usually visit.
It was sort of by design that this happened. We just wanted to experience new places. 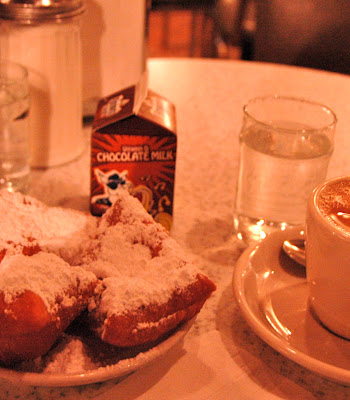 That is, of course, except Cafe du Monde where we have to have our traditional beignets and cafe au lait at least once, but this time we made a second visit. Wife Linda prefers milk instead of coffee (when tea is not available).
Cafe Pontalba is usually on our list. It is located on Jackson Square. Easy to get to, with big French doors opening (during mild weather) onto the activities of the French Quarter.
On our previous trip we stopped at Central Grocery for a muffaletta. Linda can handle only so much salt in her diet. But the sandwiches are good. And there is usually a wait in line.
We usually work these in when it is just a daytrip. This time we spent two nights and added new places. 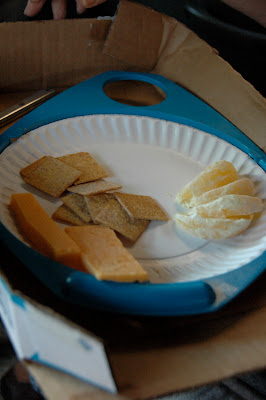 Our first luncheon meal upon arrival ended up being in our van outside a coffee shop that didn't offer anything in which we were interested.
We almost always bring along some food just in case we get stuck in a time-food conundrum. We looked in our cooler and made a meal out of some cheese, crackers and orange slices. 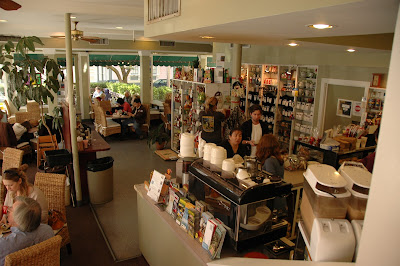 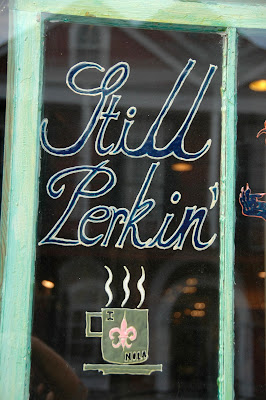 Between an excursion through the Garden District and Lafayette Cemetery No. 2, we did go in to the Still Perkin' for a latte and hot tea (pictured above).
The next day, we had a lunchtime treat on the St. Charles street-car line. We rode from downtown all the way out to the terminus. On the way back, we hopped off upon spotting a fairly nice looking place to eat. But upon our walking in, the music was just too loud for us. 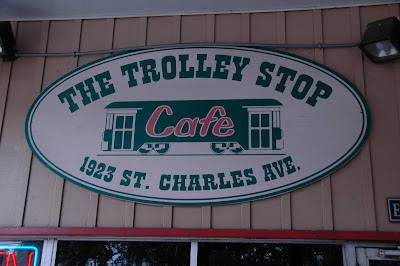 Across the street, there was The Trolley Stop Cafe. It didn't look as upscale, appeared to be in the midst of a police action, but what the heck. We're former newspaper people, sometimes still wanting to see what's happening.
What was happening was the fact that this was a popular place, even with the police. They were all over the place, coming and going. The uniformed guys and gals weren't the "Food Police" either.
There was a big dining area with lots of regular people enjoying the options.
We split another sandwich, this time a po-boy style bun with lots of barbecue beef on it, along with our standard French fries. 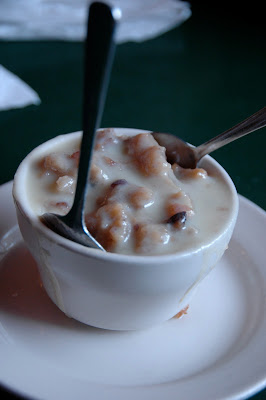 Wifey wanted to peruse the menu for deserts. The bread pudding sounded good, and tasted even better.
Looking for places at night we came across Mosperos on Decatur. The next night it was Rotolo's on Bourbon. At Mosperos (sorry, no photos) we directed our waitress' gaze to a customer that had a somewhat large sandwich.
"Are all sandwiches that big?" The answer was in the affirmative, so we decided to split a hot roast beef and some fries.
The next night we didn't want sandwiches. We wanted pizza. A restaurant hawker standing on the sidewalk of a Bourbon Street establishment didn't get our business, but he directed us down the street. 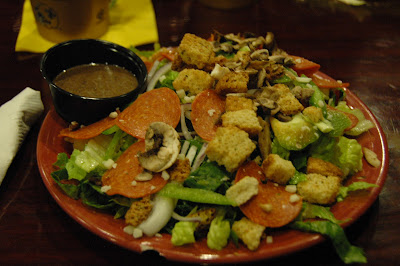 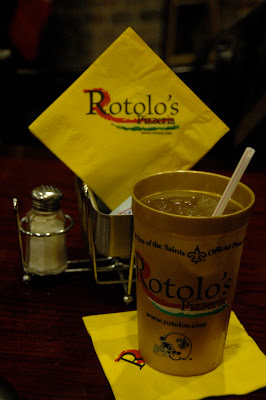 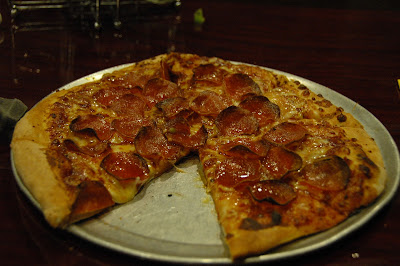 Coke, salads and pizza. So satisfying at Rotolo's.
The hotel in which we stayed had a daily continental breakfast consisting of bagels, toast, boiled eggs, along with some sweet pastries not to mention coffee, tea, milk and orange juice. So we always had breakfast there.
We'll continue with a few odds and ends and tibbits about New Orleans next week.
Next post: Tuesday, January 18, 2011
Posted by walter at 10:43 AM