Savannah -- a trip into history and music


I became acquainted with the songs of Johnny Mercer (bust pictured below) in the early 1960s. I enjoyed his work, but I didn't know he had written them.
What is wider than a mile?
What will we be crossing in style?
"Moon River" of course. 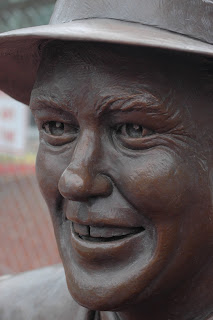 "Breakfast at Tiffany's" was quirky. But the music and actress Audrey Hepburn have bounced around in my head for a long time.
After all these years I do have trouble watching the
movie. Following the typing of the previous sentence, I went on the Internet to find out what year the movie debuted. It was 1961.
I then went to U-Tube and searched for "Moon River." There was the music, and Audrey Hepburn in front of Tiffany's in the opening scene. My anxiety attack began. I had to turn it off.
"Moon River" is one of my favorite songs.

But the movie is also a time machine  that reminds me too much of how fast life can really fly by. 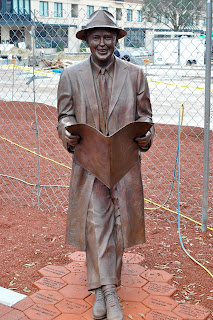 The year was 1962. The location was Hattiesburg, MS. There wasn't much going on that Friday night. Across Hardy Street from the University of Southern Mississippi was a theatre. The aforementioned movie was playing.
Truman Capote, of course, had to travel in an unusual circle of people to come up with the characters in the movie. A couple friends from the journalism department joined me. I'll always remember the rain. The rain, that is, that was falling outside upon leaving the theatre.  It help to cement the moment in my mind.

But that was then.
During the past year my wife and I planned a trip to Savannah, Ga. We had read the book and seen the movie "Midnight in the Garden of Good and Evil," so we were primed.
And then, one night on Public Television, there was a documentary on Johnny Mercer, who was a native of Savannah. It was at this time we came to realize the contribution he had made to our lives through his songs. Our interest in the city was heightened.
In addition to "Moon River," he also wrote "The Days of Wine and Roses," "Charade," "I Wanna  Be Around," and many more. He was also a singer and entertainer and a co-founder of Capitol Records.
When we arrived in the city, we found that the native had been honored with a statue which is located in Ellis Square in the historic district.

His remains are in the  Bonaventure Cemetery, which apparently draws a lot of tourists, because of the many we saw there during our short visit. Mercer was born Nov. 18, 1909 and died June 25, 1976.
We also visited the Mercer Williams House Museum  at 429 Bull Street. No one in Johnny's family ever inhabited the structure. His great-grandfather Gen. Hugh W. Mercer contracted with architect John S. Norris to design the house. 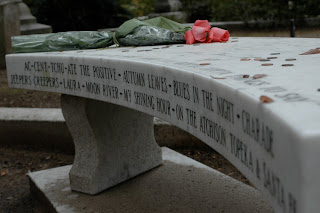 Flowers adorn bench at Mercer's gravesite
Construction began in 1860 and at the end of the Civil War, Gen. Mercer sold the unfinished house.
The structure drew a lot of attention in the book "Midnight in the Garden of Good and Evil" when it was inhabited by Jim Williams. Williams was one of the city's earliest and most dedicated private restorationists.
Time is fleeting, life goes on and my wife and I continue to be "two drifters, off to see the world."
Thanks, Johnny
Next post: Sunday, May 23, 2010
Posted by walter at 8:44 PM