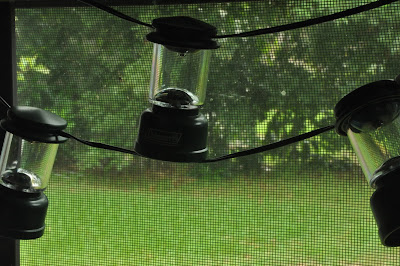 Its time to take my little Coleman, battery-operated lanterns out of storage, and pack them up for a trip to the Great Smoky Mountains National Park. They give a good glow to the campsite at night.

We've been to the Gatlinburg area twice since our camping trip last July. And here we go again.

Its been an annual event for the past 40 years (OK, we may have missed one or two years). Over the course of that time we have camped in a tent, in vans and in two pop-up campers.

Sleeping on the ground just wasn't our cup of tea after the first outing in which it rained and we got our sleeping bags and clothes wet.

We then went to a "put-up" pop-up camper that was great for that period in our life. We unfolded the unit, put up the frame and then threw the canvas cover over the top, spread it out and tied it down.

It served well for a number of years. We passed it on.

Off and on we camped in four vans over the years, having built in beds and storage areas.

And in between there was a Coachman pop-up and now a Viking pop-up.

Those Coachman was great. Unlike it, the Viking does have an air conditioner.

In less than a week we'll hit the road, making a overnighter at our sons and then to Elkmont.

Its amazing what it takes to go camping for a week. Campers take everything, including the kitchen sink.

Just entering the park brings on a different feeling. And after the camper in set up, the chairs pulled out and coffee and tea are prepared - - it's all worth it.