That's the way I would like to describe the feeling I have of the new McElroy's Seafood Restaurant in Biloxi, Ms. 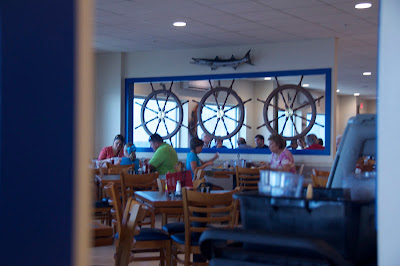 Before Hurricane Katrina in 2007, we visited McElroy's (also was referred to as McElroy's Harbor House) on Biloxi's waterfront next to the small craft harbor almost each week for breakfast. And a lot of times we made it there for supper on Friday nights.

That routine covered about a 20-25 year span and ended with the appearance of Hurricane Katrina in 2007 and the washing away of the building.

The owners, a few years following the hurricane, decided to open their restaurant in our hometown of Ocean Springs. That facility overlooks Fort Bayou.

And we made it there almost each week. And also sometimes at night.

Over the years, there was talk of rebuilding the Biloxi restaurant. And now it has come to pass. To protect it from the annual storms, it has been built high off the ground (the restaurant sits at about at the third-floor level of other buildings.)  Stairs and an elevator are available..

My basic order over the years at McElroy's has been one egg, sunny side up, a cup of grits and a biscuit and of course coffee. But lately, I have changed my order which now includes eggs, grits, bacon and coffee.

And their order of bacon beats just about anybody's anywhere. There are three really good-size slices. Their grits are the best.

Wifey likes oatmeal or an egg and toast and sometimes hot tea.

Its great that the Biloxi location has reopened. There is a feeling of nostalgia. I think about  our past visits and over the years having taken our children who now take their children.

The new restaurant wasn't fancied up. It's like home, once more.